Don't get stuck on stupid, reporters. We are moving forward. And don't confuse the people please. You are part of the public message. So help us get the message straight. And if you don't understand, maybe you'll confuse it to the people.
Lieutenant General Honore addressing reporters about New Orleans evacuation plan for Hurricane Rita


It should come as no surprise that just as it will describe terrorists as activists or militants, the Media will be equally inaccurate in other issues concerning Israel.

This week I came across 3 articles and posts that demonstrate the degree to which the media really does not seem to have a grasp of the basics when it comes to Israel.


Earlier this week, Rabbi Shafran wrote Defining History Down, about how in a video, the New York Times played down the Jewish claim to the Temple Mount in Jerusalem by describing it as merely a "claim":


But what was truly disconcerting was the narration of the Times’ video expanding on the article.  It referred to the Har Habayis as the place “that Jews call the Temple Mount…” and that “Jews widely believe was the site of the Temples.” Italics, of course, mine.

Such subtle casting of long-accepted historical fact as mere popular Jewish belief is of a sort with the subtle devaluation of “Judaism’s holiest site” the Old Gray Lady has perpetrated in the past – like when it bestowed that honor to the Western Wall rather than to the Temple Mount that lies behind it.

It accompanied the article Jews Challenge Rules to Claim Heart of Jerusalem.

Apparently Reuters is as sloppy when it comes to the geography of Jerusalem as The New York Times is. This week, Elder of Ziyon noted that Clueless Reporters, "Experts" Cannot Distinguish Temple Mount From Al Aqsa Mosque.

At issue is the caption to this photo from Reuters appearing: 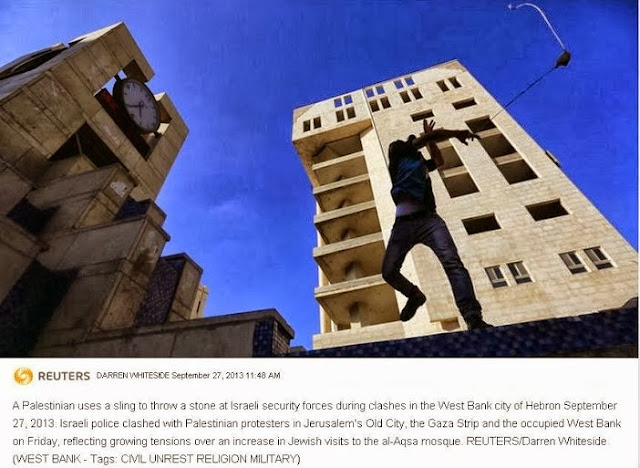 According to the caption, there are:


Only one problem: No Jews visit the Al Aqsa Mosque. Period.

Muslims like to refer to the entire Temple Mount as the Al Aqsa Mosque, and as a result Western "experts" often believe them. Here is the truth, as simply as I could show it

The next example is not about Jerusalem, but about Bethlehem. In order to illustrate a point in an op-ed Rethinking the Two-State Solution, The LA Times uses this photo: 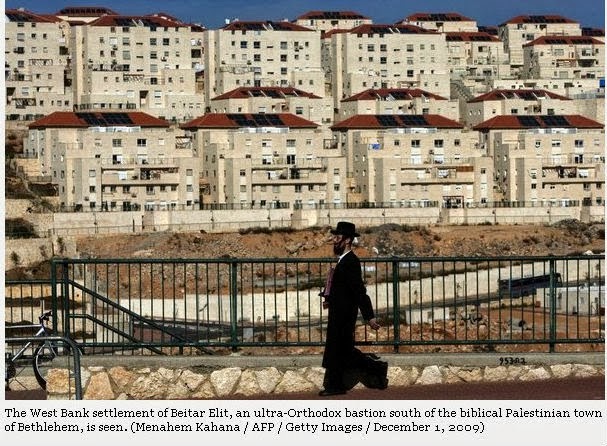 According to the caption, this is a picture of a settlement in the West Bank (Yehudah and Shomron) which is south of:


the Biblical Palestinian town of Bethlehem.

It's not clear what Bible the LA Times have found which describes Bethlehem as being in Palestine -- the Bibles I have seen do however make mention of Bethlehem being in an ancient country, reborn today, known as Israel.

Those are the 3 examples I came across this week in the Media -- which is not to say there may have been others.

As a bonus, here is a statement Joe Biden made this week about the "Palestinian" Arabs. As reported by JNS.org Joe Biden slammed for calling Palestinians ‘least ideological and sectarian’ Mideast Arabs


“In light of all these problems, some people ask us: Why Biden, why, why Obama. Why are you so set on trying to resolve the peace process?” Biden said.

“The Palestinian-Israeli issue involves the least ideological and least sectarian Arabs in the Middle East,” he said in an answer to his rhetorical question.

The problem, of course, is that Joe Biden is just flat out wrong.


In the 1920s, they initiated a policy absolutely to reject the Zionist presence; in the 1940s, they joined with Adolf Hitler; in the 1960s, they founded modern terrorism; in the 1990s, they fraudulently signed an agreement on the White House lawn; in the 2000s, they engaged in a policy of ethnic cleansing vis-à-vis Christians; and today, as a terrorist organization rules in Gaza, a large majority endorses terrorism as a tactic and retains the goal of eliminating the sovereign Jewish state.

In addition, the article notes:


A recent survey by the Pew Research Center ("Muslim Publics Share Concerns about Extremist Groups") found that Palestinians express the highest support for terrorism and terrorist groups among Muslims, despite overall drops in support of terrorist groups across the Muslim world.

According to the survey, “Support for suicide bombing and other violence aimed at civilian targets is most widespread in the Palestinian territories, with 62% of Muslims saying that such attacks are often or sometimes justified in order to defend Islam from its enemies.”

This doesn't bode well for the kind of reporting or foreign policy we will be enduring for the foreseeable future.

Email ThisBlogThis!Share to TwitterShare to FacebookShare to Pinterest
Labels: Jerusalem, Media Bias, Temple Mount, The Disaster of Obama's Policy In The Middle East