Before speaking about that pride, I simply wanted to alert my readers to a slowdown in my postings that will be taking place for the next 10-14 days.  I am well, but focused on both a personal family situation and on a major project -- about which you will hear in due course.  Please, unless it is important, refrain from writing to me during this time.

Two Israeli professors have won the Nobel Prize in Chemistry, sharing it with an Austrian Jewish American, Prof. Martin Karplus, who fled to the US before the Holocaust.


The two Israelis are Prof. Arieh Warshel, currently living in CA, and Michael Levitt, a native of South Africa with Israeli citizenship who splits his time between Israel and the US.  Warshel and Levitt are the 11th and 12th Israelis to win the Nobel Prize. 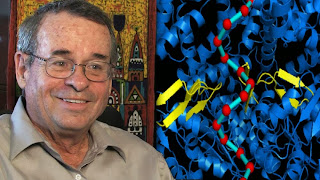 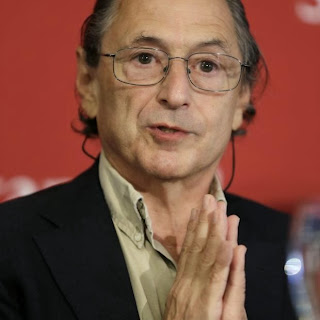 The prize is for "development of multiscale models for complex chemical systems."  As Warshel -- whose breakthrough came in 1975, when he was teaching at the Weizmann Institute here in Rehovot, Israel -- explains:


"We developed how a computer can take the structure of a protein, and can understand how it does exactly what it does -- for example digesting food. You want to understand how it is happening, and then you can use it to design drugs, or in my case, to satisfy your curiosity."

A spokesman at Weizmann clarified further:

"The work of the three laureates is a breakthrough because they have managed to settle the contradictions between classical physics and quantum physics, which is significantly different."
This represents the fourth and fifth times since 2004 that an Israeli scientist won the Nobel Prize in Chemistry.  Not bad for a little country only 65 years old, huh?

I have already written about Prime Minister Netanyahu's Bar Ilan speech and provided links to it.  Here you have another link, this one put out by BESA.  It provides the video in Hebrew, with English subtitles:

One of Netanyahu's major themes was the fact that the failure of the Palestinian Arabs to recognize Israel as the nation state of the Jewish people was a major stumbling block to peace. There would be no peace, he said, without that recognition.

Now Yasser Abed Rabbo - secretary of the PLO - has stepped forward to provide proof-positive of the veracity of Netanyahu's charge that the PA/PLO is intransigent with regard to this issue.  On Palestinian radio he called Netanyahu a "racist" and "the number one extremist in Israel" because of his demand that Israel be recognized as the Jewish state.

The Palestinian Arab leadership, declared Abed Rabbo, refuses to recognize "historic Palestine" as the "homeland of the Jewish people."

Perhaps we should thank Abed Rabbo for making the case so perfectly.

With regard to the charge that Netanyahu is a "racist," Abed Rabbo is attempting to present Israel as an exclusively Jewish.  But this is not at all the case: 20% of Israel's population is Arab and has full individual civil and human rights in the country.  What the Arabs do not have are national rights, as a people, for then Israel would no longer be the Jewish state.  This distinction, which is often distorted, is significant.
In contrast, this past July, putative PA president Mahmoud Abbas declared:


“In a final [peace negotiation] resolution, we would not see the presence of a single Israeli — civilian or soldier — on our lands.”

Read: Abbas pledges: There will be no Israelis in Palestine

Who's the racist here?

The response of the Arab League to a tentative proposal by the Czech president puts the lie to what is claimed to be the Arab position.  The Czech president's suggestion was that his country's embassy in Israel be moved from Tel Aviv to Jerusalem.

The League called this a violation of Palestinian rights.

But wait... the Palestinian Arabs are forever calling -- in English for Western consumption -- for eastern Jerusalem to be their capital.  You know, everything over the '67 line. Never mind that there are no Palestinian "rights" to any of Jerusalem, if this were a genuine demand there would be no objections to Israel's continued sovereignty over western Jerusalem.  And yet, the Arabs protest the presence of international embassies to Israel in the west of Jerusalem as well.

They want it all, folks.  Have no doubt about this.

As time and energy allow in the coming days, I want to look again at the abysmal situation with Iran.  Today I will simply mention this:

The Israel Air Force has been holding an extensive drill to test its capacity to fly remote destinations.  Declared the IDF website:


"When we say, 'all options are on the table', we're talking about military options as well. The Air Force, the longest reaching arm of the IDF, is responsible for realizing that option if it is so required. In the force, we're enforcing a range of abilities, including long-term flights. In this field the Air Force is required to develop all relevant ability, from a pinpointed activity to a wide-range action."


"In one of the highlights of the drill, where the Air Force cooperated with a foreign army, fighter jets were fueled midair." 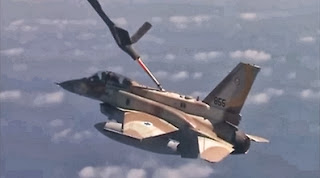 I will note here that, as I understand it, Israel also possesses fighter planes that could reach Iran without mid-air refueling.

I find this story enormously reassuring. First because we are providing the only credible military threat to Iran, and thus causing Iran to sit back and take notice. And then because it is imperative that we be prepared to do what we may yet need to do, with regard to actually hitting Iran.