The first reports emerging from the effort to relieve the Assad regime of its chemical weapons capacity suggest that the regime is cooperating with the inspectors from the Organization for the Prohibition of Chemical Weapons (OPCW). The latter organization has been tasked by the United Nations with overseeing the process of destroying Assad's CW capability.

The OPCW inspectors face a task of unparalleled complexity. Never before has a country in the midst of civil war offered up its chemical weapons capacity to international review and destruction. It is not at all clear that the inspectors will succeed.
The sincerity of the Assad regime in facilitating this process remains deeply open to question, and the logistical challenges are also enormous. 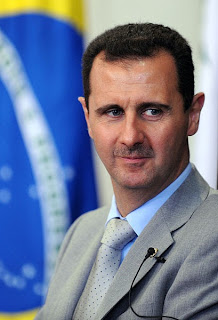 Regarding the regime's sincerity: on the one hand, the regime ought to have every interest in proving cooperative with the inspectors. The agreement whereby Syria agrees to give up its CW with one stroke transformed Assad from the potential target of Western military action to a key partner in an internationally mandated process. The agreement effectively ended any possibility of Western military intervention in the Syrian civil war. For as long as the process of verification and destruction of Syrian CW continues, it is vital that the regime survive. And this process could continue for more than a year.

However, there are two complicating elements. First, allegations have arisen that the regime is attempting to remove parts of its CW capability across the border to Lebanon — where its Hezbollah allies hold sway — and to Iraq.

A former senior officer handling chemical weapons in Assad's army, Brigadier-General Zaher Shakat, told the British Sunday Telegraph newspaper that he possesses intelligence confirming that at least one convoy of 20 vehicles carrying CW materials has crossed the border between Syria and Lebanon, transferring the material to Hezbollah.

Israeli sources, at this stage, dismiss these reports, suggesting that they form part of Syrian rebel propaganda efforts. At the same time, the possibility that the regime may at a certain stage attempt to remove CW in the direction of Lebanon or Iraq is not ruled out by Israeli officials. In particular, as autumn turns to winter and cloudy skies reduce visibility, the possibility of such actions increases. For Israel, clear evidence of the transfer of CW to Hezbollah would constitute a "red line" likely to produce a military response of the kind already witnessed four times in the course of the last year.

The second problem regarding Syria's CW capability is a logistical one. Once concentrated in a small number of sites, Syria's CW capacity is now spread between 50 to 70 separate locations. The movement of material took place when a U.S. strike on Syria seemed imminent, and was carried out by Unit 450 of the Syrian army — the main command and control center for the Syrian CW program.

It will be the task of the OPCW inspectors, in cooperation with the Syrian authorities, to locate all these sites and to oversee the process of the handing over or destruction of the CW materials there — in conditions of civil war. This is an immense challenge.

In this regard, the blithe optimism of U.S. officials and the decision of the Nobel Committee to award the peace prize to OPCW seem premature, and somewhat bizarre.

Secretary of State John Kerry went on the record on October 7, saying:


We're very pleased with the pace of what has happened with respect to chemical weapons in a record amount of time. … I think that was a terrific example of global cooperation. I think it's also credit to the Assad regime for complying rapidly as they are supposed to.

OPCW officials also praised the "constructive" attitude being taken by the Assad regime.
Such statements seem to ignore both the demonstrably questionable commitment of the Assad regime to ridding itself of its CW capacity in accordance with the international agreement on this, and the enormous difficulties inherent in the successful implementation of this in conditions of civil war. On balance, it is most likely given his previous pattern of behavior that Assad will seek to drag out the process for as long as possible while giving up something less than the entire inventory of his CW capacity.

Given the previous pattern of behavior of the current U.S. administration and the "international community," it is likely that Assad will get away with it.