The focus is on the situation in the Sinai:
Amos Gilad, head of the Political Diplomatic Bureau at the Ministry of Defense, said yesterday that Israel is in constant contact with the Egyptians and that we are being heard. 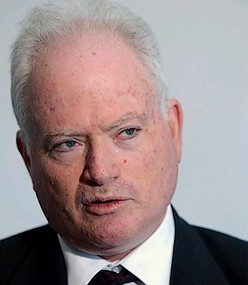 "When the Egyptians introduce weapons that are not included in the agreement we check it and we talk to the Egyptians about it. We have direct communication with the Egyptians and we have made it clear that we demand a complete adherence to the terms of the peace agreement.

"We are in constant contact with the Egyptians. They are fighting against an al-Qaida-like group of terrorists whose aim is to carry out strategic attacks that would force a confrontation between Israel and Egypt."

Read: Israel demands 'complete adherence' to terms of Egypt peace agreement
~~~~~~~~~~
Dore Gold, President of the Jerusalem Center for Public Affairs, has provided a description, cited by the NY Times, of the political/diplomatic ramifications of the situation:

"To the extent that the Egyptian government challenges the clauses of the treaty of peace with Israel, it undermines the regional peace process as a whole - it's a big deal.  If you don't state clearly what your concerns are as the Egyptians increase their forces in Sinai, you could end up with a fait accompli that undermines your most vital security interest."  (Emphasis added)

Well... it does appear that we are doing that.  Not letting any grass grow under our feet. Not turning a blind eye.  But challenging the Egyptians when they test the limits of what we will permit.
~~~~~~~~~~
With all this said, it's not quite clear to me what "we are being heard" -- the claim of Gilad -- means.  Has Egypt removed tanks that Israel said were not approved?  I've not seen pictures. Nor have I accessed any reports indicating such.
(Which is not to say that our protest is unimportant -- even if not heeded.  Not at all.  It establishes our position and sets the stage for whatever might follow next.)
~~~~~~~~~~
Ma'an -- a PA news agency -- carried a report on this situation today:

"An Egyptian military source said Wednesday that both sides were meeting at the Kerem Shalom crossing. The talks have generated 'remarkable progress.' [the source] said officials had met with Israeli military leaders in the Kerem Shalom area at least six times over the past three days.

"...Israel has indicated that it understands Egypt's position even though it opposes some of the weaponry being brought into the Sinai, the official explained."

Read: Israel, Egypt in talks over Sinai campaign
~~~~~~~~~~
In making his statement yesterday, Gilad alluded to the fact that, contrary to media reports, there are no "anti-aircraft systems" in the Sinai.
I sat up straighter when I read that.  I had picked up information on this right after Shabbat -- from Israel Radio Arab Affairs analyst Eran Zinger.  And I then confirmed it with a military journalist with excellent inside connections who told me the report by Zinger was true -- Egypt had brought anti-tank and anti-aircraft missiles into the Sinai.
So what do we make of Gilad's statement?  Could Zinger and my source have been mistaken?  As reliable as they are, they were not providing eye-witness verification, but, in turn, had to rely upon the reports of others.
But what also occurs to me is that Israel may have forced Egypt to remove this equipment.  There is, my friends, so much we don't know.
~~~~~~~~~~
If we ask ourselves precisely who our enemy is here, we begin to absorb the full ironic complexity of this situation.
Morsi, while he serves as president of a nation with which we have a peace treaty (however tenuously), can hardly be said to be a friend.  Every day additional reports of his radical agenda surface. And yet Egypt is doing battle now with al-Qaeda elements that are not only our sworn enemy, but are capable of severely destabilizing Morsi's regime.  Is this an "enemy of my enemy" situation?  That is, is there genuine cooperation possible between Israel and Egypt for purposes of eliminating or weakening a mutual enemy?
What must also be asked here is whether we know that Egypt sincerely intends to take on the jihadist terrorist elements in Sinai. My own take is that they do, precisely because the situation in the Sinai has escalated to a point where it must be taken seriously by Cairo.
And while I am not in the field and can depend only on various reports, Israeli intelligence clearly has information on what the Egyptian army is doing in the Sinai. Were there no action against jihadists by them taking place, I would assume that Israeli protests regarding equipment brought in would be far more vociferous. As it is, there seems genuine understanding on the part of Israel of what the Egyptians are attempting to do.  Look again at the Gilad statement above.
And for what it's worth, the Ma'an article cited above also reported that:

"A Sinai-based Islamist militant organization, the Salafi Jihadi Group, warned the Egyptian army last week that the crackdown on jihadis in the area would force it to fight back."

~~~~~~~~~~
Morsi, it should be noted, will be going to Iran in a week to attend the Non-Aligned Movement conference being held there; Egypt currently heads the Movement.  This will be the first visit by an Egyptian head of state to Tehran since the Islamic revolution in Iran in 1979.  Anwar Sadat, then president of Egypt, harbored the Iranian shah after he fled the revolution; the two countries have not had full diplomatic ties since 1980.
~~~~~~~~~~
Also planning to attend is UN Secretary General Ban Ki Moon. This, in spite of his having been implored by the US and Israel not to attend.  The head of the UN should not be providing credibility to a state that has sworn to destroy another state, a member of the UN.
How incredibly perverse this all is.
~~~~~~~~~~
Morsi will also be headed to Washington next month.  President Obama has extended an invitation for his Egyptian counterpart to pay an official visit to the White House in late September.
An interesting move on Obama's part, pre-election.  Let the voters beware.
~~~~~~~~~~
Alan Baker, Director of the Institute for Contemporary Affairs at the Jerusalem Center for Public Affairs and former Legal Adviser to Israel's Foreign Ministry, has written an analytic piece entitled, "Sinai, the New Egypt, and the Egypt-Israel Peace Treaty."

"The integrity of the peace relationship between Israel and Egypt, and the fact that a generation of Egyptians and Israelis have grown up without the threat of war, violence, or terror within the context of peace between the two countries, are both central factors that, by all logic, should rise above momentary political trends and emotions.

"The present challenge and threat to the integrity of the peace treaty posed by the evolving character of Sinai, from the quiet and remote buffer zone of 1979 into a staging post for terror and violence, is a challenge that can and should be handled within the context of the peace treaty. It is perhaps the most serious test of the strength of that treaty and of the capability of Egypt to prove to the world that even in an era of extreme political change, its interest is in protecting and maintaining the integrity of the peace relationship with Israel."

~~~~~~~~~~
Martin Peretz, editor-in-chief of The New Republic from 1974 to 2011 and formerly an Obama supporter, has written a blog entry in The Times of Israel -- "What Obama Talks About When He Talks About Islam" -- that is not to be missed (emphasis added):

"Barack Obama’s initial six months in the presidency were rich in symbolics. No one could have misunderstood his intention when he anointed Al-Arabiya, Dubai-based and Saudi-owned, to be the first of the world’s television networks to interview him from the White House. Not surprisingly, the reporter began by asking what Obama meant when he promised 'aggressive peacemaking between the Palestinians and the Israelis.' The president responded lamely by alluding to George Mitchell, his already-designated special envoy to the problem, as 'somebody of enormous stature... Then, two more fawning asides about Mitchell, thought of as the deus ex machina for the president’s predicament, and one allusion to King Abdullah of Saudi Arabia for having 'great courage,' a prelude to Obama’s undignified curtsy in Riyadh.

"When Obama speaks about Islam it is mostly blah, blah:

"'…the same respect and partnership that America had with the Muslim world as recently as 20 or 30 years ago, there’s no reason we can’t restore that.'

"...The third of the president’s Middle East extravaganzas at the beginning of his tenure was the speech in Cairo. One doubts that Obama would be embarrassed by his text. After all, he does not make mistakes! But maybe, if we had a secretary of state like Dean Acheson or George Shultz instead of Hillary Clinton, he could be made to be mortified by its strange medley of geeky innocence and high moral cynicism. (Have you noticed on the State Department website feature, 'Travels With The Secretary'? 102 countries, 352 travel days, 843,450 miles. This is not a formula for analytic depth.) Our chief executive clearly has no patience for depth, which may be why he and the mistress of our diplomatic corps get along so well. Even a cursory rereading of his June 2009 text would expose how deeply he does not understand the region and its doctrines, its peoples and their excuses.

"Of course, what Obama considered the most serious unsolved foreign challenge to the United States was the question of Palestine, or, to be more precise, the question of the Arabs of Palestine, now referred to as the Palestinians. The world has given them — through the United Nations with its various redundant organs (what do they all do?), the support of the sloppy moralists (like Norway, Sweden, unworthy South Africa) and the up-for-purchase so-called non-aligned — the phony backing that they see as near unanimous support. The fact is, the Palestinians are further away from having their Palestine than at anytime since 1967. Or maybe 1947. The General Assembly may in its next session sanction an Arab government called Palestine, as it did 65 years ago, when the British ran away from their Mandate while the Jews picked up half of it and turned an established society into a nation-state. What kept Arab Palestine from becoming Palestine at that time were Egypt and Jordan, and the fact that Palestinian society was a primitive and fractured collection of clans and tribes as far from nationhood as other countries which the British abandoned in the post-war period.

"...For three and a half years Obama deceived himself into thinking that somehow he had, he could, he would, with suasion and goodwill, talk the Persians into giving up the ultimate weapon. Then he did 'sanctions,' ever so slowly and piecemeal. Did the president not grasp the urgency of time? ...That is where we are now: Iran on the cusp of possession, the Arabs in agitated nowhere, the Palestinians fooling themselves that statehood is only a step or two away. And Israel? A free and pleasant place to visit and to live, with many grounds, both old and new, to worry.

Technorati Tag: Israel and Egypt and Sinai and Mohamed Morsi.