Arlene Kushner On Just How Free Israel Is To Attack Iran


Devil in the Details

Didn't expect to be able to write tonight, but (since my grandkids are sleeping,) I have decided to do at least an abbreviated post.
The first reason is to share the link to my newest article, up on Front Page:
Why Republicans Must Take the Lead on Israel: A Postscript
I consider it an important one, and ask that you read it and share it broadly.
~~~~~~~~~~
As to the "details": I am referring to the visit here of US Defense Secretary Leon Panetta, who has been in meetings with Prime Minister Netanyahu and Defense Minister Ehud Barak with regard to Iran. 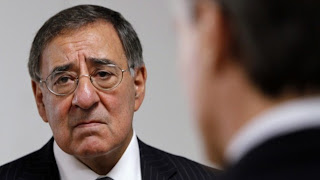 Credit: Jacquelyn Martin/AP
Needless to say, I was not present at their meetings -- don't know what agreements may have been forged or what has been said that is not for public consumption.  I have done no more than pick up various news reports with regard to what transpired, and what statements were issued by officials.
The bottom line is that, in spite of statements regarding how the US and Israel share the same concerns, there remains a difference in positions.  It has to do, in good part, with timing.  If it were a sure thing that the US, which is better equipped than Israel to do the job, was on board to hit Iran in the end, it might be different.
But it seems doubtful that there is such a guarantee, even unofficially.  And what Israeli leaders know is that if we wait too long, we will lose our opportunity to be effective.  While Panetta is saying that we should hold off and not rush.   And so, as I try to puzzle this out, I am sensitive to nuances.
~~~~~~~~~~
One report I read indicated that Panetta said the US would not permit a premature attack by Israel.  Not permit?  Excuse me?  The most he can say is that the US would not cooperate, or that there might be repercussions.  But we don't need the permission of the US government.  And that was made clear, especially by Barak, who indicated that in the end we have to decide for ourselves what to do and cannot depend on anyone else.
A confession: Repeatedly, Barak makes me really crazy. Furious.  But on certain issues he manages to deliver strong and appropriate statements, and I find myself thinking that he's got this one right.
~~~~~~~~~~
Panetta keeps insisting -- this is the Obama administration's position -- that there is still time to try more sanctions and negotiations.  While Netanyahu and Barak both indicated, however diplomatically, that this is a joke: Yes, Iran is hurting because of the sanctions, they said. But this has not motivated even a minute pullback in the Iranian push to achieve nuclear capability.  In fact, the Iranians have moved ahead even faster as they have been squeezed by sanctions. So precisely what is the point of trying still longer, as it only gives them more latitude to reach their goals?
Panetta, according to Israel Hayom, said today that, "Iran must either negotiate acceptable limits on its nuclear program or face the possibility of U.S. military action to stop it..."  And that bothered me. Even as he's attempting to "talk tough," he hedges. They shouldn't face the possibility -- how great a "possibility,"  pray tell? -- the Iranians should know that they must stop or face military action.  Period.  It's obvious where Netanyahu is coming from when he says that Iran does not take Western intentions to stop them seriously.
~~~~~~~~~~
As to Netanyahu, he made it clear today, in response to a domestic flap that I am not going to discuss here, that it is the political echelon and not the military that will make the final decision on hitting Iran, which is as it should be in a democracy.  The military takes its orders.
Then Netanyahu said that he hasn't decided yet whether to attack Iran.  This man's preference for military action against Iran, his certainty that nothing else but a military operation will work to stop Iran, is well known.  So what is he saying here?  Is this for American ears?  A reassurance that he will not move "too quickly"? And if not that, what?
And then, in one source, he was reported as saying, "If it is up to me..."  And I wondered under what circumstances it would not be "up to him."
~~~~~~~~~~
As I do not infrequently, I have posed questions here -- pointed in certain directions with regard to what must be watched and considered.  But I am very far from being able to provide answers.
One last question, before closing: Whatever the talk about giving Iran more time to come around, is the election not a major consideration for the US?  Is Obama not determined to avoid having Americans going to the polls with the nation embroiled in a new war?
And consider the quandary for Israel with regard to those elections: If we hit Iran before election day -- and the decision to do that is a distinct possibility -- and Obama wins, what will be the repercussions?  If we wait, and Romney wins, would that not be a better situation, because he'd be more likely to cooperate in a military operation>
~~~~~~~~~~
© Arlene Kushner. This material is produced by Arlene Kushner, functioning as an independent journalist. Permission is granted for it to be reproduced only with proper attribution.

Email ThisBlogThis!Share to TwitterShare to FacebookShare to Pinterest
Labels: Will Israel Attack Iran?