Arlene Kushner On The Sinai Terrorist Attack And The Implications


On Sunday evening, 35 members of a Bedouin terrorist cell broke into an Egyptian army base in the Sinai, killing some 15 Egyptian soldiers and wounding others.  They commandeered two armored jeeps, which headed to the Kerem Shalom crossing into Israel. (Kerem Shalom sits at the intersection of Israel, Egypt and Gaza.)
One of the jeeps exploded at the crossing -- likely because of explosives it was carrying -- and the other entered Israel, where it was intercepted by the IDF.  No Israelis were killed or injured.

Eight terrorists were taken out, however; of these, at least six were wearing explosive belts.  This was a sophisticated and exceedingly serious operation intent on causing disaster in a variety of venues.
Here you see just some of the weapons the terrorists -- understood to have been part of a global jihad terrorist infrastructure -- were carrying. 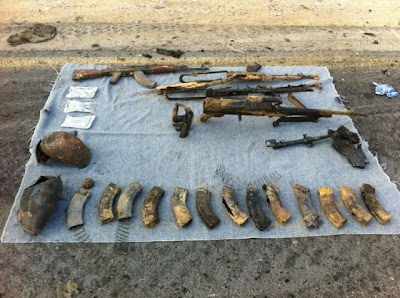 Credit: IDF spokesman
~~~~~~~~~~
Chief of Staff Lieutenant General Benny Gantz (left, below) and Brigadier General Tal Russo (second from right) toured the scene after the attack, and praised both Israeli intelligence and the fighting forces for their skill and their cooperative effort.  We're talking about IDF Intelligence forces, the Air Force, armored ground forces, infantry and the Shin Bet. 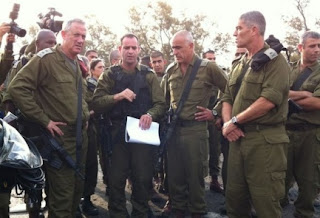 There were quite a few clashes before [the jeep] was destroyed. Armored forces, the Air Force and infantry forces closed in  and eventually it was destroyed from the air and on the ground.

Those who attempted to escape and fire at the forces after [the jeep] was destroyed, were also eliminated,"

~~~~~~~~~~
There are several implications that follow from this incident.
First is the way that this impacts the Egyptians.  It's one thing for them to turn their back on terrorists who are harbored inside the Sinai with intention to cross the border into Israel and hit Israelis.  It's quite another when terrorists hit an Egyptian army base and kill Egyptian soldiers.
Defense Minister Barak referred to this as a wake-up call for Egypt.  The expectation is that Egypt will begin to act seriously with regard to regaining control of the Sinai.
~~~~~~~~~~
And indeed, this morning 100 Egyptian troops surrounded the village of Sheikh Zuweid village -- located in northern Sinai, between Arish and Rafah -- where "militants" were known to be hiding, and killed 20.  This was accomplished via strikes by helicopters, for which the Egyptians had received prior permission from Israel. This represents the first such air strike by Egypt in the Sinai since 1973.  Earlier, there had been an action against terrorists in Arish.
All of this is part of what has been dubbed the "Sinai cleansing operation," with other action still anticipated in Rafah, which sits on the border with Gaza.  Egyptian security estimates there are 2,000 jihadists terrorists in the Sinai.
~~~~~~~~~~
Because the region of Sinai in which the battle with terrorists is taking place is in the north, near Israel, it was particularly important that Egypt seek Israeli consent before bringing in heavy military equipment.  (More on this below.) 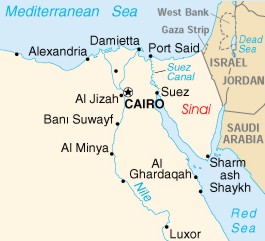 Technorati Tag: Israel and Gaza and Sinai and Egypt.

Email ThisBlogThis!Share to TwitterShare to FacebookShare to Pinterest
Labels: Attacks On Israel From Gaza and Sinai