Nasrallah and Hezbollah Could Be Relocating To Iran

Don't look now, but it appears that Iran is considering moving its terrorist group Hezbollah out of Lebanon. It seems that with the uncertainty of the civil war in Syria, Iran thinks that Hezbollah itself could be in jeopardy.

But is Nasrallah worried?
What do you think? 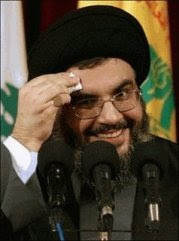 In any case, Hezbollah may be leaving Lebanon for Iran:

The paper, A Siasa, explains that the Iranian leadership has been weighing two possible courses of action, in case Iran's protégé and partner Assad is toppled.

The first option includes supplying Hizbullah with state-of-the-art heavy weapons and enlarging the number of Iranian soldiers in Lebanon. This option would have strengthened the Iranian presence in Lebanon as compensation for the loss of Iran's Syrian ally.

The second option is to evacuate all Iranian Revolutionary Guard soldiers from southern Lebanon and Beirut, and to relocate Nasrallah and other senior commanders from Beirut to Tehran, for fear they would be assassinated if Assad's regime falls.

A Siasa says Iran has apparently chosen the second option.

If true, that would be an immediate benefit to both Lebanon and to Israel.

For Lebanon, it creates the possibility for real stability that the country has been denied for decades.

For Israel, besides removing a terrorist and military threat in general, it would also remove a threat to Israel's oil fields at sea.

There is a downside for Iran: think of all of the safe houses Ahmadinejad is going to have to build for Nasrallah to hide in!

Technorati Tag: Israel and Lebanon and Hezbollah and Iran.

Email ThisBlogThis!Share to TwitterShare to FacebookShare to Pinterest
Labels: Problems of Hezbollah