Oval Office Photo: Is Obama Taking A Bat To Erdogan?

"We released the photo with only one purpose in mind, to highlight the President's continuing close relationship with Prime Minister Erdogan and draw attention to the important conversation they had about the worsening situation in Syria," she said.
White House spokeswoman Caitlin Hayden

Photos of Obama in the Oval Office are supposed to convey a presidential image, showing President Obama at work tackling important issues.

But every once in a while, a picture of Obama comes out that seems to upset our allies.

Back in 2009, a picture of Obama on the phone with Israeli Prime Minister Netanyahu came out. The image of Obama with his feet on the desk, talking to Netanyahu was insulting:


Israeli TV newscasters Tuesday night interpreted a photo taken Monday in the Oval Office of President Obama talking on the phone with Israeli Prime Minister Benjamin Netanyahu as an "insult" to Israel.

They saw the incident as somewhat akin to an incident last year, when the Iraqi reporter threw a shoe at President Bush in Baghdad.


Israel Matzav noted that a recent picture of Obama on the phone with Abbas showed Obama being more presidential. 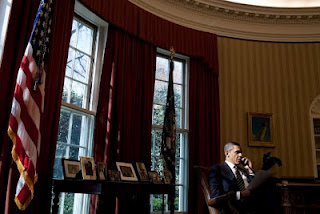 Considering the uproar back in 2009, and the fact that we really have not heard much ado about Obama's Oval Office pictures since then, you would have thought that Obama had learned his lesson early on and was not making those sort of mistakes any more.

But you'd be wrong.

Now Obama has offended Turkey, by being pictured holding a bat while talking to his best buddy Erdogan. 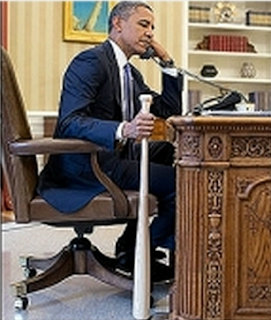 Turkey is furious at the picture of bat-holding Obama talking to Erdogan:


A photograph of U.S. President Barack Obama holding a baseball bat while talking on the phone to Turkish Prime Minister Tayyip Erdogan was intended to show their close relationship, a White House spokeswoman said, after the photo caused a stir in Turkey.

The two leaders spoke on Monday, July 30 to discuss the crisis in Syria, after which the photograph of Obama seated at his desk, talking on the phone while holding a bat autographed by black-American baseball great Hank Aaron, was released by the White House.

"The photo reveals from whom our Prime Minister receives orders to rule the country," Metin Lutfi Baydar, a lawmaker with Turkey's main opposition party the Republican People's Party (CHP), said in a statement.

CNN reports that the photo is not going unnoticed overseas outside of Turkey either:


The photo is getting quite a bit of attention in overseas publications wondering about "hidden messages" or the "symbolic meaning" of the president holding the baseball bat.

One assumes the symbolism is not that Obama took a swing at solving the Syrian civil war and whiffed.

No word on how Erdogan himself took this, but I doubt he will be commiserating with Netanyahu any time soon.

Or it doesn't and Obama is just casual that way. But Erdogan is mortally offended by the sun rising in the east and setting in the west too and shines over Israel. He's outraged that the tides come and go and the water has touched Israel. He furious that the east wind the west wind and the north and south winds haven't apologized to Erdogan personally for blowing too hard or too little. So if he sees a picture with a bat, who knows? Maybe it's offensive allusion to a disasterous Turkish battle called The Battle of the Louisville Slugger. We don't know or care. But it could be this event or any other. Because that's what Erdogan does.