People are accusing NBC of racism is being accused of racism.
The reason?

Right after a segment where Bob Costas spoke about Gabby Douglas's Gold Medal in gymnastics, NBC had the misfortune of running a promotion featuring a monkey.


Association is not causation. That a commercial about a monkey show ran after an announcer talked about a black person does not show that the commercial was run in order to draw inappropriate comparisons.

NBC, needless to say, says it was just a coincidence with no bad intent.

By the same token, he notes how loosely NBC plays the race card itself:


I’d like to feel sorry for NBC for coming under such a plainly false accusation of racial intent. Except it’s what NBC does to others all the time, including when dealing with Mitt Romney:

MSNBC now is almost all race card all the time:


This is not the first time a monkey caused such an uproar.


Back in February, 2009, this cartoon by Sean Delonas caused a similar uproar: 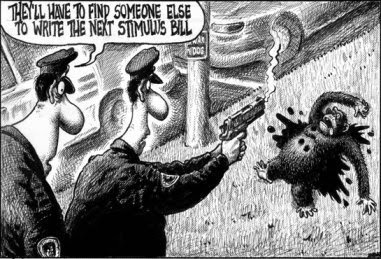 The Huffington Post seems representative of the general reaction:


A cartoon likening the author of the stimulus bill, perhaps President Barack Obama, with a rabid chimpanzee graced the pages of the New York Post on Wednesday.

The drawing, from famed cartoonist Sean Delonas, is rife with violent imagery and racial undertones. In it, two befuddled-looking police officers holding guns look over the dead and bleeding chimpanzee that attacked a woman in Stamford, Connecticut.

At least in the last paragraph, the more benign explanation is (begrudgingly) offered:


At its most benign, the cartoon suggests that the stimulus bill was so bad, monkeys may as well have written it.

This outcry is reminiscent of the (over)reaction to a comment made by Howard Cosell when, during a Monday Night Football telecast in September 1983, he said "look at that little monkey go", in reference to a play by black wide receiver Alvin Garrett of the Washington Redskins.

The Washington Post notes that there was less to Cosell's remark than meets the eye:


He said at the time he used the expression as a term of endearment, that he called his own grandchildren little monkeys all the time and had said it before on the air. In fact, in a 1972 telecast, he had also described Mike Adamle, a Caucasian running back for the Kansas City Chiefs, as a "little monkey" during the broadcast.

In both cases, the damage had already been done. Predictably, Sharpton jumped on board with a condemnation of the Sean Delonas cartoon. Apparently, no one cares that it was Pelosi and not Obama who was behind the writing of the bill. More than that--Sharpton claimed:


The cartoon in today's New York Post is troubling at best given the historic racist attacks of African-Americans as being synonymous with monkeys.

If you want to go by history, both the Koran and the Nazis use the image of the monkey to diaparage others.


Apparently, people also don't care about all presidents who are compared to monkeys either.
I don't recall the outrage at the many cartoons, graphics and even teeshirts comparing President Bush to monkeys.

The current backlash against NBC, such as it is, will be temporary.
Pity we cannot say the same about NBC's attacks on Romney.