What I am referring to is the barrage of material coming into my in-box from readers, much of it connected to the issues of the attacks on US installations abroad, the dangers of radical Islam and Obama's take on all of this.

The first thing I note is that I do not do rumors, nor am I likely to share information what "might be true" but is not corroborated or is highly speculative. Thus, I will not be talking about what US Ambassador to Libya John Stevens may have done or what may have been done to him before he was killed.  Right now, at least, I will not go there, and perhaps never.

In line with the issue of unsubstantiated rumor, I want to mention an e-mail that is making the rounds of the Internet and has now been sent to me more times than I care to count. This is ostensibly written by someone whose brother is a minister living in Jerusalem and sees multiple signs that Israel is about to go to war.  Perhaps, indeed, we will hit Iran, but this letter is a hoax, as a close examination of its claims makes clear. Please, if you come into possession of it, do not pass it on.  It serves no good purpose.

What I do want to mention -- which I passed by yesterday in making the case for the failings of the Obama foreign policy -- is that the anti-US riots have spread in the Muslim world past the original Egyptian and Libyan embassies:


On Monday, Hezbollah led massive demonstrations in Beirut against the ostensible film, produced in the US, that insults Mohammad.   The crowds were estimated to be enormous -- 500,000 is the figure I saw, according to Lebanese police.  Most startling is that Hezbollah leader Sheikh Nassan Nasrallah appeared in public to address the crowd.  "The world should know that our anger is not a passing thing. ... This is the start of a serious campaign that must continue all over the Muslim world in defense of the prophet of God."

There have been demonstrations, some violent, against the US in Yemen, Tunisia, Bangladesh, India-controlled Kashmir, Pakistan and Afghanistan.  The picture below was taken in Cairo. 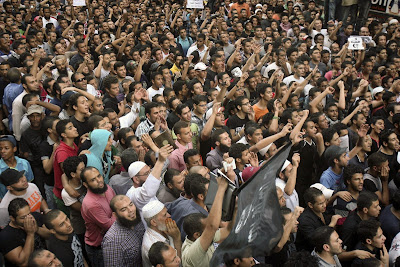 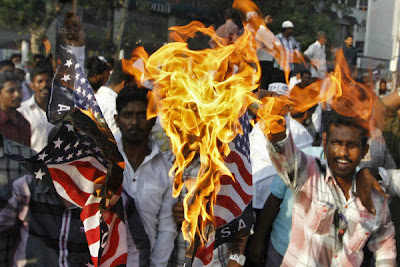 As the JPost put it last Friday:


"The intensity of the popular anger across the Muslim map has taken President Barak Obama's administration by surprise and presents a tremendous challenge to the US president's mission, outlined in Cairo in June 20098, of mending fences with the Islamic world."

Many analysts are convinced that this is not about the film at all.

"It was bad enough, two years ago, that Defense Secretary Robert Gates called fringe Florida pastor Terry Jones to ask him not to burn copies of the Koran, or last week, that chairman of the Joint Chiefs Gen. Martin Dempsey took his turn to call Jones to ask him to stop publicizing a YouTube video, The Innocence of Muslims. But then on Friday, White House spokesman Jay Carney told the world that the violent protests in Cairo and Ben­ghazi and elsewhere were a 'response not to United States policy, and not obviously the administration or the American people,' but were “'in response to a video, a film we have judged to be reprehensible and disgusting.' Carney repeated the point for emphasis: 'This is not a case of protests directed at the United States at large or at U.S. policy, but in response to a video that is offensive to Muslims.'

"Carney’s comments lie outside the range of plausible spin, even by Obama administration standards, and if his bosses believe them—as we fear they do—are simply delusional. But they are not without consequence. Nor are Gates’s and Dempsey’s phone calls. They all send the message to America’s enemies that if you kill our diplomats and lay siege to the our embassies, the first move the American government will make is to denounce .  .  . Americans. Our leaders apparently believe that the way to protect Americans from extremists and terrorists abroad is to tell other Americans to shut up.

"...To debate the right of an American to criticize religion does not indicate sophisticated sensitivity to the feelings of others but a willingness to turn tail and abandon our principles at the first sign of a fight. And to take seriously the notion that all those riots and attacks are about a video, not about American principles and power and policy, is silly.

"What we have seen unfold in the Middle East over the last week is what distinguishes the region’s societies from our own. The protests in Cairo and Benghazi were not really about the film, the preacher, or Muslim sensitivities. They were an exercise in raw power politics, partly aimed at intramural rivals in the Arab political sphere, but mainly against the United States.

"If the reaction of U.S. officials in the face of such an assault is to 'condemn .  .  . efforts by misguided individuals to hurt the religious feelings of Muslims' (the initial response of the U.S. embassy in Cairo) and to try to silence individual citizens, there is good reason for the terrorists to believe that, with more acts of terror, they will also change American policies. The unpleasant fact is that the Obama administration has encouraged our adversaries to keep at it.

"...The same Joint Chiefs chairman who told journalists in London that he doesn’t want to be “complicit” in any Israeli strike on Iran’s nuclear facilities now advises an American citizen to stop alienating Muslim mobs.

"...It would be nice to have an American administration that stood up for America, for its people and its principles. It would also make the world far less dangerous for Americans—and for decent people of all faiths."

Read: The Video Didn’t Do It

Others have pointed out that there were warnings that the Americans chose to ignore.  Haaretz says (emphasis added):

"For months before the most recent attacks on U.S. embassies in North African states, Foreign Ministry and U.S. State Department officials had been arguing over developments in these countries. Senior figures in Jerusalem claimed that Washington was burying its head in the sand and ignoring the increasing radicalization in states such as Tunisia and Egypt. The Obama administration, which since the beginning of the Arab Spring has aided, directly or indirectly, the forces that brought down the dictatorial regimes in Egypt, Tunisia, Yemen and Libya, now finds itself in a position of helplessness...

"...Senior Foreign Ministry officials say their conversations with their Washington counterparts have focused on what Jerusalem terms 'radicalizing trends' against not only Israel but also against the United States and the West in general.

"One of the most recent such meetings took place a week ago, during a visit to Jerusalem by the acting Assistant Secretary of State for Near East Affairs, A. Elizabeth Jones.

"'The Americans were constantly trying to supply explanations and excuses for events in the post-revolution Arab states, and simply ignored the problems,' one senior Israeli official said, adding, 'In practice the administration's ability to affect events in the Arab world has decreased immensely.'"

"...while operations [begun by President Bush against Islamic terror] continued on the ground, an ideological sea change was taking place in the White House. Obama appeared determined to woo Arab and Islamic nations – witness his Ankara and Cairo speeches. He went as far as to distort American history to praise what he called the contribution of Islam to the development and progress of the United States – and went a step further when he asserted that there was no Islamic terrorism and that the United States was fighting 'criminals' of an unspecified nature.

"US Army manuals no longer mentioned Islamic terrorism; neither did those of the CIA and other security organizations.

"This at a time when terrorists and terrorist organizations were proclaiming daily that they were working in the name of Islam and that their objective was to topple democracy, their principal enemy.

"Now isn’t America the standard bearer of democracy today? Which begs the question: How can you fight a determined and fanatic enemy such as Islamic terrorism while ignoring its nature and its aims? On the one hand, fighting 'anonymous' terrorists in Arab and Islamic countries, on the other, making an all out effort to appease the proponents of the very Islamic ideology which gave birth to this murderous terrorism.

"The dramatic outcome of the attacks in Benghazi and Cairo are to a large extent the result of this ambiguity. Obama apparently believed that through his dialogue with the Muslim Brothers, his support of the move to topple Hosni Mubarak and NATO’s contribution to the downfall of Muammar Gaddafi, he was protecting America against terrorist attacks.

"...how can one explain that there was no tightening of security in every American representative legation in the world, and specifically in Arab countries, on the anniversary of 9/11? It is well known that the anniversary of a terrorist attack is often the occasion for new attacks. For Israel such days always see reinforced security in strategic points and embassies around the globe.

"...The attacks in Benghazi and Cairo did not come out of the blue. There had been warnings.

"On September 10, the Egyptian daily Al-Fajr published a communiqué signed by several jihadist organizations such as Egyptian Islamic Jihad, Gamaa Islamiya and others, announcing that they were going to set fire to the American Embassy in Cairo and to capture whoever remained alive if the United States did not release all the jihadists jailed in Guantanamo as well as the blind Sheikh Abdel Rahman...

"...That is not all. On the morning of the 11th, further communiqués received by public institutions indicated that after 5 p.m. that day there would be a demonstration against the American Embassy to protest against a hitherto unknown film insulting the prophet produced in the United States probably by Copts who had migrated there to flee persecution at home. Yet even this new communiqué did not bring about a tightening of security round the place."

Read: Analysis: Cairo = Benghazi: The writing on the wall

Add all of this, my friends, to the indictment I leveled against Obama yesterday.  He has failed America.  For ideological reasons he has supported and sided with Islamic elements in the Middle East and then failed to note -- or chose to ignore -- warnings of the damage that those elements were about to inflict on American installations and personnel.  He has not adequately protected American interests abroad nor properly defended the rights of American citizens.

[Note: one very astute reader picked up on the warnings of violence against US installations, and I salute him for this.]

See my website at www.arlenefromisrael.info  Contact Arlene at akushner18@gmail.com
This material is transmitted by Arlene only to persons who have requested it or agreed to receive it. If you are on the list and wish to be removed, contact Arlene and include your name in the text of the message.

Email ThisBlogThis!Share to TwitterShare to FacebookShare to Pinterest
Labels: Anti-US Riots In Muslim World, Muslim Extremists Attack US Embassies In Egypt and Libya

Of course Obama will study the map and realize that the only place they're not burning down the American embassy is Israel. Ergo time to bash the Jews so more.

But there have been protests in both Tel Aviv and Jerusalem.

No not really. Not unless someone thinks that the Occupy Wall St people are some kind of angry mob tossing flaming bottles.