Is There A Media Blackout On Those Muslim Riots?

Back on September 14, after a few day of Muslim riots -- including the burning of the US embassies in Cairo and Benghazi and murder of US Ambassador to Libya Christopher Stevens -- The Atlantic's AtlanticWire came out with A Map of Muslim Protests Around the World:


If you can't keep track of all the Muslim protests erupting across the globe, you're not alone. The uproar over a 14-minute anti-Islam YouTube video has sparked furious protests from Somalia to Egypt to Sudan to Tunisia to Libya to Bangladesh to Indonesia to Pakistan. With new reports of protests surfacing every minute, we've compiled the latest reported incidents into this handy interactive Google Map. Click the locations and embedded links for more details about each incident.

The map was updated for the next 3 days, the last day apparently being September 14th, by which time the map looked something like this: 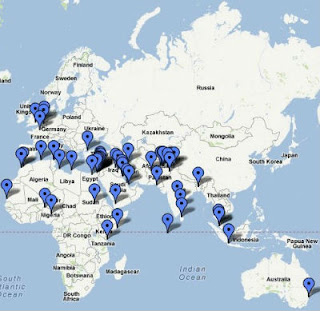 Here we are 10 days later -- have there been any riots since then?
You could be excused for thinking they did.

But Jim Geraghty writes The Islamist Protests Outside Our Embassies Aren’t Tapering Off:


Check your favorite mainstream U.S. news publications and see if they have any coverage of angry Muslim protests outside American embassies, consulates, and other institutions associated with the United States.

No? If there’s no coverage, it doesn’t mean they didn’t happen:

Geraghty then lists the latest Muslim protests that have broken out over the weekend -- some of which have been peaceful, though not all:
Read the whole thing for more details and links.

No, those Muslim riots have not stopped at all.

The question is, why is the media not reporting on them regularly?
Better yet, do you think that if the president happened to be a Republican that maybe the media would find the wherewithal to report on those riots?