Yes, The US Spies On Israel Too

"It is no secret that despite intelligence cooperation and an understanding between the two countries that they will not spy on each other, both Israel and the United States have been involved in such actions." 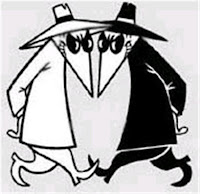 If anything, when it comes to Spy vs. Spy, the US seems to have the upper hand over Israel:


The United States broke an Israeli code and tapped the secure phone line in the Israeli Embassy in Washington without Jerusalem's knowledge.


That revelation about Israeli-American relations did not come from WikiLeaks, but rather from former ambassador to Washington Itamar Rabinovich, in a radio interview yesterday.

...After the Americans broke the code, Israel's deepest policy secrets were apparently exposed.

While Jonathan Pollard was caught--how many spies working on behalf of the US have been caught?
The answer is: none.


As far as is known, American spies have not been caught by Israel's intelligence services, although there have been instances when U.S. intelligence operatives contacted Israeli citizens and explored the possibility of recruiting them.

The Americans have also used their military attaches to gather information.

One more reason that it is long past due for the US to release Jonathan Pollard and send him home.

Note: Check out this story in Vanity Fair of the FBI spying on Turkish nationals:


The translation department Edmonds joined was housed in a huge, L-shaped room in the F.B.I.’s Washington field office. Some 200 to 300 translators sat in this vast, open space, listening with headphones to digitally recorded wiretaps. The job carried heavy responsibilities. “You are the front line,” Edmonds says. “You are the filter for every piece of intelligence which comes in foreign languages. It’s down to you to decide what’s important—‘pertinent,’ as the F.B.I. calls it—and what’s not. You decide what requires verbatim translation, what can be summarized, and what should be marked ‘not pertinent’ and left alone. By the time this material reaches the agents and analysts, you’ve already decided what they’re going to get.”
[Hat tip: LBD]

And of course, thanks to Wikileaks, we know How Hillary Clinton ordered U.S. diplomats to spy on UN leaders