Video: Mary Poppins Recut As A Horror Movie Trailer--And How It Applies To Israel

I posted this back in 2007 and came across it while looking for another post.

Back then, I posted it with anti-Israel propaganda in mind--particularly the kind that is twisted out of context to present a very different and distorted picture.

The video also happens to be very well done.


Recall the famous photo that led to the founding HonestReporting: 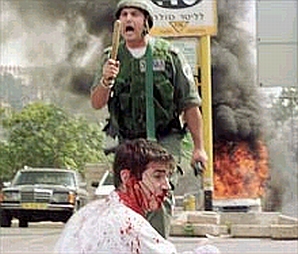 A favorite of the anti-Israel left-wingers is to take Israeli quotes out of context--for example quoting Menachem Begin:


"The Egyptian army concentrations... did not prove that Nasser was really about to attack us. We must be honest with ourselves. We decided to attack him."

This is used to prove that the 1967 war was not a war of self-defense.

In fact, the quote is cut off. The full quote is:


In June 1967 we again had a choice. The Egyptian army concentrations in the Sinai approaches do not prove that Nasser was really about to attack us. We must be honest with ourselves. We decided to attack him.

This was a war of self-defence in the noblest sense of the term. The government of national unity then established decided unanimously: We will take the initiative and attack the enemy, drive him back, and thus assure the security of Israel and the future of the nation.

And of course there is a whole slew of other examples--and that is without talking about faked photos and the like.

The length these people will go to attack Israel--now that's scary.