Arlene Kushner On US Refusal To Admit Diplomatic Failure With Iran

I am alluding to the efforts of the US government to pretend that responding to Iran's nuclear development NOW has not become an imperative.  Officials are twisting themselves into pretzels to avoid the obvious (because it would require military action before the election).  It would be funny if it were not so very critical and pathetic.
As of Thursday, Reuters was reporting that:

"The United States still believes that Iran is not on the verge of having a nuclear weapon and that Tehran has not made a decision to pursue one, U.S. officials said on Thursday...


"'We believe that there is time and space to continue to pursue a diplomatic path, backed by growing international pressure on the Iranian government,' [a White House National Security Council] spokesman said. 'We continue to assess that Iran is not on the verge of achieving a nuclear weapon.'"

"According to a Friday report by Yediot Ahronot, top US officials, who are privy to the relevant intelligence shared by Israel and the United States, said that Tehran is rapidly approaching the 'immunity zone' – the critical point in time after which the Islamic Republic's nuclear program will no longer be vulnerable to a military strike. (Emphasis added)

"The National Intelligence Estimate (NIE) report, recently submitted to the White House, paints a bleak picture, as it indicates 'a significant progress' in Iran's 'arms group' – the people and facilities focused on the manufacturing of a nuclear warhead.

Read: NIE: Iran approaching immunity zone
~~~~~~~~~~
Today's Israel Hayom is even more specific with regard to what the Iranians are doing:

"Efforts to attach a nuclear warhead to ballistic missiles..."

"White House Spokesman Jay Carney said Friday that the U.S. would know whether Iran was close to building a nuclear weapon.

"'I would also say that we have eyes — we have visibility into the program, and we would know if and when Iran made what’s called a breakout move toward acquiring a weapon,' said Carney.

The notion that the US should depend on this UN agency -- which has fallen down so badly with regard to Iran -- to report on Iranian breakout towards acquiring a weapon is a very very sick joke.

"Senior Israeli officials have expressed themselves anonymously, but harshly, against the Obama administration, saying that it is clear to everyone involved that the desired decisions could be made but are not because of the presidential elections in November."

Read: 'Iran boosts ability to attach nuclear warheads on missiles'
Don't ever believe that Obama has Israel's back. Obama has Obama's back. Period.
~~~~~~~~~~
The differences between Israel and the US -- which I've discussed before -- are clearly growing with regard to how long it possible to wait before hitting Iran.  Israel wants to stop Iran before it is capable of mounting a nuclear warhead on a missile.
The US, claiming it will know when this is about to happen, is prepared to wait until Iran actually makes the move to do so.
With regard to Carney's assertion that the US will know if Iran makes that "breakout" move, Israel's Channel 2 News quoted "sources in Jerusalem" as saying that the Americans "didn’t see 9/11 coming."
And what happens if by then -- even assuming the US would know -- Iran has buried everything so deeply underground that an attack is much more problematic and it is suddenly too late?
~~~~~~~~~~
Historian Benny Morris has written a commentary on the situation -- "Stop Iran at all costs" -- that is notable because Morris's reputation is as something of a left-wing dove (though he's changed of late):

"Israel's reasons for a future strike on Iran's nuclear facilities are logical and clear: Iran armed with nuclear weapons threatens Israel's existence; the weapons can fall into the hands of terrorists; and it will undoubtedly ignite an arms race in the Middle East that could end in nuclear war. In light of these threats an Israeli government that chooses to sit by and do nothing will have betrayed its public." (Emphasis added)

Read: Stop Iran at all costs
~~~~~~~~~~
At today's weekly Cabinet meeting, PM Netanyahu -- responding to recent criticism regarding Israeli homefront preparedness -- said the country had made great strides: including the Iron Dome, the Arrow and other weapons systems, and perhaps the most advanced warning system in the world.
This does not mean there will be no problems, he said, but all those problems are "dwarfed" by the threat of a nuclear Iran.
~~~~~~~~~~
The news with regard to terrorists in the Sinai continues to take significant and complex turns.
When the Brotherhood's Morsi assumed the presidency of Egypt, Hamas celebrated, and it was assumed that this jihadist group would forge strong ties with him.  But, as we've been seeing, this scenario has been turned on its head:
The London-based Arab newspaper Al-Sharq Al-Awsat reported yesterday that a senior Egyptian official said that there is evidence that terrorists involved in the attack that killed Egyptian soldiers last week  used Hamas-controlled smuggling tunnels in Gaza to cross into the Sinai.
Allegedly Izz al-Din al-Qassam Brigades operatives have been implicated as having had knowledge of the attack: Izz al-Din al-Qassam is the military wing of Hamas.
~~~~~~~~~~
While Egypt Independent reports that a forensic investigation "suggests" that the uniforms of those who attacked in the Sinai were made in Nablus.
Read: Forensics report gives clues to identity of Sinai attackers
Where this is going is not clear.  Nablus is in a PA-controlled area, not in Hamas-controlled Gaza.
~~~~~~~~~~
Meanwhile, the Palestinian Authority, which is clearly ecstatic about the increasing tension between Egypt and Hamas, insists that some of the terrorists in the attack did come from Gaza and has even provided Egypt with names of suspects.
The PA is now calling on Egypt to destroy the tunnels between Gaza and the Sinai.
Hamas, Khaled Abu Toameh reports in the JPost, has accused PA President Abbas of "cheap opportunism," while Hamas official Salah Bardaweed referred to the PA call as "immoral and irresponsible."
The drama is high indeed.  And that is not just with regard to words and accusations: the Egyptian army is still attacking terrorists sites in the Sinai.
~~~~~~~~~~
Morsi says he's in charge of the operation. And indeed, it does seem to be the case that he is!
For the big breaking news is this -- out as I am writing:  Morsi has just "retired" Field Marshal Hussein Tantawi as chief of staff and minister of defense. Tantawi served as defense minister under Mubarak for 20 years and headed the ruling Military Council for 17 months since Mubarak was ousted.
You see Tantawi to the left, with Morsi, here: 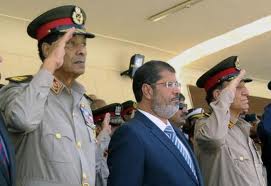 Credit: acus.org
New defense minister is Abdel-Fattah el-Sissi, but I have no information on him, as yet.
~~~~~~~~~~
Once again, because of the multiplicity of subjects to address, I am tabling further exploration of the conclusions of the Levi Report -- with regard to the legality of  "settlements" in Judea and Samaria.  This is something I will be addressing at length.
~~~~~~~~~~
Here, I will end with an upbeat message: Romney's choice of Paul Ryan as VP candidate is looking good:
Read what National Review editors have to say about his selection (with thanks to Judith N.):

"Governor Romney has made an inspired choice.  Paul Ryan will make an excellent running mate and, if elected, vice president.  What is most gratifying about the decision, however, is what it says about Romney himself.

"Romney could have decided to run a vague and vacuous campaign based on the idea that the public would default to the out party in a bad economy. By selecting Ryan, he has ensured that the campaign will instead  to a significant degree be about a conservative governing agenda.

"Romney could have rested his argument against Obama on the poor economic results of his time in office. Paul Ryan is the Republican who has made the most pointed critique of the philosophy that underlies Obama's economic policies...Solyndra is not just a scandal, Ryan notes: It is the kind of crony-capitalist fiasco to which Obama’s view inevitably leads.

"...Conservatives, and not just the Romney campaign and the Republican apparatus, will have to stand ready to fight back against the distortions that are sure to come -- indeed, have already begun.  Democrats will say that Romney-Ryan is a ticket committed to 'dismantling' Medicare (by ensuring its solvency); that it would leave the poor to fend for themselves (by extending the successful principles of welfare reform); that their only interest is to comfort the rich (whose tax breaks they wish to pare back).  These are debates worth winning, and they can be won.

"The first question any vice-presidential pick must answer is whether he is ready to become president should disaster strike. Fiscal disaster is striking. A mark of statesmanship is to face mathematical reality and make hard choices in its light. Romney has chosen a running mate who is more presidential than the incumbent." (Emphasis in the original)

Read: Just the Ticket
~~~~~~~~~~
© Arlene Kushner. This material is produced by Arlene Kushner, functioning as an independent journalist. Permission is granted for it to be reproduced only with proper attribution.
-----
If you found this post interesting or informative, please


Technorati Tag: Israel and Egypt and Iran and Romney and and Paul Ryan.

Email ThisBlogThis!Share to TwitterShare to FacebookShare to Pinterest
Labels: Countdown To Iran Going Nuclear, Egypt and The Sinai Terrorist Attack

It's painfully obvious that Obama and Iran reached a quiet detente about a year ago. Iran agreed not to test a nuclear weapon before election day and in exchange Obama would not respond with force. Between Nov and Jan-Feb you'll see a nuclear test by Iran.