Sometimes a situation is so horrific that it renders one speechless.  Such was the attack by Israeli Arabs on innocent Jews praying in Jerusalem this morning.  And so, I’m going to start with photos, which provide greater impact than my words alone would.

Once I would have apologized for provided such graphic illustrations.  No more. The world must “get the picture,” figuratively as well as literally. 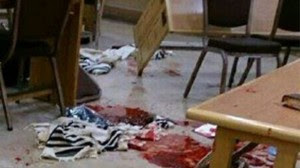 MEQ 2005 Article on Beheading in Islamic Theology and History

The following by Timothy R. Furnish is reposted here with the permission of the Middle East Forum:

Beheading in the Name of Islam


Images of masked terrorists standing behind Western hostages in Iraq and Saudi Arabia have become all too common on Arabic satellite stations such as Al-Jazeera and Al-Manar. Islamist websites such as Muntadiyat al-Mahdi[1] go further, streaming video of their murder.

The February 2002 decapitation of Wall Street Journal reporter Daniel Pearl, true to its intention, horrified the Western audience. Chechen rebels, egged on by Islamist benefactors, had adopted the practice four years earlier,[2] but the absence of widely broadcast videos limited the psychological impact of hostage decapitation. The Pearl murder and video catalyzed the resurgence of this historical Islamic practice. In Iraq, terrorists filmed the beheadings of Americans Nicholas Berg, Jack Hensley, and Eugene Armstrong. Other victims include Turks, an Egyptian, a Korean, Bulgarians, a British businessman, and a Nepalese. Scores of Iraqis, both Kurds and Arabs, have also fallen victim to Islamist terrorists' knives. The new fad in terrorist brutality has extended to Saudi Arabia where Islamist terrorists murdered American businessman Paul Johnson, whose head was later discovered in a freezer in an Al-Qaeda hideout. A variation upon this theme would be the practice of Islamists slitting the throats of those opponents they label infidels. This is what happened to Dutch filmmaker Theo Van Gogh, first gunned down and then mutilated on an Amsterdam street,[3] and to an Egyptian Coptic family in New Jersey after the father had angered Islamists with Internet chat room criticisms of Islam.[4]

From the About Page of "Hamas On Campus":


HamasOnCampus.org was set up by a group of students from different campuses across the USA and Canada.
We represent both Jews and non-Jews, left and right, liberal and conservative. We value freedom of speech, women’s rights and human rights. For this reason we are disturbed by the increasingly radical behaviour and rhetoric by Hamas supporting organizations on campus.

Email ThisBlogThis!Share to TwitterShare to FacebookShare to Pinterest
Labels: Hamas

How Did We Get to This Place?


Our presence here in the land goes back more than 3,000 years. We prayed for millennia, while separated from the land, to be able to return.  Once we did return, our people sacrificed in order to build and protect the land.
And now, insanely, the Jew who is passionate about our rights to the land and our attachment to the land is viewed as a “radical right winger,” a troublemaker.
Come again?
~~~~~~~~~~
The world certainly sees nationalist Jews this way:  If only these Jews would relent already, then Israel could reach an agreement with the Palestinian Arabs and there could be peace. But the fanatic and troublesome right-wingers keep getting in the way.
Far worse, there are Jews who think the same way.  A good percentage of those who don’t live in Israel certainly do.  Most painfully, and shamefully, there are Israeli Jews who have forgotten who they are.  (I will come back to this at some point, hopefully.)
~~~~~~~~~~
The reason that Jews who seek Jewish rights are seen as troublemakers is because the Arabs tend to negotiate via violence and threats. (You don’t give me what I want, this is what I’m going to do.)