Joel Fishman writes that UN Resolution 3379, claiming that Zionism is a form of racism, did not just appear out of nowhere. Though passed in 1975, the roots of the UN resolution equating Zionism with racism can be found in the UN in 1964. Back then, the UN Sub-Commission on the Prevention of Discrimination and the Protection of Minorities was engaged in discussions aimed at recognizing Antisemitism as a form of racism -- along with apartheid and Nazism.

At the time, the Jewish Telegraphic Agency had the story of what happened next:


Russia Asks U.N. to Condemn Zionism Along with Anti-semitism, Nazism

The Soviet Union called formally upon the United Nations today to condemn Zionism along with anti-Semitism, Nazism and neo-Nazism as a policy of “colonialism and race hatred.” The step was taken in the General Assembly’s Social, Humanitarian and Cultural Committee where a draft convention was being debated calling for the elimination of all forms of racial discrimination.

The following by Efraim Karsh is reposted here with the permission of The Middle East Forum:


As the only person to have won the Nobel Peace Prize on the basis of sheer hope rather than actual achievement, Barack Hussein Obama could be expected to do everything within his power to vindicate this unprecedented show of trust. Instead he has presided over a clueless foreign policy that has not only exacerbated ongoing regional conflicts but made the world a far more dangerous place. Nowhere has this phenomenon been more starkly demonstrated than in the Middle East where the Nobel laureate has abetted Tehran's drive for regional hegemony and brought the regime within a stone's throw of nuclear weapons; driven Iraq and Libya to the verge of disintegration; expedited the surge of Islamist terrorism; exacerbated the Syrian civil war and its attendant refugee problem; made the intractable Palestinian-Israeli conflict almost irresolvable; and plunged Washington's regional influence and prestige to unprecedented depths,[1] paving the road in grand style to Russia's resurgence.

J Street's activities extend from politics and advocacy -- to education:


J Street University is circulating a map that restores the Green Line and working to get it into synagogues, Hebrew schools, and summer camps. Good for them. Of course, fighting (nonviolently) over maps is preferable to shooting over the borders of the territories they represent, but there’s no substitute for a one-map solution.

Here is the map: 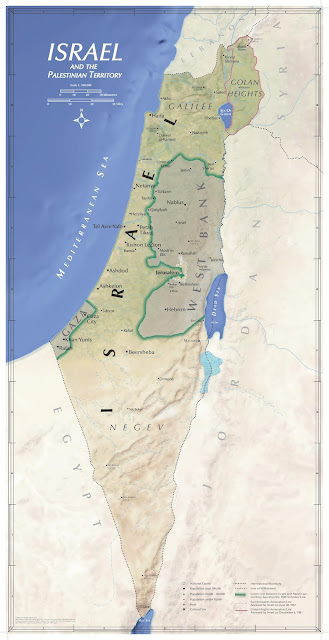 J Street has a lesson plan to go along with the map. I embedded a copy of the lesson plan at the end of the post.

The introduction in the lesson plan introduces what they see as the issue behind maps of Israel today:

Obama Was Right: Time For Israel To Put "Daylight" Between Itself and US -- To Preserve Credibility and Security

Last year, in the midst of the Iran negotiations that Israel so strenuously opposed, Kerry came out with the claim that not only was the Iran deal actually in Israel's interest, but that continued Israeli opposition to the Iran deal would further isolate her. But increasingly, the more pressing question is not so much whether Israeli  is really isolated from other countries, but rather whether the time has come for Israel to distance itself more from the United States.

Brett Stephens writes that Israel Looks Beyond America -- and is doing so very successfully:

Historically, Have Boycotts Ever Really Worked -- And What Does That Mean For BDS and Israel?

With all the talk of boycotts, especially talk of the BDS movement against Israel, it has been a given that boycotts work. So leave it to Freakonomics to ask the question: Do Boycotts Work?. The entire broadcast is embedded below at the end of this post, but there are some key points worth highlighting.

The podcast starts with the Montgomery Bus Boycott in response to the treatment of Rosa Parks, quoting a political scientist on the difficulty of tracing a causal connection between the boycott and the Supreme Court decision declaring bus segregation to be unconstitutional:

Antisemitism in Europe reaches a new low when a representative of the law can openly defend the right of someone to openly praise the death of Jews at the hands of the Nazis as a legitimate form of criticism of Israel.

Benjamin Weinthal writes Austrian prosecutor: Call to kill Jews is legal criticism of Israel, noting that a Turkish man posted on his Facebook page a quote falsely attributed to Hitler: "I could have annihilated all the Jews in the world, but I left some of them alive so you will know why I was killing them." -- this in the context of criticism against Israel’s war against Hamas last summer.

In 1958, Egyptians Laughed At Wearing the Hijab -- Today, Israel Has Sharia Courts

During a speech in 1958, Egyptian president Gamal Abdel Nasser entertained his audience with a story about a meeting he had with the leader of the Muslim Brotherhood 5 years earlier. He claimed the first request of the Muslim Brotherhood was to enforce the wearing of the hijab among women. Nasser's response to the leader had his audience roaring with laughter (English subtitles are in yellow at the top of the video).

Today, of course is a very different matter.

"After prophecy and righteousness there is no status Allah has exalted more than Shahada (Martyrdom)... ''And think not of those who have been killed in Allah's way as dead. Nay, they are alive (and) are provided sustenance from their Lord.'
...'The Shahid - his sins are forgiven with the first gush of his blood from his wound... The Shahid advocates on behalf of 70 members of his family, and saves them all from hell. The Shahid lives together with the prophets and the righteous ones.'"
[Official PA TV, Nov. 8, 2013]

Yesterday, in light of the possibility of punitive action against 3 Arab MK's who visited parents of Palestinian Terrorists, I posted about the question Are These Israeli Arab MK's No Less Deserving of Expulsion Than If They Were Congressmen?

Today, a decision was reached by the Knesset Ethics Committee to take action as Knesset Suspends Arab MKs for Meeting Palestinian Terrorists’ Families. Of the 3 members of the Balad Party, Hanin Zoabi and Basel Ghattas were suspended for 4 months and Jamal Zahalka for 2 months. While they are banned from participating in Knesset committee meetings and plenum discussions, they will be allowed to vote in them.

Are These Israeli Arab MK's No Less Deserving of Expulsion Than If They Were Congressmen?

There was an uproar when it was reported that members of the Balad Party visited the parents of 10 Palestinian terrorists who had attacked Israelis.

The three MKs who made the visit were Jamal Zahalka, Haneen Zoabi and Bassel Ghattas, and among the parents they met was the the father of Baha Alian, who, along with an accomplice, stabbed and shot to death three people on a bus last October.The MK's rebuffed Netanyahu's criticism of their visit by claiming that their goal was a humanitarian one -- to push for the return of the bodies of the terrorists to their families.

Interview With Shulamit Lando, and First Chapter of Her New Book: Hope Beyond Illness -- A Guide To Living Well With A Chronic Condition

Shulamit Lando has overcome Multiple Sclerosis and, through her success, has learned how to help others:


32 years after the original diagnosis, (and the traumatic aftermath of both, the actual diagnosis and the symptoms of the devastating illness) I have no symptoms whatsoever and I am totally functional. Since then I wanted to learn how to help others with challenging situations.

I became passionate about helping people in distress, those who felt lost and “paralyzed” in their lives. I help them learn how to overcome any challenge through understanding our essence and purpose, our drives, needs and emotions; and essentially, not giving up! Together we learn to trust that doing the best you can is always good enough.

By using the different tools that I have learned in my own journey towards recovery and growth, I am able to inspire, assist, guide and cheer people to achieve whatever they want in their lives.