The Court of Cassation approved a decision taken by the Amman Court of Appeal not to extradite Jordanian citizen Ahlam Tamimi, to the US authorities.

A judicial source told Jordan News Agency, Petra that Kingdom and the United States singed [sic] an extradition treaty on March 28, 1995, but was not approved by the Jordanian parliament.


The source said that a request sent by a foreign country to concerned authorities in Jordan to extradite criminals, are not usually accepted as long as the extradition treaty is not effective.

Al Tamimi was accused of conspiring to use a weapon of mass destruction against a U.S national. (emphasis added)

The problem is that this is not true.

The extradition treaty between the US and Jordan may or may not have been approved by the Parliament, but it was signed by King Hussein.

More importantly, in 1995 Jordan did recognize the treaty. The New York Times reports that the same treaty the Jordanian court is now saying is null, was in fact used to allow US agents onto Jordanian soil and extradite a terrorist, a Jordanian national, to the US for the World Trade Center bombing.


At 1 A.M. on Feb. 9, 1993, Federal prosecutors say, Eyad Ismoil, a Palestinian immigrant working in a grocery store in Dallas, received an urgent phone call from a boyhood friend.

A few hours later, Mr. Ismoil bought a plane ticket, and on Feb. 21, he flew to New York to join the friend, Ramzi Ahmed Yousef -- the man prosecutors call the mastermind of the World Trade Center bombing. Five days later, prosecutors say, with Mr. Yousef in the passenger seat, Mr. Ismoil drove a van packed with explosives into the garage below the Trade Center.

...Using airline records, the F.B.I. discovered that Mr. Ismoil had flown to Jordan on the night of the bombing. With the help of the local police, agents tracked him to his home in a refugee camp near Jerash, about 30 miles north of Amman.

Although the F.B.I. knew his whereabouts last winter, the Americans could not arrest him until King Hussein of Jordan signed a new extradition treaty with the United States last week.

...At 2:15 P.M. yesterday, Mr. Ismoil, wearing a bright orange prison suit, was led in handcuffs into Federal District Court in lower Manhattan. The 24-year-old suspect was arraigned in five minutes before Judge Kevin Thomas Duffy on bombing and conspiracy charges. He pleaded not guilty.


While The New York Times refers to him as a Palestinian immigrant, Ismoil's family originated in Nablus, then moved to Kuwait, where he was born. The family then resettled in Jordan in 1990 after the Iraqi invasion. Ismoil is a Jordanian national.

On the one hand, if the extradition treaty was in effect in 1995 to bring terrorist Ayed Ismoil to justice, why can't it be used now to extradite the terrorist Tamimi?

On the other hand, if the extradition treaty was not in effect in 1995 because it was not approved by the Parliament, then why were the Jordanians able to hand Ismoil over?

In his book Relentless Pursuit: The DSS and the Manhunt for the Al-Qaeda Terrorists, Samuel M. Katz writes about how Eyad Ismoil, who drove the explosives to the World Trade Center garage, was tracked down -- and extradicted to the US by Jordan.

Amazon describes Katz as an internationally recognized expert on Middle East security issues, international terrorism, military special operations and counterterrorism who has written books and articles and has served as a commentator on television networks.

On page the bottom of page 219 of his book, Katz describes the problem of extradition and how a treaty was drawn up and signed by King Hussein. There is no mention of the Jordanian Parliament being needed to approve in order for the treaty to be valid. 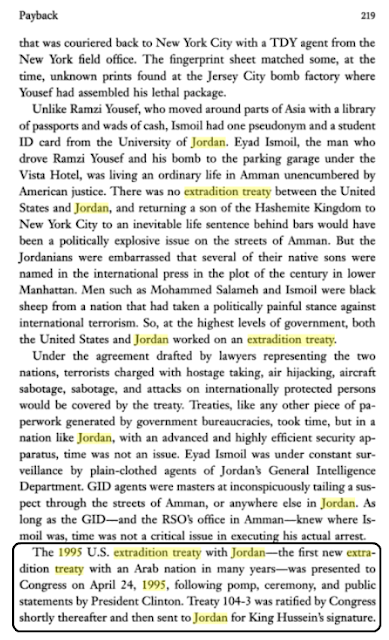 While there is no mention of the Jordanian Parliament approving the treaty, what is mentioned on the next page is that the treaty was signed into law in a ceremony in Amman a few months later. Furthermore, as the bottom of page 220 makes clear, not only was Ismoil extradited -- he was handed over to US agents on Jordanian soil. 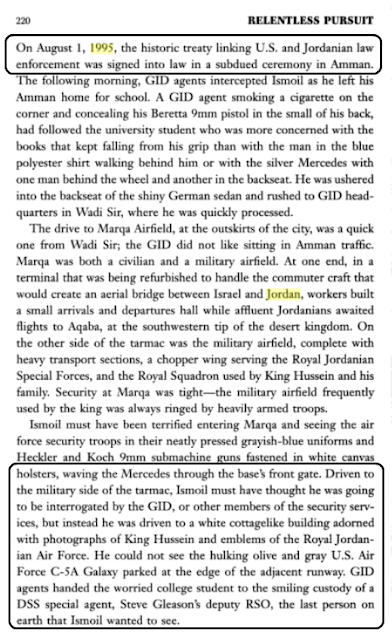 Considering the sensitivity of the Jordanian government to non-Muslim outsiders, the treaty surely must have been valid in order to allow agents of a foreign country to enter Jordan and remove the suspect.

So what happened since then that makes the exptradition now impossible? In the third paragraph on page 221, Katz talks about the blowback from the first ever extradition from Jordan: 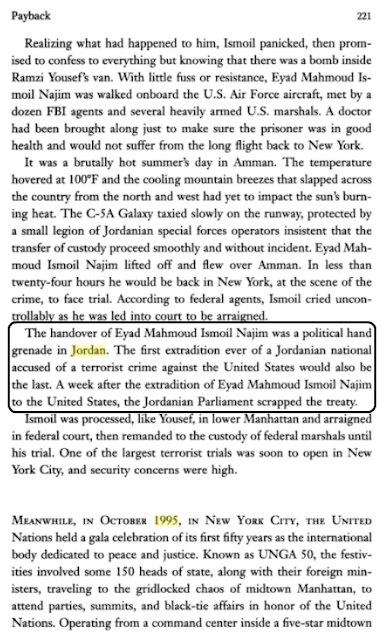 It is clear that the treaty was valid in 1995. The only question is what Katz meant by the Parliament "scrapping" the treaty -- did it actually repeal it, or did it choose to do something less formal, like just ignoring it.

The fact remains that if the only reason that the extradition treaty is not effective now is because the Jordanian Parliament decided to "scrap" it, then the Jordanian king, parliament and courts need to stop playing games and tell the truth about why it is refusing to hand an admitted terrorist over to the US.

Even better, Jordan could right this wrong by signing a new extradition treaty with the US so that terrorist Ahlam Tamimi can be brought to justice.

Jordan cannot be allowed to ignore justice as it has been able to do time after time in the past with other countries:


Just last year, Jordan turned down a French request that it extradite 2 terrorist suspects in the 1982 murder of six people in a Jewish restaurant in Paris. Two terrorists entered the Chez Jo Goldenberg restaurant in a predominantly Jewish neighborhood in Paris and murdered 6 people, while wounding 22 others.

The Jordanian government rejected extradition in that case because of a technicality. It turned out that one of the murderers, 62-year-old Zuhair Mohamad al-Abassi, a Palestinian, was arrested while he was in Jordan in 2015, before the extradition treaty between Jordan and France became valid. The other suspect, 54-year-old Nizar Tawfiq Hamada, never went to trial because the statute of limitation expired.


An anonymous source told AFP a different reason why Jordan would not extradite the suspected terrorist:


Jordan does not usually extradite its citizens to other countries, even in the case of an extradition agreement. In such a case, they are generally tried in specialized Jordanian courts.


Back in 1999, a Jordanian military court sentenced a radical Muslim preacher to death in absentia. Abu Qatada was suspected of being a key al-Qaida operative tried for conspiracy to carry out terror attacks, including a plot on the country’s American school in Amman. The sentence was immediately commuted to life in jail with hard labor. The following year, he was sentenced, also in absentia, to 15 years for plotting terrorist attacks on Israeli and American tourists and Western diplomats during Jordan's millennium celebrations.

But that was only the beginning.


Abu Qatada, accused of being bin Laden's right hand man in Europe, was in London. In 1993 he entered England on a forged passport and in 1994 he was granted asylum. In 2001, Jordan requested that Great Britain extradite Abu Qatada. But then it was the British and European courts that refused the request -- based on human rights concerns over Jordan's use of torture. In the meantime, Abu Qatada had been arrested more than once.

Finally, in 2013, Great Britain and Jordan signed an extradition treaty and Abu Qatada was sent to Jordan, with a guarantee that he would not be tortured. Apparently the fact that he had been arrested prior to the signing of the treaty was not an issue to Jordan, unlike in the extradition treaty it had with France.

As a postscript, upon his return to Jordan Abu Qatada was retried -- and cleared of all charges. Evidence used in the trials when he was tried in absentia while he was in Great Britain was ruled inadmissible in accordance with the agreement with Great Britain, because of the possibility it was obtained under torture.

At the time of the deportation, Jordanian Information Minister Mohammed Momani said the kingdom “is keen on credibility and transparency” in handling Abu Qatada, and that the deportation of the Palestinian-born Jordanian cleric “sends a message to all fugitives that they will face justice in Jordan.”

If it's any consolation to France, Jordan is no better at extraditing terrorists when the request comes from other Arab countries.

Iraq: Jordan Does Not Play Favorites


Iraq has been requesting the extradition of Raghad Hussein, the daughter of Saddam Hussein. Known as "little Saddam," she has been a vocal supporter of Isis, accused of funding Iraqi militants and in 2010 Interpol posted an arrest warrant for her in connection with her alleged direct involvement in Iraqi terrorism.

Iraq's repeated requests that Raghad Hussein be returned to Iraq have been turned down.

Nor is Jordan's refusal to deport Tamimi the first time that it has denied a US request.


Mohammad Abequa murdered his wife in New Jersey in 1994 and fled to Jordan -- along with their two young children. Once in Jordan, he was sentenced to 15 years by a court, but then pardoned after only 5 years in prison and set free. At the time, the US had no extradition treaty with Jordan. Even after personal pleas to King Hussein by President Clinton, Attorney General Janet Reno and New Jersey's US representatives and senators, Jordan refused to return Abequa for trial.

At the trial, he faced the possibility of death by hanging, but was sentenced to 15 years instead because of his testimony that the murder was an honor killing. Abequa, whose brother was a general in the Jordanian army, claimed he killed his wife to protect his honor, which under Jordanian law is a reason for a reduced sentence. He told the courtroom he lost his temper when his wife told him the man he saw leaving her house was her boyfriend and she showed him a new tattoo on her thigh that he had given her. Jordanian law allows leniency in the case of 'honor killing' cases when the man kills his wife or sister because he suspects her of adultery or premarital sex.

Jordan Will Deport Terrorists - When It's In Their Own Interests


Actually, Jordan does not always refuse to deport known terrorists out of the country -- even when they are nationals. In 1999, Jordan exiled 4 senior members of Hamas. Khaled Mashal, now a leader of Hamas, as well as Ibrahim Ghosheh, Izzat Rushuq and Sami Khater, were released from prison and flown to Qatar. All of them had Jordanian nationality. They were accused of inciting hardline Islamist sentiment in Jordan, and the government claimed the four left willingly as part of a deal with Qatar.


Also, there is also an unverified report that security agencies in Jordan at one point planned to deport 7 Libyans back to Libya. They were married to Jordanian citizens, who were legal residents of Jordan.

It's easy to forget that Jordan, for all of its supposed modernity, is really not that much different from the surrounding Arab countries. Its views on justice are not much more advanced than its views on honor killing. Even an extradition treaty is no guarantee that justice will be done, when it comes to Jordanian nationals. Supposedly in such cases, nationals can be judged in specialized Jordanian courts. However, based on Jordan's past record -- that is no comfort to the relatives of the victims of Islamist terrorism.

For now, the focus is on bringing the terrorist Ahlan Tamimi to justice.

it below. Thanks!
Technorati Tag: Israel and Ahlam Tamimi and Jordan and extradition treaty and sbarro.