What Does "The Jewish Vote" Even Mean -- And Is There Enough Of It To Go Around?

This past election, once again the perpetual question that inevitably came up was about 'the Jewish vote': which candidate won it -- and why does it even matter? The Democrats consistently brag that they own the Jewish vote, while the Republicans just keep on claiming that they are just on the verge of acquiring it.
This bipartisan fight over the Jewish vote can be traced back to Herbert Hoover.
In their 2012 book "Herbert Hoover and The Jews," Rafael Medoff and Sonja Wentling, propose that the Jewish vote became a thing in the leadup to the 1944 presidential election, when Roosevelt ran for his 4th term, against Thomas Dewey.
Read more »
Posted by Daled Amos at 1:05 PM No comments:

One element that caused this friction is the way social interaction between Jews and Blacks was structured in the 1960's.

According to the book "Israel in the Black American Perspective" (1985):


In the Black community Jews were frequently associated with wealth and "parasitism." Under the least propitious circumstances, Blacks usually met Jews as storekeepers and landlords--the most visible representatives of an oppressive economic system. Such meetings were not likely to promote good will and mutual respect. [p4]

But if Jewish storekeepers and landlords are such a significant reason for how Blacks viewed Jews, why would that hatred seem to be so focused on Jews?
Read more »
Posted by Daled Amos at 9:53 AM No comments:

Nixon, Rabin and Trump: Unfinished Business In The Middle East

What is the hardest part of brokering a peace agreement?
-- Sometimes, it's just getting the two sides to sit down in the same room.
-- Other times, the problem is getting the two sides just to talk.
-- Even then, there is the problem of getting them to negotiate and be willing to make concessions.
And then there is the problem when you just run out of time.
Following the Yom Kippur War, in which Egypt and Syria were nearly victorious, a unique possibility for peace between Israel and Egypt presented itself. Nixon's airlift of crucial arms during the war was critical to Israel's victory -- and created an opportunity.

Seeking to take advantage of this opportunity, in June 1974, Nixon became the first US president to visit Israel while in office.
As Rabin explained in a press conference after Nixon returned to the US:

"Ever since the airlift of the Yom Kippur War, the Arabs have come to understand that America will not allow Israel to be weakened. A defeat of Israel is a victory for the USSR. Paradoxically, this is what has raised America's prestige in the Arab world, and has given Washington leverage. Today in the Middle East, Moscow is a synonym for instability and war, Washington for stability and negotiation." (Yehuda Avner, The Prime Ministers, p. 270)

This leverage as an honest broker would make it possible for the US to go beyond being a supporter of Israel's interests, and show that it was a strong and reliable ally to address the interests of the Arab world as well.
Meanwhile, Nixon began discussing with Egypt's Sadat the possibility of a final settlement, going step-by-step. On June 25, Nixon wrote to Sadat:

Mr. President, I am convinced that we have witnessed in recent months a turning point in the history of the Middle East -- a turning toward an honorable, just, and endurinable peace -- and have ushered in a new era in U.S.-Arab relations. A direction has been set, and it is my firm intention to stay on the course we have chartered. (p. 271)

Two months later, Nixon resigned.
The following month, Rabin was meeting with President Ford -- and Kissinger -- to continue what Nixon had started. The following year, in March, Kissinger came to the Middle East to conduct his "shuttle diplomacy," bouncing back and forth between Israel and Egypt. Kissinger pressured Rabin on a withdrawal from the Sinai, especially from the Mitla and Gidi passes, while Rabin wanted Sadat to commit himself to a "termination of the state of belligerency" with Israel.
Kissinger's efforts failed -- and he blamed Israel.
In the end, however, another attempt was made, culminating in an interim agreement known as Sinai II.
Just to get an idea of what Rabin was up against, here is an excerpt from the notes of a conversation between Sadat and Foreign Minister Fahmi with Ford and Kissinger. The context is the early warning stations in the Sinai that Rabin wanted to retain -- and Sadat's idea of a compromise, where they would be manned by US troops. Note the highlighted portions. 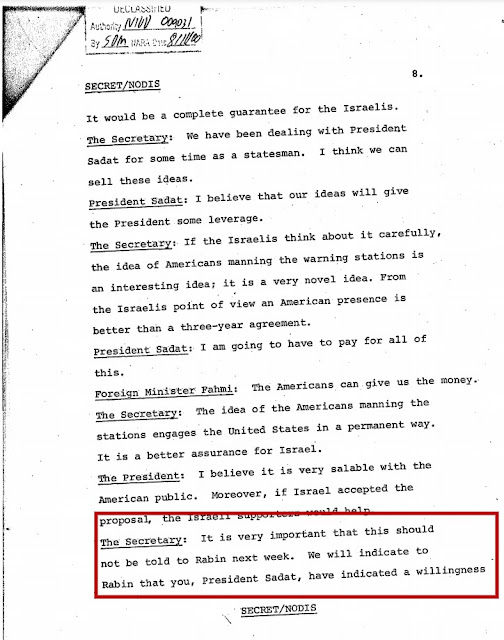 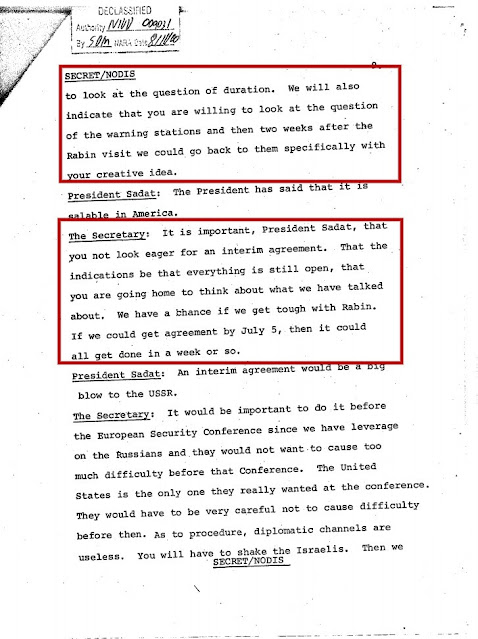 The term "honest broker" is overrated.
In any event, Rabin too ended up resigning because of the 'scandal' surrounding his wife, who had retained a bank account from the years when Rabin was Israel's ambassador to the US from 1968 to 1973. After that, the Israeli law forbidding citizens from holding bank accounts abroad came into play. However, another law prevented Rabin from resigning outright once the date for the next elections has been set. Instead, Rabin withdrew from the race as leader of the Labor Party, to be replaced from Shimon Peres to face Menachem Begin.
Begin became prime minister -- and it was during his term that a peace treaty with Egypt was signed.
Rabin felt his role in making that peace treaty possible was never acknowledged, but at the same time he understood that was the way of things.
In his memoirs, Rabin wrote:

When President Sadat made his historic visit to Jerusalem on 19 November 1977 I was no longer prime minister. Yet that visit -- and the subsequent moves toward achieving a peace treaty -- could never have come about were it not for the course my government adopted in signing the 1975 interim agreement. That our policy provoked the anger of Likud has not prevented Mr. Begin's government from reaping the fruits of our labors. Of course, that is how things should be, since the quest for peace is not a contest between political parties...The 1975 agreement with Egypt was never meant to be an end in itself. As its title implies, it was designed to advance the momentum toward peace, and in that sense it achieved its purpose. [emphasis added] (quoted in The Prime Ministers, p.302)

Begin benefited from the foundation set by Nixon and the groundwork laid by Rabin, both of whom left their work unfinished.
But that was not the last we heard from Rabin.
After serving as prime minister from 1974 to 1977, Rabin became prime minister again in 1992.
And he was still focused on peace. In 1994, he received the Nobel Peace Prize for his part in the Oslo Accords, along with Shimon Peres and Arafat. Rabin also signed a peace treaty with Jordan that same year.
In late 1995, Rabin described to Yehuda Avner his view of the Middle East, a description that 25 years later sounds familiar:

Number one: Israel is surrounded by two concentric circles. The inner circle is comprised of our immediate neighbors—Egypt, Jordan, Syria, and Lebanon, and, by extension, Saudi Arabia. The outer circle comprises their neighbors—Afghanistan, Iran, Iraq, Sudan, Yemen and Libya. Virtually all of them are rogue states, and some are going nuclear.

Iran is the banker, pouring millions into the West Bank and Gaza in the form of social welfare and health and education programs, so that it can win the hearts of the population and feed religious fanaticism.

Thus, a confluence of interest has arisen between Israel and the inner circle, whose long-term strategic interest is the same as ours: to lessen the destabilizing consequences from the outer circle. At the end of the day, the inner circle recognizes they have less to fear from Israel than from their Muslim neighbors, not least from radicalized Islamic powers going nuclear.

Number three: the Arab-Israeli conflict was always considered to be a political one: a conflict between Arabs and Israelis. The fundamentalists are doing their level best to turn it into a religious conflict—Muslim against Jew, Islam against Judaism. And while a political conflict is possible to solve through negotiation and compromise, there are no solutions to a theological conflict. Then it is jihad—religious war: their God against our God. Were they to win, our conflict would go from war to war, and from stalemate to stalemate. [emphasis added] (p. 707)

The context for this description of the Middle East is Rabin's response to Avner's question as to why he shook Arafat's hand at the signing of the Oslo Accords:

He and his PLO represent the last vestige of secular Palestinian nationalism. We have nobody else to deal with. It is either the PLO or nothing. It is a long shot for a possible settlement, or the certainty of no settlement at all at a time when the radicals are going nuclear.

With the growing threat of Islamic fundamentalism, negotiating with secular Palestinian Arabs made sense to Rabin.
Neither he -- nor then-President Clinton -- saw the potential in negotiating and working with other Arab states within those concentric circles. There's no reason they would, when all the contemporary thinking was focused on the Palestinian Arabs as a key to peace, a cold peace in line with the peace treaties signed with Egypt and Jordan with no thought of normalization. According to that thinking, it is either the Palestinian Arabs or nothing.
The Middle East achievements of the Trump administration this year took Rabin's outline and acted on it.
What Rabin might have further accomplished, we will never know.
He was stopped again, this time by a bullet, from pursuing peace.
But like Nixon and Rabin, Trump too will not be pursuing his vision for peace to its full extent.

Posted by Daled Amos at 2:59 AM No comments:

Some Black Leaders Supported Zionism Before Herzl Did

During the 1973 Yom Kippur War, a reporter asked Golda Meir about African leaders that were cutting off diplomatic ties with Israel under Arab pressure. The reporter claimed this proved that Israel's African policy and the aid given was a waste of time. Golda Meir disagreed:


Because what I did for Africa was not just a policy of enlightened self-interest. I did it for the benefit of the African peoples, and deep in their hearts they know this to be true. It was an expression of my deepest historic instincts as a Jew, and a demonstration of my most profound and cherished values as a Labor Zionist. [The Prime Ministers, by Yehuda Avner, p. 236]

Golda Meir was not the first Zionist to speak about helping Africa.

Herzl's novel, Altneuland, describes his vision of what Jewish Palestine would look like. At one point, one of the characters declares:


There is still one problem of racial misfortune unsolved. The depths of that problem, in all their horror, only a Jew can fathom. I mean the negro problem. Don't laugh, Mr. Kingscourt. Think of the hair-raising horrors of the slave trade. Human beings, because their skins are black, are stolen, carried off, and sold. Their descendants grow up in alien surroundings despised and hated because their skin is differently pigmented. I am not ashamed to say, though I be thought ridiculous, now that I have lived to see the restoration of the Jews, I should like to pave the way for the restoration of the Negroes. [Translated from the German by Dr. D. S. Blondheim, Federation of American Zionists, 1916, available online]

Herzl's desire for Blacks to be restored to their homeland was mutual.

In fact, Black support for the Jewish State predates Herzl.
Read more »
Posted by Daled Amos at 7:11 PM No comments: