Mr. Oliphant, Don't You Think The Snake Head Is A Bit Over The Top? (Updated)

Ed Morrissey and Gothamist are among those who have been covering Oliphant's cartoon.
My question: no one seems to mention that among the other disgusting imagery Oliphant uses, it seems that the body symbolizing Israel has a snake head.
Doesn't it? 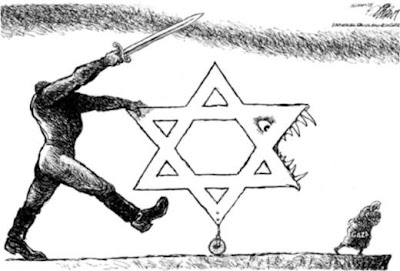 So what's that all about?

UPDATE: Here is an article by Barry Rubin that distinguishes between the misunderstanding and the outright hatred in the Oliphant cartoon.

THE CARTOON: THE PROBLEM IS POLITICAL MISUNDERSTANDING, NOT HATRED

It is silly to say that the Pat Oliphant Cartoon in the New York Times and many newspapers around the world is antisemitic. But it’s also a bad mistake because the cartoon deserves serious analysis to show just how dangerous and wrong it is, in ways that not only hurt Israel but all Western democracies.

You can see the cartoon at this URL or view it at the end of this article:

Let’s deconstruct the cartoon to show the basic ideas that underlie it and that make it lie.

This is, then, a loathsome cartoon. But to dismiss it by the single word “antisemitism” will foreclose thought as to why it is a loathsome cartoon. It will allow its defenders to avoid facing the real problems with this cartoon and the worldview it represents. And worst of all: that argument implies that the only problem was using the ambiguous Mogen David, that it would have been acceptable if he had just written the word “Israel” on the Nazi monster he created to represent the Jewish state.

Finally, this cartoon represents the mentality that will plague every Western and democratic state in the coming years. Imagine the exact same cartoon but with the Magen David replaced by the Stars and Stripes—the evil America attacking the Taliban or al-Qaida, or Iraq, or Muslims in general. Indeed, this is the kind of cartoon which has appeared aimed against America or the West in general. It is part of the merging of much Western fashionable intellectual and cultural thinking with that of extremist Third World, and especially radical Islamist, propaganda.

The cartoonist doesn’t hate Jews; he probably doesn’t even hate Israelis. What is involved here is a lack of understanding so enormous that it will both incite hatred; cause violence and death; and block policies needed to help people—including Palestinians who, are supposedly the object of its sympathy but thus doomed to suffer under a repressive regime with a permanent war policy.

Antisemitism? Ask not for whom the bell tolls because Israel, the canary in the mine—the one who first they came for—can tell you that you are all next.

Barry Rubin is director of the Global Research in International Affairs (GLORIA) Center and editor of the Middle East Review of International Affairs (MERIA) Journal. His latest books are The Israel-Arab Reader (seventh edition), with Walter Laqueur (Viking-Penguin); the paperback edition of The Truth About Syria (Palgrave-Macmillan); A Chronological History of Terrorism, with Judy Colp Rubin, (Sharpe); and The Long War for Freedom: The Arab Struggle for Democracy in the Middle East (Wiley). To read and subscribe to MERIA, GLORIA articles, or to order books, go to http://www.gloria-center.org

Get a life...heard of freedom of speech?

So if it's not anti-semitic, you agree with Barry Rubin that it is ignorance?