Just recently, we saw the following distortions by the media:

Legal Insurrection noted the original article by The Washington Post about the Glenn Beck rally: 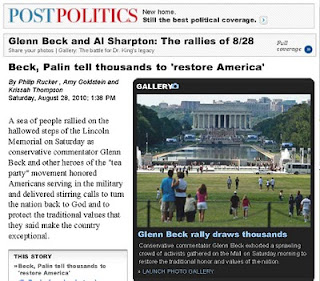 was just a little stingy with the truth-- 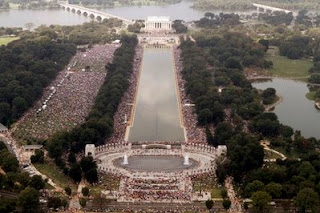 And similar doings are going on in the TV media. Newsbusters writes about the Glenn Beck rally, CBS to Black Beck Rally Attendees: ‘I'm Noticing that There Aren't a Lot of Minorities Here Today’

And Tel-Chai Nation writes about ABC News' troublemaking attempts at Ground Zero, where a reporter was reprimanded for trying to provoke a protester.

Actually, all of this is perfectly understandable. After all, considering the percentage of reporters that contribute to Obama and the Democratic Party, it's only natural that the media would act to protect its investments.


Senior executives, on-air personalities, producers, reporters, editors, writers and other self-identifying employees of ABC, CBS and NBC contributed more than $1 million to Democratic candidates and campaign committees in 2008, according to an analysis by The Examiner of data compiled by the Center for Responsive Politics.

The Democratic total of $1,020,816 was given by 1,160 employees of the three major broadcast television networks, with an average contribution of $880.

By contrast, only 193 of the employees contributed to Republican candidates and campaign committees, for a total of $142,863. The average Republican contribution was $744.

Apparently this came to light after it was suggested that since Rupert Murdoch’s News Corp. contributed $1 million to the Republican Governors Association, all Fox News reports on gubernatorial campaigns should contain a disclaimer.

I'm OK with that--as long all of the ABC, CBS and NBC TV reporters do the same right before they give their reports on the doings in Washington.