What The World Needs: An Arafat Museum 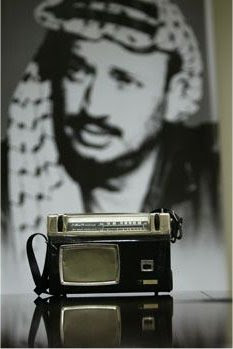 They are making an Arafat museum:


Yasser Arafat had a knack for turning ordinary objects into symbols, including the black-and-white checkered headdress that came to represent the Palestinian quest for a homeland.


Six years after his death, the keepers of Arafat’s memory are gathering thousands of objects — photographs, pistols, the trademark sunglasses and military-style suits he favored — for display in a museum under construction at his former West Bank headquarters, where Arafat spent the last three years of his life encircled by Israeli forces.

The Associated Press was given exclusive access to part of the collection, including the last kaffiyeh Arafat wore before being helicoptered out of his Ramallah compound two weeks before his death on Nov. 11, 2004. There was a transistor radio and a Muslim holy book, both said to have been left at a house where Arafat stayed during a secret foray into the West Bank during the 1967 Middle East war.

The AP article describes Arafat as "complex and divisive," mentioning in passing the word 'terrorist' as if it were a matter of opinion, glossing over the fact that Arafat ordered the murder of U.S. Ambassador to Sudan Cleo Noel Jr. and a foreign diplomat in 1973.

I suppose it is only fitting then that the Nobel prize that Arafat won is still in Gaza, and Hamas is not handing it over.

The museum is just one more example of how Abbas and the Palestinian Authority continue to incite hatred against Israel by paying homage to terrorists:

Actually, it is about honoring a terrorist and corrupt leader and it's about tell the Arabs got a better story.