The Lesson Of The Anti-Israel Seattle Bus Ads

It all started with ads about "Israeli War Crimes" going on buses in Seattle:

To the right of the image is a group of children -- one little boy stares out at the viewer, the others gawk at a demolished building, all rebar and crumbled concrete.

It's an ad you'll be seeing soon on a handful of Metro buses in downtown Seattle.

A group calling itself the Seattle Mideast Awareness Campaign has paid King County $1,794 so that 12 buses will carry that message around town, starting two days after Christmas. That's December 27: the two-year anniversary of Israeli attacks on Gaza, aimed at stopping rocket attacks and weapons smuggling.

Ed Mast, a Seattle man who is a spokesperson for the group, says it’s not meant to be an anti-Israel message, but a message designed to generate discussion and awareness.

That's right--all they want to do is to sit down and talk reasonably: about Israeli war crimes.
The fact is that this is not the start of a discussion; it is a campaign to demonize and delegitimize Israel.

One response was counter with our own ads.

Elder of Ziyon posted a number of possibilities: 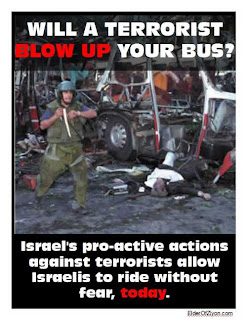 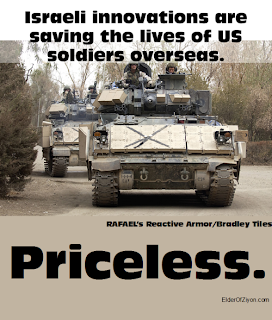 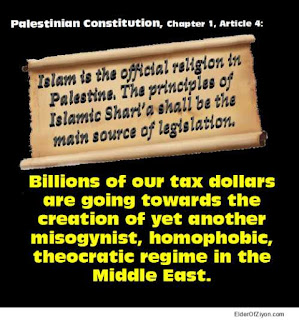 The David Horowitz Freedom Center started an ad campaign to run at the same time:

Stand With Us offered this (hat tip: ChallahHuAkbar ): 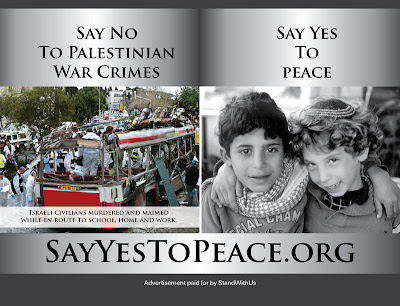 And Atlas Shrug's Pamela Geller was ready to run a campaign as well:

The end result?
It looks like we won this round:

“The escalation of this issue from one of 12 local bus placards to a widespread and often vitriolic international debate introduces new and significant security concerns that compel reassessment,” said Executive Constantine.

“My job is to deliver essential services to the people of King County, including transit service,” he added. “I have consulted with federal and local law enforcement authorities who have expressed concern, in the context of this international debate, that our public transportation system could be vulnerable to disruption.

“Metro sells advertising to raise revenues to provide transit service. Metro’s existing policy restricts advertising that can be reasonably foreseen to result in harm to, disruption of, or interference with the transportation system. Given the dramatic escalation of debate in the past few days over these proposed ads, and the submission of inflammatory response ads, there is now an unacceptable risk of harm to or disruption of service to our customers should these ads run.”

In light of the recent escalation of events, Metro Transit General Manager Kevin Desmond today asked his advertising consultant to notify the Seattle Mideast Awareness Campaign that Metro is rejecting its proposed ad, and for the consultant to notify the David Horowitz Freedom Center and the American Freedom Defense Initiative that Metro will not accept their proposed ads, as posing an unacceptable risk of harm to, disruption of, or interference with bus service, as defined under current policies.

In response to the Executive’s directive on Monday to review current policies, Desmond today also recommended an interim transit advertising policy that adds non-commercial ads to the list of current restrictions, with an exception for governmental entities that advance specific government purposes. Non-commercial ads that met the previous policy and for which contracts have already been signed are not affected, and ads already in place will remain.

“We cannot and would not favor one point of view over another, so the entire category of non-commercial advertising will be eliminated until a permanent policy can be completed that I can propose to the King County Council for adoption,” said the Executive. “Further work during the coming weeks will help determine what constitutionally-valid policy is best for the safety and well-being of the transit-riding public, our drivers and personnel, and the community at large.

“I thank everyone who has reached out to us to express their interests on this matter.”

Metro expects to complete work on a permanent transit advertising policy by the end of January, for the Executive to transmit to the County Council for adoption.

Talk is good, but under the circumstances no amount of talking was going to prevent this anti-Israel campaign.
Only when pro-Israel voices were ready to make themselves heard did we create a situation where either both sides would be heard on an equal footing--or the anti-Israel campaign would be stopped.

Either possibility was welcome.
This was never about shutting up the other side--it was about equal opportunity to exercise our own free speech.

But Ed Mast and his friends are playing the removal of the Seattle bus ads as a free speech issue:


He said his ads "weren't disrupting Metro. There was no evidence that they were gong to disrupt."

Rather, he said, "groups who wanted the ads silenced mounted a campaign to disrupt Metro. The disruptions were going to be from people who wanted the message silenced."

He said he was examining all options and is talking to legal advisers.

"It's a disturbing precedent that King County approved the ad in the first place and then gave in to public pressure on the content of the ad," he said.

Amin Odeh, with Voices of Palestine, which supports the bus ad, said, "We know how powerful and aggressive the bullying by right-wing Jewish groups and their special-interest friends can be ... . We're very disappointed that this is going to affect not just our campaign. It also takes away free speech from us and other peace and justice groups."

Ed Mast apparently sees contrary voices as 'disruptions' that are trying to silence him--odd talk from someone claiming to be interested in discussion.
Ed Mast better get used to the idea of opinions other than his own getting equal time.

You forgot the StandWithUs ad - http://i1186.photobucket.com/albums/z379/Charswu/BARTposter6Rob.jpg

Yeah, you won alright. Now everyone knows who is at the forefront of shutting down free speech in what used to be our democracy.

I'd say it is a pyrrhic victory.

It's not a free speech Anon any more than getting your friends together to slap up an ad in favor of flaming crosses and lynchings. I mean what is REALLY the downside to slavery, right?

Actually, the ad is right, in a perverse way. If American taxpayers are paying for war crimes, they aren't getting their money's worth since Israel commits so few.

A campaign like this can only make American debate its role in this conflict. A debate the 'Friends of Israel' in America clearly don't want to have.

The point of the counter-campaign is that there is more than one side to the issue--and not as black and white as the people behind the ad would have Americans believe.