Revisiting An Example Of Palestinian Fauxtography

This Fan Page DOES NOT belong to any Religion. We are not here to insult other Religion. The main aim of this PAGE is to spread the Truth about what is happening in Palestine to all the Human Beings.
Freedom Will Come To Palestine, from their Facebook page


If the goal were actually to tell the truth, then this group has obviously failed miserably.

This particular fraud was already uncovered back in June, but it bears repeating: 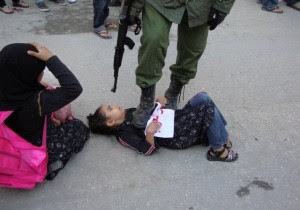 The Baltimore Jewish Times has a new article on "Freedom Will Come To Palestine"'s faked photo:


It’s not easy to fight hypocrisy and fraud anywhere, much less the Middle Eastern variety.

Several months ago, a Facebook group called “Freedom Will Come to Palestine” published a photograph that appeared to depict an Israeli soldier with his foot on the body of a prone Palestinian girl, a rifle aimed at her head. Readers were urged to “share this photo and let the world see what is really happening.”

Although scarcely covered by the international media, the picture predictably provoked a storm of Internet reaction, mostly vituperative responses condemning Israel. Among the milder ones: “I hope the Israelis rot in hell!”

A small Israeli news organization called Tazpit noted that the rifle was a Kalashnikov AK47 assault rifle — not the standard issue M16 and M4 of the Israel Defense Forces. Careful scrutiny disclosed that the soldier’s outfit was not an authentic IDF uniform. In short, the photo was a fraud of the kind often perpetrated by the Palestinians — not unlike the infamous al-Dura hoax (the staged “killing” of a young Arab boy caught in “Israeli crossfire” provocatively telecast around the world).

Check out Tazpit on the faked photo:


The soldier in the photo appears to be holding a Kalashnikov AK47 which is not used by the Israeli army, but used often by the Palestinian police forces and terror organizations. The IDF is known for using M16 and M4 weapons, and its uniforms are different from the soldier's uniform that appears on the photo.

The Israeli Governmental Advertising Agency told "Tazpit" earlier today: "the photo has been checked by the IDF Spokesperson and after investigating, it seems that the photo is not authentic and that the soldier is not Israeli. Unfortunately, the use of such photos is a known method, trying to harm Israel's image on the internet and is part of the social networks war of information".

The "Freedom Will Come To Palestine" site advised:


Share this photo and let the world see what is really happening in Palestine.

Yes, what is happening there is an awful lot of fabrication--but if you listen to Abbas, you already knew that.