On the question of "Why Did Jewish Communities Take to Chinese Food?" no less that the Smithsonian blog informs us:


The custom of Jewish families dining out at Chinese restaurants, especially on Christmas Day, has long been a joking matter. “According to the Jewish calendar, the year is 5749,” one quip goes. “According to the Chinese calendar, the year is 4687. That means for 1,062 years, the Jews went without Chinese food.” Even Supreme Court Justice Elena Kagan made light of the tradition during her Senate Judiciary Committee hearings. Granted, Chinese restaurants are typically among the few businesses open on December 25th, but it turns out that there are historical and sociological reasons why these two cultures have paired so well

Be that as it may, some have gone so far as to point to this picture appearing this year in the window of a Chinese restaurant, as an illustration that the feeling is mutual: 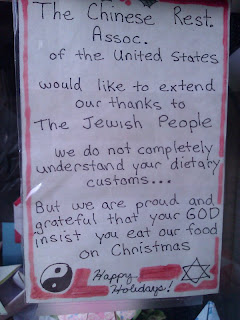 That picture is a copy of a drawing by director David Mamet that appeared a year ago on Tablet: 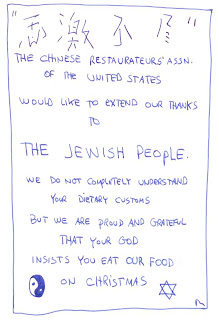 I guess it's the thought that counts.

Email ThisBlogThis!Share to TwitterShare to FacebookShare to Pinterest
Labels: Jews and Chinese Food

Hmmmm....wish the Chinese restaurants here were open on Christmas day, but unfortunately the whole town shuts down!