Has our government finally learned?  No matter what efforts we make, no matter the concessions – in the end it is Israel that faces accusations when things go wrong.  The lesson here is that we should stop trying and refrain from further concessions.
What I am referring to is the tone, as well as content, of testimony given by Kerry yesterday to the Senate Foreign Relations Committee.  Tovah Lazaroff, providing an analysis in the JPost, wrote:

“It wasn’t what Secretary of State John Kerry said...it was how he said it....

“It was a narrative exclamation, and pause, strong enough to be heard round the world.

Kerry’s accusation: that an announcement by Israel about building over the ‘67 line is what killed the chance to revive the “peace negotiations”

Read: Analysis: 'Poof, that was sort of the moment’
~~~~~~~~~~
Lazaroff describes the progression of events that Kerry presented.  I want to review it quickly here because Kerry’s misrepresentations require correction.   No one should take him at his word.

Israel - which had committed to the release of 106 pre-Oslo prisoners, in four stages, in order to get the PA to the table for nine months – announced towards the end of March that the final group of prisoners would not be released as scheduled because of evidence that this painful (and, many would say, horribly inappropriate) concession was not achieving its intended results.  The Palestinian Authority had stopped participating in direct negotiations – there was only separate contact by each party with US negotiators.  What is more, there was solid evidence that once Abbas secured the release of that last group of prisoners, he was intending to call a halt to “talks.”  He had been hanging in at a minimal level only to achieve the victory of the release of terrorists.
Israel said that the final group of prisoners would be released only if the PA committed to another nine months at the table after April 29th. A predictable furor followed, with the PA saying that it was entitled to the final prisoner release without having to make any further commitment.
At this point the US, seeking to salvage the process, intervened, and the news was full of talk about Pollard possibly being let out of prison (to “motivate” members of the Israeli government to agree to further concessions), and Israel agreeing both to the release of that final group of prisoners plus another 400 and, to boot, a partial freeze in construction in Judea and Samaria (NOT including Jerusalem and exempting building for which tenders were already out).  All so the PA would stay at the table for another nine months.
Enough to give a nationalist Zionist a heart attack, even with the tentative talk about Pollard’s release (a cruel manipulation).  But from the US perspective there should have been acknowledgement that Netanyahu was really trying.
~~~~~~~~~~
Before this grand new deal could be finalized, Abbas announced that he had signed applications for membership in 15 international organizations. This was precisely what he was not supposed to do, as long as there were negotiations. And this was the final blow.  Kerry cancelled plans to fly to Ramallah to finalize the expanded deal, the US announced that it was no longer considering the release of Pollard, and Israel said all offers were off the table.
At the time this happened, I was astounded, that Abbas could very likely have secured the release of some 420 prisoners, and yet opted to go a different route instead. To me it was obvious that he was tired of the negotiations charade and was prepared to move to the next step – one that was well planned and bound to come sooner or later.  Abbas blew it, willfully and defiantly.
~~~~~~~~~~
At the same time all of this was transpiring, an announcement was made by Israel regarding the construction of 700 new housing units in the Gilo neighborhood of Jerusalem.  The tenders for this construction had been put out prior to this.  It was not something new.
Kerry, however, has now chosen to point his finger at Israel, saying that this announcement about construction is what destroyed the possibility of salvaging the process.
This is how Lazaroff describes Kerry’s testimony (emphasis added):

“But while Kerry said the 15 applications were not helpful, he didn’t pause in that part of the narrative, nor did he state that this was the point of no return.

“He described matter-of-factly what happened after the March 29 release was delayed as both sides tried to conclude a deal to keep the talks going for another nine-months.

“’Unfortunately the prisoners weren’t released on Saturday, when they were suppose to be released,’ Kerry said.

“’And then in the afternoon, when they were about to maybe get there, 700 settlement units were announced in Jerusalem and, poof,’ Kerry said as he spread his arms wide and paused. It was a move that accentuated the drama.

“Kerry then finished his sentence: ‘That was sort of the moment,’ he said as he brought his hands down.’”

Poof?  Kerry has sunk to a new low, even for him.
~~~~~~~~~~
I want to make several points here:
First, Israel had not committed to freezing building under the terms of the current negotiations, nor is there anything in the Oslo Accords that would prohibit this.  Israel was in the process of offering a partial freeze when things fell apart, but had already clarified that the partial freeze would not include Jerusalem.
Gilo is over the ‘67 line, but it stands on what had been Jewishly owned property even prior to 1967. 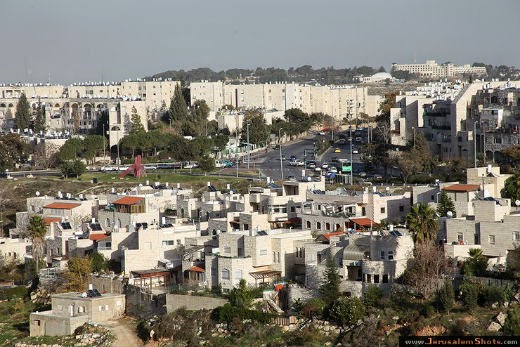 Credit: JerusalemShots
The Arabs refer to it as being in “East” Jerusalem, but in point of fact it is in Jerusalem’s south (or more accurately south west). 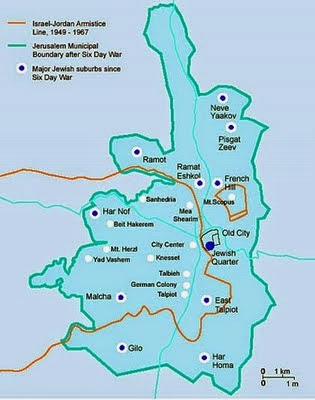 Credit: Crethiplethi
Sometimes Gilo is referred to as a “settlement” – which is what Kerry just did: it’s more dramatic than talking about a part of Jerusalem.  Gilo, however, is solidly within the municipal borders of Jerusalem.  It is a Jewish neighborhood with over 40,000 residents that no one believes would ever become part of a Palestinian state even if one were – Heaven forbid – to be established.
The furor over this is nothing but posturing.
~~~~~~~~~~
Jonathan Tobin, editor of Commentary, responded similarly to Kerry’s “poof” statement.  “Why did Kerry lie about Israeli blame?” he asks.   And then proceeds to answer the question (emphasis added):

“...to blame the collapse on the decision to build apartments in Gilo...is, to put it mildly, a mendacious effort to shift blame away from the side that seized the first pretext to flee talks onto the one that has made concessions in order to get the Palestinians to sit at the table. But why would Kerry utter such a blatant falsehood about the process he has championed?

“The answer is simple. Kerry doesn’t want to blame the Palestinians for walking out because to do so would be a tacit admission that his critics were right when they suggested last year that he was embarking on a fool’s errand...

“Since Kerry hopes to entice the Palestinians back to the talks at some point, blaming Israel also gives him leverage to demand more concessions from the Jewish state to bribe Abbas to negotiate. Being honest about the Palestinian stance would not only undermine the basis for the talks but also make it harder to justify the administration’s continued insistence on pressuring the Israelis rather than seek to force Abbas to alter his intransigent positions.

“Seen in that light, Kerry probably thinks no harm can come from blaming the Israelis who have always been the convenient whipping boys of the peace process no matter what the circumstances. But he’s wrong about that too. Just as the Clinton administration did inestimable damage to the credibility of the peace process and set the stage for another round of violence by whitewashing Yasir Arafat’s support for terrorism and incitement to hatred in the 1990s, so, too, do Kerry’s efforts to portray Abbas as the victim rather than the author of this fiasco undermine his efforts for peace.”

Read: Why Did Kerry Lie About Israeli Blame?
It is said sometimes that trying to make peace cannot hurt.  But we see that it can, when the effort is mismanaged.
Tobin’s assumption that Kerry hopes to entice the Palestinians back at some point is probably correct.  Until today I have avoided posting about the interminable haggling about the end of this process.  It has been unbearable to witness.
I do think it’s come to an end, for now, even though Kerry is still talking about what the next few days may bring.  Imagine, U.S. State Department spokeswoman Jen Psaki saying, "Gaps remain, but both sides are committed to narrow[ing] the gaps."
Prime Minister Netanyahu, for his part, has instructed ministers to cut off high-level contacts with the Palestinian Authority on non-security related issues (Tzipi Livni excepted).

~~~~~~~~~~
Some are speaking about scaling down expectations. Thus did Shlomo Avineri, a former director general of the Israeli foreign ministry say, “The gap between the most moderate position in Israel and the most moderate position in the Palestinian leadership is too [wide] right now. It's time for the U.S. to think of a contingency plan —treating this as a conflict-management situation."

Perhaps a short term compromise, of sorts. What I see, however, is that Israel is trapped by Oslo, as these accords call for negotiations to resolve final issues.  Thus will the process of negotiations come back to haunt us again and again, in various formulations, until there is the courage in the government to declare Oslo failed, and null and void because the PLO has abrogated its terms.
~~~~~~~~~~
© Arlene Kushner. This material is produced by Arlene Kushner, functioning as an independent journalist. Permission is granted for it to be reproduced only with proper attribution.