Judging J Street By The Candidates They Support


J Street, founded back in November 2007, made no secret of its agenda in its beginnings. In 2009, co-founder Jeremy Ben-Ami admitted to New York Times journalist James Traub:


Our No. 1 agenda item is to do whatever we can in Congress to act as the president’s blocking back.

So much for the importance of bi-partisan support for Israel.


Instead, when J Street claims it is "The Political Home for Pro-Israel, Pro-Peace Americans" -- it should admit that only Democrats need apply!

That page no longer exists.

Instead, these days there is a separate site, J Street Pac, which lists J Street Pac candidates. It lists the candidates according to name, state and office -- but unlike the obsolete page on the J Street site, this page does not list the party of the candidate.

So what kind of candidates is J Street going to support?
Since J Street claims to be pro-Israel, one would naturally suppose that J Street will make a point of supporting only those candidates whose pro-Israel bona fides are impeccable.

But then again, J Street's pro-Israel bona fides are themselves far from impeccable.

True, J Street claims to support Israel, that it is "pro-Israel, pro-peace".

But look at their record:
So if this is the kind of organization J Street is, we can expect that the candidates it supports reflect J Street's own anti-Israel animus.

Here is a recent example that proves the point.

On April 25, a letter signed by 3 Congressmen was sent to Ron Dermer, Israeli ambassador to the US to oversee the use of US tax dollars for humanitarian aid in Gaza: 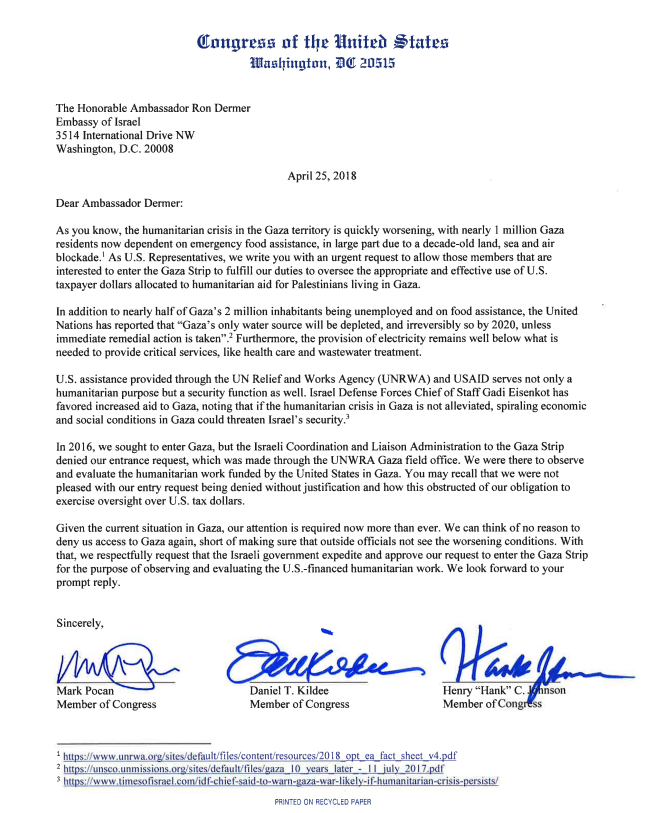 Among the points the letter claims:
The 3 Congressmen who signed the letter -- Pocan, Kildee and Johnson -- are supported by J Street. What else do we know about them?

The Washington Free Beacon reported that Representative Mark Pocan was identified as the member of Congress who last year anonymously reserved official Capitol Hill space for an anti-Israel forum organized by organizations that support boycotts. In the end, Pocan did not attend the anti-Israel forum he sponsored. A senior Congressional official was quoted as saying


[Pocan] chose to facilitate a pro-BDS smear campaign using taxpayer dollars without even showing his face at the event...As millions of Jews and non-Jews alike celebrate the 50th anniversary of the reunification of Jerusalem, Congressman Pocan and his J-Street lackeys are spending their time working to undermine the state of Israel.

Another of the 3 Congressmen, Representative Hank Johnson, referred to Israelis living in Judea and Samaria as...termites:


There has been a steady [stream], almost like termites can get into a residence and eat before you know that you’ve been eaten up and you fall in on yourself, there has been settlement activity that has marched forward with impunity and at an ever increasing rate to the point where it has become alarming.

Johnson's 2016 statement of "increasing" settlement activity is easily refuted by the facts. Keep in mind that Johnson is the one who claimed in 2010 that stationing 8,000 Marines on Guam would cause the island to "become so overly populated that it will tip over and capsize."


As for Congressman Kildee, he was one of 3 Congressman in 2016 who met with Shawan Jabarin, an Arab terrorist affiliated with the Popular Front for the Liberation of Palestine. Mark Pocan and Hank Johnson were among them. Such a meeting implies sloppy vetting - or worse.


When you compare the statements and actions of J Street with those of Senators Mark Pocan, Hank Johnson and Daniel Kildee they do seem to be a good fit -- they all undermine Israel.