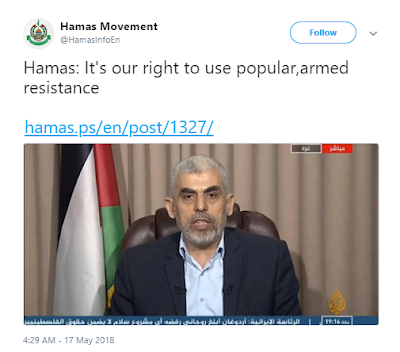 
In 1974, the UN General Assembly passed a resolution which:


3. Reaffirms the legitimacy of the peoples' struggle for liberation form colonial and foreign domination and alien subjugation by all available means, including armed struggle;

7. Strongly condemns all Governments which do not recognize the right to self-determination and independence of peoples under colonial and foreign domination and alien subjugation, notably the peoples of Africa and the Palestinian people;

The phrase "armed struggle" is repeatedly used in the 1968 Palestinian National Charter, a copy of which is conveniently carried on the UN website.

In 1978, the UN General Assembly went further. "Armed struggle" was not just one option included among others, but that it was a particular option to be used. Also, in 1978 the word "occupation" was used - a word that was not used at all in the 1974 resolution.


And if the Palestinian goal in that struggle was not clear, in 1980, Israel circulated a copy of the “political programme” of Fatah, which uses the term "armed struggle" and "armed revolution" -- with the specific goal of "the liquidation of the Zionist entity" mentioned 3 times.

The ambivalence the UN has with the whole idea of "armed struggle" is revealed in a UN press release in 2005 which noted the difficulty it was having with what qualified as terrorism and what would be exempted. Among the disagreements was "whether the exemption should also cover armed resistance groups involved in struggles against colonial domination and foreign occupation."

Last year, I wrote about how not only was this adoption of "armed struggle" antithetical to the UN Charter but that the idea of Jews - indigenous to the land and predating the Arab colonization by over a millennium - being colonial and alien is absurd.

But here is another angle.

In his book, The International Law of Belligerent Occupation,Yoram Dinstein writes:


There is a widespread conviction that the civilian population in an occupied territory has a right to forcibly resist the Occupying Power. This is a misconception that must be dispelled. In reality, LOIAC [Law of International Armed Conflict] allows civilians 'neither to violently resist occupation of their territory by the enemy, nor to try to liberate that territory by violent means'. As a Netherlands Special Court pronounced in the 1948 Christiansen trial:


the civilian population, if it considers itself justified in committing acts of resistance, must know that, in general, counter-measures within the limits set by international law may be taken against them with impunity. [emphasis added]

Dinstein did not make this up.

The italicized text above refers to "How Does Law Protect in War?", Volume 1: Outline of International Humanitarian Law, published by the International Red Cross:

From the point of view of IHL [International Humanitarian Law], civilians in occupied territories deserve and need particularly detailed protecting rules. Living on their own territory, they come into contact with the enemy independently of their will, merely because of the armed conflict in which the enemy obtains territorial control over the place where they live. The civilians have no obligation towards the occupying power other than the obligation inherent in their civilian status, i.e., not to participate in hostilities. Because of that obligation, IHL allows them neither to violently resist occupation of their territory by the enemy nor to try to liberate that territory by violent means. (Part 1, Chapter 8:IV) 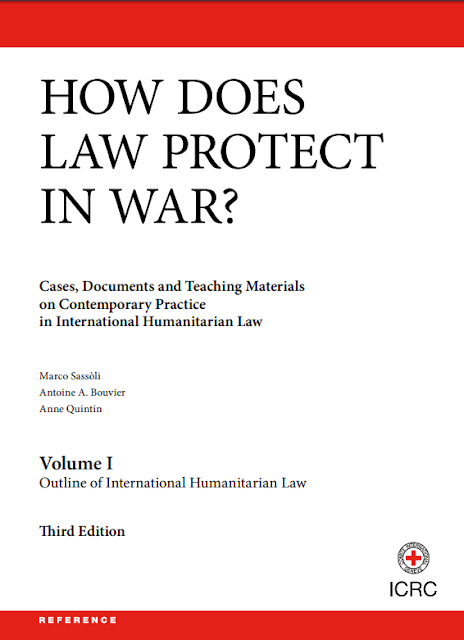 The rules that apply to an occupying power appear counter-intuitive, unless you take into account that international law is taking the long view, namely not to jeopardize a potential return to the status quo:


[The occupying power's] legitimate interest is to control the territory for the duration of the occupation, i.e., until the territory is liberated by the former sovereign or transferred to the sovereignty of the occupying power under a peace treaty. IHL is neutral on jus ad bellum issues [whether a war is just] and shows no preference for either solution, but international law tries to ensure that no measures are taken during the occupation which would compromise a return to the former sovereign. [emphasis added]


Even if one were to argue that Gaza and the West Bank were occupied, the fact is that in accordance with UN Resolution 242, Israel committed itself to return territories - though not all territory won in 1967 - in accordance with its security needs, and has done so.
There are legal grounds - based on precedent - for saying that Gaza, in fact, is not occupied.

Similarly, the existence of a Palestinian Arab government in control of the West Bank, as detailed in Oslo II Articles XVII-XXI supports the claim that it is not under occupation either.


As for Israel itself, the Hamas claim that Israel is occupied "Palestinian" land is refuted by the fact that Jews have lived on the land uninterruptedly for over 3,000 years. Far from being a foreign, alien or colonial power (a term far more fitting the Muslims who invaded in the 7th century), it was the foreign Arabs from outside then-Palestine who chose to attack and lost - creating the issues that persist today.


Besides the fact that the idea of "armed struggle" adopted by the UN does not imply random attacks on unarmed civilians, the Geneva Convention makes clear that "the laws, rights, and duties of war apply not only to armies, but also to militia and volunteer corps fulfilling the following conditions:


1. To be commanded by a person responsible for his subordinates;
2. To have a fixed distinctive emblem recognizable at a distance;
3. To carry arms openly; and
4. To conduct their operations in accordance with the laws and customs of war.


Endangering the lives of Gazans by using them as human shields while targeting unarmed Israeli civilians who are clearly not taking part in any hostilities is an obvious violation of international law, and proves the lie to Hamas claims of a right to "armed struggle" which clearly is nothing less than terrorism.


The fact the UN gives full-throated support to "armed struggle" but cannot see its way clear to delineate what is, and what is not, terrorism is an indictment of its corruption by undemocratic states and of how far it has drifted from the international law it claims to uphold.