On Monday, July 22, 1946, the Irgun set off an explosion that destroyed part of the King David Hotel used by the British military, killing 91 people and injuring 46.


An article in The New York Times in 1981 reported on a reunion of some of those involved in the attack. It gives background on what led to the attack, noting that the Haganah, the Irgun and Lehi all endorsed the plan:

They were provoked by a British Army action against Jewish leaders and settlements on June 29, 1946. On that ''Black Saturday'' about 25,000 troops smashed into homes and kibbutzim, arresting 2,500 Jews and confiscating weapons.

''One search party marched into the dining hall at Givat Brenner shouting 'Heil Hitler!' Mr. Clarke wrote. ''Another party scrawled red swastikas on the walls of the settlement's classrooms. While searching the Bank Hapoalim in Tel Aviv, a British officer shouted at one of the clerks, 'What you need is the gas chamber!'''

This 4-minute excerpt from the documentary "Pillar of Fire" gives more background, both on what led to the bombing of The King David Hotel and the conflicting stories on whether there was any warning given:

The attack and its severity have come to be accepted as proof that Menachem Begin and his followers were terrorists, no better than Palestinian terrorists. In 2006, historian Tom Segev went so far as to write:


The terror attack on the King David Hotel in Jerusalem was in its day the equivalent of the Twin Towers.

In his rebuttal of Segev, Yisrael Medad - an unofficial spokesperson for the Jewish communities in Judea and Samaria - notices a couple of significant differences:
Specifically:


There was a telephoned warning. It was received. Flash grenades and a petard were set off. Phone calls from within the hotel from a signals officer who witnessed the shooting of a British Major were made to three separate security stations. The British troops on the roof opened fire for a few minutes on the escaping Irgun soldiers. Nothing set off alarm bells but we do have testimonies that the Brits all thought it was a bluff. [emphasis added]

One of those testimonies comes from Adina Hay-Nissan, who at the time was a teenage girl with the job of calling in the warning. At the reunion, she recalled that she called up the British command that was stationed in the hotel and warned them, ''This is the Hebrew resistance uprising. We planted bombs in the hotel. Please vacate it immediately. See, we warned you.''

There is corroboration of this, delivered before the British Parliament on May 22, 1979, by Lord Greville Janner. At the time, Prime Minister Begin was visiting England and comments were being made about his responsibility for the King David Hotel attack. Lord Greville addressed Parliament about the issue:


As your Lordships know, I am against terrorism of any kind and for any purpose. But I think we must be fair. I was informed that on a radio interview Mr. Begin a few days ago explained the line that his friends took when he said that under no circumstances did they plan attacks on women, children or civilians.

I think the House is entitled to know some facts that I came across in the course of some professional inquiries I have been making in respect of what happened at the time of the King David Hotel incident. I came across them not very long ago; I am saying this with the consent both of the people who have been in touch with me and also of the doctor concerned. I want to wipe away the suggestion that no warning was given. I propose to read a letter from a Dr. Crawford in Bournemouth. I quote:


"It was very kind of you to phone me today and I sat down at once to write to you".

I met Dr. Crawford at another venture of Israel which is well known to many people—the Magem [sic] David, which is the Shield of David Ambulance and Health Services. I happened to meet him at a conference held in Bournemouth. Casually he told me that he knew something about this.

He says in his letter:


Further to our recent conversation in Bournemouth, I am writing to confirm that the officer"— he spoke about an officer whose name, I am sure, is known to those who were in Palestine— who wrote to me in 1946 concerning the King David Hotel 'incident' was Major-General Dudley Sheridan Skelton, CB, DSO, FRCS, formerly DGMS in India, Hon Physician to HM The King and to HE the Viceroy of India. He retired from the forces about 1937"— I think that it is of great importance that this attack should be properly and effectively met— when he was given the rank of Brigadier and was ADMS in the SE Command. It was in this area that I met him in the course of my duties as Assistant Medical Director of the Emergency Medical Services Hospital at Preston Hall Sanatorium, Maidstone, and I worked with him until my transfer to Bournemouth as Medical Superintendent of Douglas House Sanatorium in 1943, but we remained in contact with each other for some years. In 1946, he was head of a hospital in Palestine near Jerusalem and was a frequent visitor to the King David Hotel; apparently he was there on the very day of the explosion and he wrote me that 'a warning' was passed on to the officers in the bar in rather jocular terms, implying it was 'Jewish terrorist bluff'. But despite advice to 'ignore the bluff' he decided to leave and thus was out of the hotel when the explosion took place. I kept his letter for many years, but unfortunately, after the death of my wife in 1970 and my own severe illness in 1971, I sold my house and went into a flat and because of limited space I unwisely threw away a lot of my accumulated papers and correspondence, so the letter is no longer available; and Brigadier Skelton has long since died. I hope these facts will be of some help to you. Many of my friends knew this story at the time but few have survived; my sister-in-law will remember it clearly as she was friendly with the Brigadier and lived with us at the time. If you think it worth-while, I could contact her" [emphasis added]

— I did ask him to contact her and she wrote a letter confirming what Dr. Crawford said.

As your Lordships are well aware, I do not approve of terrorists of any kind. The Prime Minister of Israel explained a few days ago what happened and I hope that the letter I have read out now will, in all fairness, answer the accusation that has been made about this incident. I am very grateful for the attention the House has given me...

In his book "Palestine Investigated: The Criminal Investigation Department of the Palestine Police Force, 1920-1948," Eldad Harouvi writes that Chief Secretary John Shaw, who claims in the video above that there was no warning, was blamed by some for the casualties:


In his book, Harouvi reveals some interesting facts: First, the CID had intelligence showing the Hotel as a possible target for attack by the Irgun in December 1945 – 6 months prior to the attack. The CID asked to raise security in the hotel, including putting armed soldiers at the 'Regence' restaurant at the entrance of the hotel. The Chief Secretary refused to consider these suggestions, with the justification that there were not many places for recreation and fun in Palestine, and he did not want to foreclose another. He continued to refuse to take action (or even to pass on the information to the High Commissioner of Palestine) when the CID approached him again with newer information on the attack plan (the CID had the plan of attack, but did not know exactly when it would be carried out).

Second, another fact that is not common knowledge is that the Irgun carried out a diversion bombing minutes after the bombs were planted in the King David Hotel, in which a wagon with explosives was blown outside shops next to the hotel. The CID's assessment was that this second bombing (which broke windows, but did not hurt anyone) was intended to cause panic and encourage evacuation of the building. One of the CID officers Harouvi interviewed for his book flatly blames Shaw for the death of so many, since he could have evacuated the building on time (pages 293-297).

This photo, described by Wikimedia Commons as "the explosion of a second bomb at the King David Hotel in Jerusalem," could be a photo of the first bomb that served as the diversion.

There were claims that Shaw not only knew about the warning but deliberately refused to act on it. Nothing was ever proved. In 1948 both a newspaper and a book repeated the accusation -- and in both cases were forced to retract and apologized because of lack of proof. Begin repeated the accusation in his book "The Revolt," but Shaw did not sue him on the advice of lawyers that since Begin did not refer to him by name but instead to a "high official" there was not enough basis for a claim of personal defamation.

Here is a letter to The Jerusalem Post, indicating that warning was given, while also supporting Shaw's claim that there was never any warning. [Hat tip: Yisrael Medad]

Yet years later, neither the letter that Lord Janner read, back in 1979, nor the other facts about the advance warning and possible negligence by the British themselves have made a dent in the efforts of those who want to tar Menachem Begin as a terrorist on a par with the Palestinian terrorists who target unarmed men, women and children.

Note that The New York Times at the time also reported the warning [Hat tip: Charlie in NY; DG]. 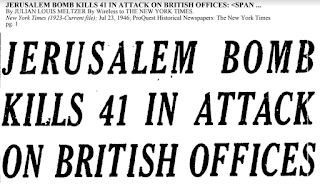 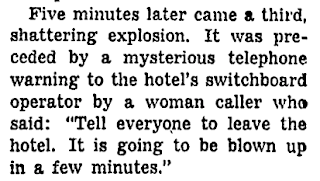 What appears to have once been established fact has long gone down the memory hole.