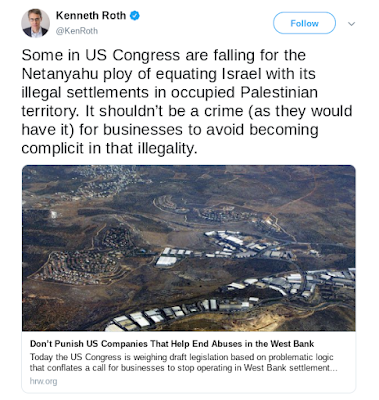 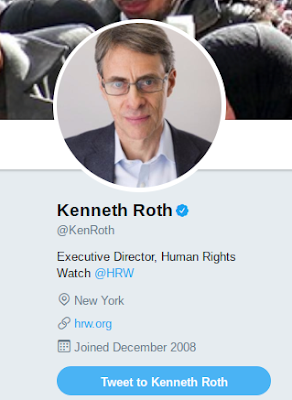 When Roth tweets, he is tweeting as the head of HRW, not as a private person -- and he does not even include the usual "retweets are not endorsements" disclaimer on his Twitter profile.

The halo effect that surrounds Human Rights Watch extends to Ken Roth, and he appears not to mind that.

But Ken Roth does seem to throw around that claim of illegality an awful lot.

When he Tweets about Airbnb 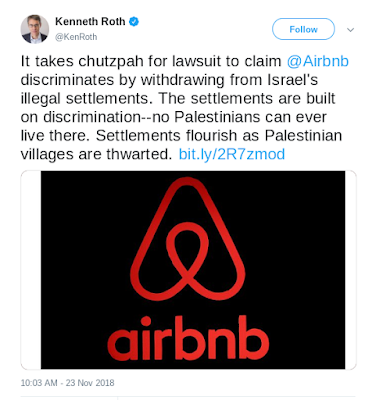 And when he writes about the Gaza riots: 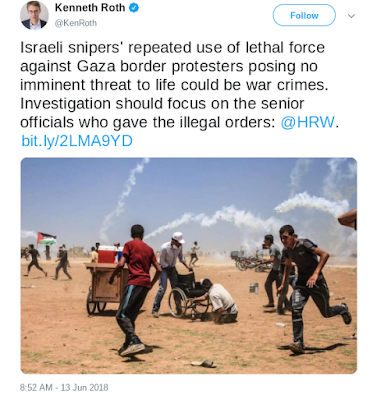 Using his position as executive director of HRW to support his Tweets condemning Israel for alleged illegal acts appears to imply that Roth is not merely offering an opinion, but is offering an assessment based on actual expertise and knowledge that he has.

Does Ken Roth actually have that kind of expertise?

It depends on where you look.

According to Wikipedia, Roth does have expertise:


His biography on the HRW website says he has "special expertise on: issues of justice and accountability for atrocities committed in the quest for peace; military conduct in war under the requirements of international humanitarian law; counterterrorism policy, including resort to torture and arbitrary detention; the human rights policies of the United States, the European Union, and the United Nations; and, the human rights responsibilities of multinational businesses."

Wikipedia indicates its source is the 2011 version of Ken Roth's bio on the Human Rights Watch website.

As recently as last year, in his book "International Law and the Use of Force against Terrorism", Shadi Adnan Alshdaifat writes in a footnote:

As far back as 2009, Roth has been credited with having this 'expertise':


On the HRW website, Roth is listed as having ‘investigated human rights abuses around the globe’, with ‘special expertise’ on issues of justice and accountability for atrocities committed in the quest for peace; military conduct in war under the requirements for international humanitarian law etc.

But when you actually take a look at his bio on the Human Rights Watch website, Roth's CV is more modest:


Prior to joining Human Rights Watch in 1987, Roth served as a federal prosecutor in New York and for the Iran-Contra investigation in Washington, DC. A graduate of Yale Law School and Brown University, Roth has conducted numerous human rights investigations and missions around the world. He has written extensively on a wide range of human rights abuses, devoting special attention to issues of international justice, counterterrorism, the foreign policies of the major powers, and the work of the United Nations. [emphasis added]

That has not stopped Ken Roth from regularly presenting his personal opinion on Twitter as legal fact.

This is reminiscent of the Marc Galasco controversy. Galasco resigned because of the optics of an avid collector of Nazi paraphernalia accusing Israel of war crimes. But there were questions about Galasco's expertise as well.

NGO Monitor has noted about Galasco:


Although the level of his expertise and experience are obscure, Garlasco consistently presents himself and is presented as an “expert” on weapons and military technology. He has no combat experience, and his various Pentagon positions were apparently not concentrated on dealing with the details of weapons systems. This has not prevented him from making public statements and authoring reports that project the pretense of both a detailed knowledge of weapons such as unmanned drones and white phosphorous, and an understanding of the implications of their use under international law.

Even the most basic qualification, that of critical objectivity, seems to be lacking at Human Rights Watch.

A report from NGO Monitor about Sarah Leah Whitson, HRW's director of its Middle East and North Africa [MENA] division, finds that:


“Whitson’s soft approach towards totalitarian regimes clearly is counterproductive and immoral, as in the Libya cover-up” adds Herzberg. “She met with Hamas in May 2010 to reassure the terrorist organization that HRW’s reports were ‘objective and impartial,’ while at the same time promising that HRW’s next report would denounce Israeli violations of international law. Prior to that, she solicited funds in Saudi Arabia to combat so-called pro-Israel ‘pressure groups.’ Instead of confronting human rights violators, the MENA division under Whitson has helped sustain their power.”

During a November 2010 trip to Lebanon, Whitson praised “the Lebanese sophistication for human rights,” contradicting HRW’s own Lebanon Director, Nadim Houry, who condemned the lack of effectual and accountable state institutions, the absence of political will to implement change, and the problems created by the country’s political “confessionalism.” Shortly after Whitson’s assessment, Hezbollah overthrew the Hariri government in a bloodless coup.

Whitson's lack of objectivity may be explained by her background.

David Bernstein of The Volokh Conspiracy notes what the HRW website omits about Whitson:


What the official bio doesn’t tell you is that Whitson was an active member of the New York chapter of the American-Arab Antidiscrimination Committee. She had served on the Steering Committee (source: ADC Times, Apr 30, 2002). When HRW hired her, she was serving a two-year term on the new Board of Directors, which replaced the Steering Committee (Source: ADC Times, Jan. 31, 2004).

The ADC styles itself as a civil rights organization, but like the Jewish organizations on which it is modeled, it also involves itself in Middle East issues, specifically by supporting the Arab and Palestinian cause against Israel. Local chapters are often more active on foreign policy issues than is the national organization.

...when HRW hired Ms. Whitson to be its Middle East director, it was hiring someone that was in the middle of serving what amounted to a second term on the Board of Directors of an organization that was firmly and openly on the Arab side in the Arab-Israeli conflict. And she had personally engaged in pro-Palestinian, anti-Israel activism while serving in that position. I don’t know whether she resigned her position when she started working for Human Rights Watch; if she didn’t, it was a clear conflict of interest. Regardless, it should hardly come as a surprise that one of her first acts at Human Rights Watch was to involve the organization in political action, supporting the campaign to get Caterpillar to stop selling tractors to the Israeli Army.

Human Rights Watch is not big on either expertise nor objectivity.