Those efforts ultimately prompted Brown’s government to “do all it could” to try to win the release of Abdulbaset Ali al-Megrahi, the former Libyan intelligence agent convicted of blowing up Pan Am Flight 103 over Lockerbie Scotland on Dec. 21, 1988, killing 270 people, according to an official British report released Monday.
UK charm offensive preceded Lockerbie bomber's release, February 7, 2011 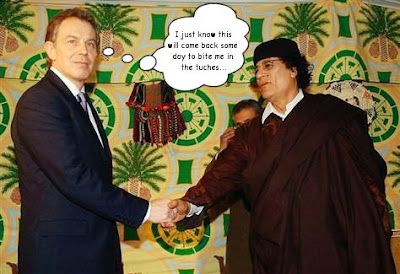 One can only imagine what kind of 'humanitarian' considerations went into Great Britain's thinking this time around:


An Arab terrorist jailed for duping his pregnant fiance into trying to sneak a bomb aboard an Israeli jumbo jet could be released early following a British court’s ruling Tuesday.

Nazir Hindawi’s 1986 attempt to bring down an El Al flight between London and Tel Aviv horrified Britons and led to the breakdown of relations between Britain and Syria, which Western officials blamed for organizing the plot. Hindawi received an usually stiff 45-year-long sentence for the crime, but he became eligible for parole in 2001 and has been lobbying for an early release since.

On Tuesday, London’s High Court ruled that a parole board should have the final say over the 56-year-old Hindawi, effectively bypassing British ministers who have repeatedly blocked attempts to free him...

The case has long stood out as particularly heinous example of international terrorism.

...British officials promised after the sentencing that Hindawi would spend at least three decades behind bars.

Apparently no case of terrorism is too heinous and no promise is too sacrosanct that Great Britain cannot find a way for a Muslim terrorist to be released upon the world.