Jilani, Chinkin and Travers Speak: But Can You Guess Who They Leave Out?

Read through this piece by members of the Goldstone Commission--Hina Jilani, Christine Chinkin and Desmond Travers--and see if you can spot the name they studiously avoid.
Or just scroll to the end--and I'll tell you.

In recent days some articles and comments appearing in the press with respect to the report of the United Nations (UN) fact-finding mission on the Gaza conflict of 2008-2009 have misrepresented facts in an attempt to delegitimise the findings of this report and to cast doubts on its credibility.


The mission that comprised four members, including Justice Richard Goldstone as its chair, came to an end when it presented its report to the UN human rights council in September 2009. The report of the mission is now an official UN document and all actions taken pursuant to its findings and recommendations fall solely within the purview of the United Nations general assembly which, along with the human rights council, reviewed and endorsed it at the end of 2009.

Aspersions cast on the findings of the report, nevertheless, cannot be left unchallenged. Members of the mission, signatories to this statement, find it necessary to dispel any impression that subsequent developments have rendered any part of the mission's report unsubstantiated, erroneous or inaccurate.

We concur in our view that there is no justification for any demand or expectation for reconsideration of the report as nothing of substance has appeared that would in any way change the context, findings or conclusions of that report with respect to any of the parties to the Gaza conflict. Indeed, there is no UN procedure or precedent to that effect.

The report of the fact-finding mission contains the conclusions made after diligent, independent and objective consideration of the information related to the events within our mandate, and careful assessment of its reliability and credibility. We firmly stand by these conclusions.

Also, it is the prerogative of the UN to take cognisance of any evidence subsequently gathered under domestic procedures that it finds credible and in accordance with international standards. Over 18 months after publication of the report, however, we are very far from reaching that point.

The mandate of the mission did not require it to conduct a judicial or even a quasi-judicial investigation. The mission and the report are part of a truth-seeking process that could lead to effective judicial processes. Like all reports of similar missions of the UN, it provided the basis for parties to conduct investigations for gathering of evidence, as required by international law, and, if so warranted, prosecution of individuals who ordered, planned or carried out international crimes.

In the case of the Gaza conflict, we believe that both parties held responsible in this respect, have yet to establish a convincing basis for any claims that contradict the findings of the mission's report.

The report recommended that proper investigations and judicial processes should ideally be carried out first of all at the domestic level, with monitoring by the UN. If these proved inadequate, it laid down a roadmap for the continuation of such processes at the international level. In line with these recommendations, the UN human rights council appointed a committee of independent experts to monitor the independence, effectiveness and genuineness of any domestic proceedings carried out to investigate crimes and violations of international law pointed out in the mission's report.

Many of those calling for the nullification of our report imply that the final report by the follow-up committee's two members, Judge Mary McGowan Davis and Judge Lennart Aspergren, presented to the human rights council in March 2011, somehow contradicts the fact-finding mission's report or invalidates it.

In the light of the observations of this committee such claims are completely misplaced, and a clear distortion of their findings. The committee's report states that, according to available information, Israel has conducted some 400 command investigations into allegations by the fact-finding mission and other organisations. Command investigations are operational, not legal, inquiries and are conducted by personnel from the same command structure as those under investigation. Out of these, the committee reports that 52 criminal investigations into allegations of wrongdoings have been opened. Of these, three have been submitted for prosecution, with two of them resulting in convictions (one for theft of a credit card, resulting in a sentence of seven months' imprisonment, and another for using a Palestinian child as a human shield, which resulted in a suspended sentence of three months). The third case, related to allegations of deliberate targeting of an individual waving a white flag, is still ongoing.

The committee has expressed serious concerns about the late start and slow pace of the proceedings, their insufficient transparency and the participation of victims and witnesses. Out of the 36 incidents relating to Gaza described in the fact-finding mission report, more than one third remain unresolved or without a clear status over two years after the conflict. The committee concluded that the slow progress could seriously impair the effectiveness of the investigations and prospects of achieving justice and accountability. Therefore, the mechanisms that are being used by the Israeli authorities to investigate the incidents are proving inadequate to genuinely ascertain the facts and any ensuing legal responsibility.

In addition, with regard to the issue of the policies guiding Operation Cast Lead, the committee states that there is "no indication that Israel has opened investigations into the actions of those who designed, planned, ordered and oversaw Operation Cast Lead". In other words, one of the most serious allegations about the conduct of Israel's military operations remains completely unaddressed.

We regret that no domestic investigations at all have been started into any of the allegations of international crimes committed by members of Palestinian armed groups in Gaza which have fired thousands of rockets into southern Israel. The committee observes the same in its report.

We consider that calls to reconsider or even retract the report, as well as attempts at misrepresenting its nature and purpose, disregard the right of victims, Palestinian and Israeli, to truth and justice. They also ignore the responsibility of the relevant parties under international law to conduct prompt, thorough, effective and independent investigations. We regret the personal attacks and the extraordinary pressure placed on members of the fact-finding mission since we began our work in May 2009. This campaign has been clearly aimed at undermining the integrity of the report and its authors. Had we given in to pressures from any quarter to sanitise our conclusions, we would be doing a serious injustice to the hundreds of innocent civilians killed during the Gaza conflict, the thousands injured, and the hundreds of thousands whose lives continue to be deeply affected by the conflict and the blockade.

The report has triggered a process that is still under way and should continue until justice is done and respect for international human rights and humanitarian law by everyone is ensured.

Did you notice what word was not mentioned at all--not even once?

Here's a clue: the title to UN Resolution S/9-1 that set up the mandate for the Goldstone Commission:

Here is another clue, the text of Resolution 10/21:


Follow-up to Council resolution S-9/1 on the grave violations of human rights in the Occupied Palestinian Territory, particularly due to the recent Israeli military attacks against the occupied Gaza Strip
The Human Rights Council,

Recalling also its decision to dispatch an urgent, independent international fact-finding mission, to be appointed by the President of the Council, to investigate all violations of international human rights law and international humanitarian law by the occupying Power, Israel, against the Palestinian people throughout the Occupied Palestinian Territory, particularly in the occupied Gaza Strip, due to the latest aggression, and that it called upon Israel not to obstruct the process of investigation and to fully cooperate with the mission,

Expressing with regret that resolution S-9/1 has not been fully implemented to date,

1. Requests the President of the Council to continue his tireless efforts to appoint the independent international fact-finding mission;

3. Demands that the occupying Power, Israel, fully cooperate with all relevant special procedures mandate-holders in the discharge of their mandates;

4. Also demands that the occupying Power, Israel, facilitate and provide unhindered access to the members of the independent international fact-finding mission;

5. Decides to remain seized of the matter.

Here is a third clue: a wordle by Elder of Ziyon, indicating which words were emphasized in the conclusion of the Goldstone Report--and which ones were not. See that black arrow on the right? Can you guess what word it's pointing too? Go ahead and click on the image to see the larger version. 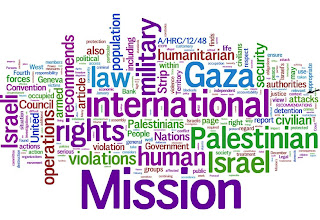 True, there are oblique references to "both parties"--but Hamas is not referred to by name even once.

These self-proclaimed 'defenders of human rights' have the chutzpah to claim:


Aspersions cast on the findings of the report, nevertheless, cannot be left unchallenged. Members of the mission, signatories to this statement, find it necessary to dispel any impression that subsequent developments have rendered any part of the mission's report unsubstantiated, erroneous or inaccurate.

On the contrary, the fact that to this day Hamas continues to fire rockets at civilian targets--from civilian areas in Gaza--both in obvious and deliberate violation of international law, clearly shows that the most flagrant aspersions on international law have been cast by Hina Jilani, Christine Chinkin and Desmond Travers themselves, who have signaled to Hamas that it need not take international law seriously.

Hamas knows that the Goldstone Report is a joke--and the fact that these 3 cannot even bring themselves to mention Hamas by name confirms that sorry fact.

Seriously, international law is a farce.

A report and the resolution that authorized it, cannot bring itself to mention Hamas by name even once, is worthless.

And where do Jilani, Chinkin and Travers get off sitting in moral judgment of Israel?