"We've Got Them!!"
I extended my Pesach greetings late last week, but knew I had to do this additional posting before Pesach began.

A gag order that was in effect during the course of the investigation of the terrorist attack on the Fogel family -- which saw the parents and three of their children (pictured below) cruelly slaughtered -- has now been lifted. 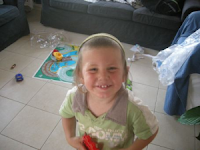 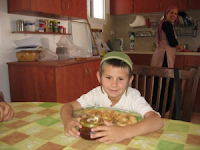 The commander of the IDF in Samaria Col. Nimrod Aloni has announced: "The murderers are in our hands."


The terrorists are Amjad Awad, 19, and Hakim Awad 18, from Awarta, an Arab village near Itamar, where the Fogel family lived. Members of the Popular Front for the Liberation of Palestine (PFLP), they were assisted by at least six others, four of them from the Awad family. All have been taken into custody.

They have confessed and expressed readiness to become "martyrs." Not only have they not expressed regret for their actions, they said they would have killed two other brothers who were in the house, had they known they were there.

Even during the blackout on news about the investigation, it was clear that the focus was the village of Awarta, where large numbers of people were rounded up and questioned. At one point residents were complaining because they were asked to give DNA samples. What seemed likely at that point was that at least one of the terrorists, having fought with Ruth Fogel, left behind hair, or blood, or skin under her nails.

Prime Minister Netanyahu congratulated the Shin Bet and the police today on the thoroughness of the operation that led to these arrests. "I was updated on the investigation's progress in the last number of weeks and days, and I must commend the Shin Bet and police who wanted to make sure their findings were complete, not only on the murderers themselves, but also for their accomplices."

Involvement with terror seems to be an Awad family proclivity. Arutz Sheva reports that the father of Hakim was also with the PFLP and had served time in Israeli prison, while an uncle was involved in a 2002 terror attack in Itamar that killed five people.

Still another uncle, says Arutz Sheva, burned the boys' bloodstained clothes, and took the knives they had used to Ramallah. Incredibly, the boys returned to school as if nothing had happened.

The weapons have now been recovered by Israeli authorities; the man who hid them is one of those now in custody.

Council chief of Awarta, Kais Awad (how much of this village consists of the Awad clan?), says he will demand an "international inquiry" because the boys who have been apprehended are "just children" and couldn't have done this. He believes the confessions were secured under duress and that "Israel wishes to cover up the crimes it committed in Awarta over the last month..."

But the fact that two young men -- they are NOT children -- could have done this makes it all the more chilling.

Already, there are calls for capital punishment for the slaughterers, following a judicial conviction. And I think this is a splendid idea. In fact, it should go as the Eichmann trial did -- boldly public, so the world can begin to see.

My gut tells me that anyone who slits the throat of a three-month old baby without remorse (decapitates that baby?) deserves to die. But there are issues of law. Adolph Eichmann is the only one who has ever been executed in Israel. Yet the law reads that capital punishment is possible in cases of genocide, war crimes, crimes against humanity, and crimes against the Jewish people.

I'll likely come back to this after Pesach. But it's time to send a bold message to our enemies and to the world: we will tolerate this no longer. That is, if there is the courage to go this route when the perpetrators are being called "children."

Col Aloni indicated that the motivation of terror groups in Judea and Samaria to carry out attacks against Israeli civilians is still high.

As far as I am concerned, this makes any suggestion (whether it was Barak's suggestion or Netanyahu's) that we pull back the IDF from certain areas of Judea and Samaria either breathtakingly stupid, or a sin.

And there's more. Also to be noted by my readers with great attention:

Dr. Aaron Lerner, Director of IMRA, placed a phone call today to S'ad Nimr, Minister of PA Detainees, and asked about PA policy with regard to the current PA demand for the release of all "detainees" (which includes all Palestinian Arabs in Israeli prisons for terrorist acts).

Asked Lerner, would the PA also demand the release of the two men just caught by Israeli authorities in connection with the murders in Itamar? Well, said Nimr, we don't know if the accusations are accurate. Assuming for the moment that they are, said Lerner, would the PA include these men in their demand that detainees be released?

Yes, replied Nimr. Palestinians have "a right" and "an obligation" to "resist the occupation."

Be very clear on this: a PA minister is justifying (as an "obligation") the brutal murder of children because of the "occupation."

This, of course, is no different from Hamas. Our "peace partners."

You can hear it all on Youtube. (Lerner's questions were not perfect in transmission, but the answers are quite clear.)


Kol hakavod (well done!) to Aaron Lerner on this.

Prime Minister Netanyahu will be in the US in late May, and House Speaker John Boehner has announced he will be inviting the prime minister to address a joint session of Congress. Will the prime minister be advancing a "peace plan"? Don't know. I'm not sure if he has decided yet.

But what I do know is that this is Netanyahu's chance to make Israel's case, boldly and with self-assurance -- with the whole world listening.

His message the last couple of days is less troublesome than prior rumors would have suggested:

"We will stand for our principles and fight those who try to dictate terms that would strip us of security and peace.

"We have been steadfast these two years, making sure that any peace agreement brings with it a secure, safe peace. Not just peace on paper, but a sustainable peace. I have set two core principles to that effect: the first - Palestinian recognition of the State of Israel as the Jewish people's homeland; and the second - real security arrangements on the ground."

Now we have to see these words expressed in Israeli policy -- in a refusal to cave to make others happy.

But what we're seeing right now with regard to policy is mixed. This comes as no surprise as Netanyahu often plays both ends against the middle, attempting to satisfy everyone at once.

A few days ago came a report from YNet that Netanyahu intends to honor his promise to residents of Itamar, following the grisly murder of the five members of the Fogel family, that building would be done in that community.

However, there was a legal proviso included: that Defense Minister Ehud Barak has to sign off on this as well. (My best information is that this is true, and that Netanyahu could not override it on his own, but would require some legal maneuvering.)

According to YNet, less than a week ago:

"Though Netanyahu's office refused to comment on the matter, sources told Ynet that he has ordered Cabinet Secretary Zvi Hauser and Minister Benny Begin to ask Barak to approve the plans as soon as possible."

However, I just spoke with Minister Begin, who says the report is in error and he has not been asked to do anything. He has no knowledge regarding whether Netanyahu will sincerely try to push this through, or will allow Barak to block it.

And then, in an interview in the Mishpaha newspaper, Minister of Housing Ariel Attias (Shas) now claims that -- contrary to his public statements -- Netanyahu has caved to Obama's demands and has de facto frozen building in the parts of Jerusalem that the PA claims.

The prime minister's office denies this, but Attias says, “The facts are correct." He says he cannot market new housing units that have already received the necessary bureaucratic approvals, because the government has not allowed tenders to be issued for contractors.

As to attacks from Gaza, Netanyahu said:

"We will not stand for fire on buses or on our children. We will not abide a situation where Israeli citizens are sleeping in shelters - anywhere."

Former National Security Adviser Maj. Gen. (res.) Giora Eiland joined the ranks last week of those saying that Israel should consider implementing a Defensive Shield-like operation in Gaza. Operation Defensive Shield -- which was initiated in Judea and Samaria in April 2002, in response to terror attacks on Israeli civilians -- totally shifted the dynamic and has made it possible for the IDF to consistently nab terrorists.

Meanwhile Deputy Foreign Minister Danny Ayalon, responding to the firing from Gaza of two Grad Katyusha rockets on Friday, has now said that there is no solution other than toppling the Hamas regime.

The US Senate unanimously passed a resolution on Thursday calling on the UN Human Rights Council "to reflect the author's repudiation of the Goldstone report's central findings" and rescind the report. It also asks UN Secretary-General Ban Ki-moon to work towards the "reform" of the Human Rights Council "so that it no longer unfairly, disproportionately, and falsely criticizes Israel on a regular basis."

Please, don't hold your breath waiting for this to happen. But celebrate a very supportive US Senate.

I want to end this posting by sharing an unusual and inspiring video. This is a speech by Cory Booker, the black mayor of Newark, NJ, delivered in February to a Chabad group: "Any Jew who wants to shrink from who he is, is not being Jewish," he tells his audience. "This is the spiritual question of our age...Where are we? ...Why do we persist in playing small?"

He speaks to Jews, and, I would suggest, if you substitute "Israeli" for "Jew," his message also resonates.

(Thanks to my sister, Loretta T., for bringing this to my attention.)

The arabs that call themselves Palestino's have descended far below the level of sub-humans.

I'm afraid that there is just one solution left: nuke 'em all.

Nimrod Aloni, I am sorry your boys didn't kill them where they stood. This is justice?

You can't deal with Arab animals with Western kindness. Its not a real deterrent.