Is The Red Cross Reluctant To Demand Hamas Provide Access To Gilad Shalit? 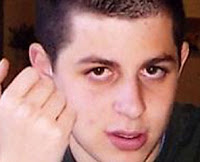 The Jerusalem Post has the story about the Red Cross trying to get some sign from Hamas of how Gilad Shalit is doing: Red Cross to Hamas: Send sign Schalit is alive.

If you get the impression from the headline that the Red Cross is demanding that the Hamas terrorist group comply with international law--you are mistaken:

The ICRC representatives attempted to persuade Mashaal to send a new sign of life from Schalit before the Passover holiday next week, according to the report. The last sign of life to be released by Hamas came in a video clip in September 2009.

"Attempted to persuade"--is that the best that the Red Cross can do?

It's not as if the Red Cross doesn't know how to demand things:


The NLRB has issued complaints on all four charges and a trial will be held soon. The last contract offer by the Red Cross was overwhelmingly rejected by CWAers [Communications Workers of America], in a 91 percent vote. In that offer, the Red Cross demanded that CWA drop all unfair labor practice charges against the company.


The International Committee of the Red Cross (ICRC) has demanded the release of eight of its staff members captured by militia in the Democratic Republic of Congo.

But it does not seem that the Red Cross is really asserting itself in the case of Gilad Shalit.

Of course, it does seem rather arbitrary to use this as an indication of any lack of forcefulness by the Red Cross--after all, my assumption depends on the arbitrary language the newspaper chooses to use. However, if you do a search for "demand hamas gilad" at swissinfo.ch, which is the source for the first and third stories above--you get just one hit:


Political analysts have explained the conflagration as an effort by Hamas to divert attention from demands, fuelled by pro-democracy unrest in the Arab world, for an end to its split with the Western-backed Fatah movement in the West Bank.

Even the one time the article from the Jerusalem Post does use the word 'demand' once--it is not in reference to the Red Cross:


Unlike previously, when the Schalits and activists working for Gilad’s release refrained from criticizing the Red Cross, activists recently demanded that ICRC representatives stop visiting Hamas prisoners in Israeli prisons until the Schalit family receives a sign of life from Gaza.

Yoel Schalit, Gilad’s older brother, gave a letter to the Red Cross in September of last year, in the hope that the organization would be able to pass it on to his brother.

Looks like the Schalits are themselves becoming more forceful and more demanding.
Don't you think it's about time the Red Cross do the same?