Yesterday, the first 15 families living in the five Ulpana houses slated for evacuation, by order of the High Court, moved out to their temporary homes ("caravillas" -- a misnomer, I think) on the grounds of a former army base. 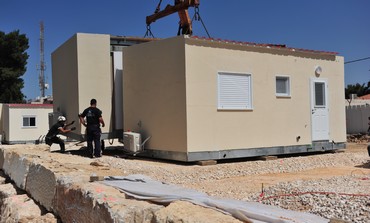 They went quietly but with deep sadness -- knowing in their hearts that an injustice was being done to them.  I carry that same knowledge in my heart.

I dealt with this issue of the injustice in some detail in a recent posting that can be accessed here: The Face of Things to Come.

And yet, I believe they acted properly in deciding to go quietly.  No active protest -- as was seen at Migron -- would have prevented this evacuation.  What it would have done is to pit Jew against Jew -- providing ugly fodder for the international press.

Their fighting would have convinced no one who did not already understand the rightness of their position, nor would it have reversed the situation.  Rather, it would have provided "evidence," for those quick to assert this, of the inherent violence of "settlers."  And it would have traumatized the children.

The pain of these residents and their sense of having been wronged has been made clear in public statements they have released.  Yesterday, one resident told YNet:

"This is a personal moment of grief, I'm in mourning. Our hearts are broken, but we will hold our heads up high. No one will break our spirit."

Whether the "victories" that have been negotiated, such as the building of 300 houses on that army base in Beit El, actually materialize will in large part depend upon the sincerity and determination of the prime minister.

The day began with an early morning outdoor prayer service. 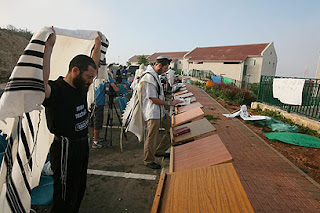 Following this, personnel arranged for by the Defense Ministry came to move the residents; reportedly  every effort was being made to ease the physical move.

The remaining families are due to be moved tomorrow.  Four families have said they will "passively resist."

The State has appealed to the High Court for an additional three months to take down the houses that are being evacuated. For the plan is not to simply tear them down, but to dismantle them and reassemble them on the army base -- although there are some dubious at to whether this can actually be done.

Also painful are the recent words of Ronald Lauder, because as president of the World Jewish Congress he does not speak only for himself.

Lauder, who recently met Abbas in London, has declared:

"There has never been a better time to make a peace treaty between the two peoples.  If both sides can sit down, I think a deal could be made quickly.  I fear that unless something happens to restart negotiations in the next several months, it could lead to another "Palestinian intifada."

How to begin to address the errors of this pathetic statement?  Of course, the time is anything but ripe for an agreement between Israel and the Palestinian Arabs.  And to say that a deal could be made quickly, when the sides are so very far apart?  Perhaps he's smoking something.

But lastly, to predicate the need for negotiations on the threat of another intifada is truly pathetic.

Perhaps even more pathetic, but very telling, is the suggestion Lauder is making that the Palestinian Arabs best come to terms with Israel now because maybe Romney will win the election.

He said, "The election in November...could have important consequences for the peace process."  What he clearly meant was, "Listen up guys, if Romney wins he won't cut you the slack that Obama has and you will no longer be able to count on the president representing your position."

Lauder would be well advised to take his cue from Zalman Shoval, former Israeli ambassador to the US, who has written a piece called "Still No Peace Partner" (all emphasis added):

"As expected, another attempt to restart Israeli-Palestinian negotiations a few weeks ago came to naught.  The Palestinians again refused to budge from their usual pre-conditions, i.e., a cessation of Israeli construction beyond the 'Green Line' including in Jerusalem; Israeli consent, in advance of negotiations, that the border between Israel and the future Palestinian state will be based on the 1967 armistice line (with territorial swaps); and freeing Palestinian prisoners.

"After meeting France's new President Francois Hollande, Palestinian Authority chairman Mahmoud Abbas told the press that he would agree to waive the conditions -- only to reiterate them a few minutes later, adding a new twist, i.e., to increase delivery of arms to his security forces.

"...Anyone with even a cursory acquaintance with the modern Middle East could without difficulty list a host of failed initiatives, some Israeli, some international (mostly American) to resolve the Israeli-Palestinian conflict, but more to the point, both historically and in terms of practical politics, one must go back to the underlying reasons why most of the initiatives have failed.  To wit, the refusal of the Palestinians, and most parts of the Arab world, to recognize the Jewish people's right to a national state, in a region that they consider to be an exclusive Arab and Muslim domain.

"Covertly and often overtly their refusal to recognize the right of the Jews is coupled with the hope that the ultimate fate of the Jewish state will be like that of the Crusader kingdom -- i.e., it will eventually disappear.

"...Ralph Bunche, the UN mediator at the time, confirmed, in response to an official Arab request, that 'the cease fire lines are not to be understood in any way to be political or territorial borders.'  Today Palestinian spokespersons and others who support Palestinian demands ignore this fact.

"...The unfortunate and inescapable conclusion to be drawn from the long series of failed attempts at peace negotiations is that as long as the Arabs, and principally the Palestinians, do not accept, psychologically and politically, the reality and the legitimacy of the existence of Israel as the Jewish nation state, they will not be true partners for peace."

Please note that Obama is primary amongst those supporters of Palestinian demands who ignore the fact that the cease fire line was not to be understood as a political or territorial border.

But of course there is a great deal more than agreement on the '67 line that the Palestinian Arabs are demanding.  The PA has just submitted to the Quartet a list of demands for returning to the negotiating table, and those demands seem to multiply exponentially.

Yup!  They're talking about going to the UN again.  According to the Palestinian news agency Wafa, the PLO decided on Sunday to ask the UN for recognition of a Palestinian state based on pre-1967 lines, membership in the United Nations and recognition of the right to self-determination.

I examined the relevant issues last year, when this threat was made, and will return to it as seems appropriate in coming weeks.

It's as if they're attempting to play all their cards at once.  Unilateral declaration of membership contravenes the agreements of Oslo.  But the PA wants to go to the UN and have the EU agree that this does not "contradict" peace talks.

Fatah has also announced that Abbas will be meeting in Cairo next month with Hamas politburo head Khaled Mashaal to work on that ever-elusive reconciliation.  (Note, above, that the PA wants the EU to support such reconciliation efforts.)

Hamas leader Osama Hamdan has indicated that he hopes the developments in Egypt will "positively impact" these efforts.  The "developments" in Egypt with election of a Muslim Brotherhood president can only work to strengthen the Hamas position, of course.

All of which impinges directly upon any possibility of Abbas moderating sufficiently to come to the table.

On Monday, there was quite a flap when the Iranian news agency FARS reported that Egyptian president-elect Morsi had given an interview in which he said he was seeking closer ties with Iran in order to establish a "strategic balance" in the area, and that he would revise the Camp David peace accord with Israel.

Subsequently Morsi denied having given such an interview, and, indeed, the recording FARS put on its website of that interview reveals a voice that is purported to be that of Morsi. but which apparently does not sound like him.  This was an Iranian scam.

At present the Israeli government is cautiously hopeful that the treaty will hold.

The acknowledgement of the Egyptian presidential election by Israeli leaders was proper but circumspect.  Netanyahu said that he "appreciates the democratic process in Egypt" and respects the Egyptian election results. "We look forward to working together with the new administration on the basis of the peace agreement between us,"

Obama called Morsi to congratulate him, and now Secretary of State Clinton, at a press conference, has expressed pleasure that Egypt appears ready to honor its international agreements.  Fair enough. But she couldn't leave it there, and added that, "We expect...president-elect Morsi, as he forms a government, to demonstrate a commitment to inclusivity that is manifest by representatives of the women of Egypt, of the Coptic Christian community, of the secular non-religious community..."

I think she's also smoking something.

Worthwhile to see this, from Ben Caspit, translated from a piece he wrote in Hebrew in Maariv on the situation in Egypt:

"We have reached the moment feared by generations of Israeli Intelligence and GSS chiefs. The ultimate nightmare scenario is playing out in front of our very eyes —the same narrative that played a major role in the terror scenarios that starred in the secret war games of the IDF and the Israeli defense system for an entire generation. The moment when Egypt fell — into the hands of the Muslim Brotherhood.


"...Morsi will get up every morning and have to feed 87 million Egyptians who multiply exponentially, and to finance unemployment payments to the millions of unemployed. He will look right and left, west, south and east, and will reveal that his only (relatively) peaceful border is the one he shares with Israel. He will understand that between the Sudanese and Libyans and Sinai Peninsula Bedouins — the only ones he can rely on, are the Israelis. He will make the trip to Washington and, yes, eventually he will go to Washington, where he will learn the numbers game.
"The Military Council has taken away Morsi’s jurisdiction over foreign affairs and security, and mainly — the power to declare war. They have left him the daily sewage of education, health, the pita and the fava-bean that are staples on every Egyptian table. So it’s too early to get into a funk. On the other hand, at this pace, depression will arrive at some point.
"Yes, life will be a lot harder from now on. 'Cast Lead 2'? It will not be simple. Third Lebanon War? Same as above. Let’s not forget that during the Second Lebanon War, Mubarak begged Olmert to crush Hezbollah. And with regard to Hamas, the Egyptians danced every time we lopped off heads there. Now, instead of a regional power that hates Hamas, a sister-state to Hamas sits on our southern border. The Muslim Brotherhood views Hamas as colleagues..."

Read: Morsi Is Israel's Nightmare, But The Sun Will Come Up Tomorrow

Russian president Putin was here briefly.  He agreed that a nuclear Iran would be a problem.

This rather grim posting also merits a look at some of the good stuff happening in, or involving, Israel.  Once more, from Good News From Israel :
~~~~~~~~~~

Technorati Tag: Israel and Ulpana and Morsi and Ronald Lauder.