In response to Steven Lee Myer's tribute to Hillary Clinton’s Last Tour as a Rock-Star Diplomat, Jonathan S. Tobin notes Hillary's failures as Secretary of State--which of course are a reflection of Obama's foreign policy in general.

While Tobin grants Clinton her success in securing the freedom of Chinese dissident Chen Guangcheng, Hillary's record over the past 3 1/2 years is not quite so rosy.

Those failures are also the failure of the Obama administration and of President Obama himself.

But there is another issue here according to Tobin--the failure of Hillary Clinton to push for her own views, which according to Tobin have lead to her being overridden on Afghanistan, Iraq, Russia on a number of human rights controversies:


Of course, the president’s views ought to prevail as a matter of principle, but Clinton’s inability to get her way on most issues and willingness to go along to get along tells us a lot about why he won in 2008 and she didn’t. Her “rock star” status has to do with her fame and long stay in the public eye as well as having the smarts to suck up to the press. But for all of her intelligence and abilities, this is not the profile of someone who was ever likely to be president. Though Barack Obama has been a terrible president in most respects, even reading the most flattering coverage of Clinton reminds us why he’s sitting in the Oval Office and she never will.

I suppose we got our first hint of this aspect of Hillary Clinton back in 1999, from her reaction after hearing Suha Arafat proclaim:


Our [Palestinian] people have been submitted to the daily and intensive use of poisonous gas by the Israeli forces, which has led to an increase in cancer cases among women and children. 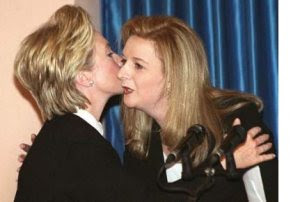 Email ThisBlogThis!Share to TwitterShare to FacebookShare to Pinterest
Labels: Hillary Clinton's Failure As Secretary of State, The Disaster of Obama's Policy In The Middle East