BDS BalderDaSh: No, TIAA-CREF Is Not Divesting From Caterpillar (2 UPDATES!)

Despite posts on Divest This:
The Associated Press apparently found the story irresistible, even though they had to contradict themselves in their story Caterpillar pulled from social indexes over company’s use in Palestinian territories.
After opening with:


A U.S. investment firm has removed Caterpillar Inc. from three of its popular indexes that track socially responsible investments, citing concerns about the Israeli military’s use of company bulldozers in the Palestinian territories.

The decision by the American investment-support firm MSCI Inc. was welcomed Wednesday by pro-Palestinian groups that have called for boycotts of companies that profit from Israel’s occupation of the West Bank. It has already had at least one concrete effect, leading mutual fund giant TIAA-CREF to divest itself of $72 million in Caterpillar stock from its “Social Choice” fund, which tracks one of MSCI’s indexes.

and clearly claiming that TIAA-CREF was "concretely" effected by the MSCI descision, by the end of the story we read:


While the U.S.-based “We Divest” campaign claimed credit for pressuring TIAA-CREF, the extent of the group’s role is unclear.

TIAA-CREF said its decision was not influenced by any outside pressure.

“Literally the only reason that (Caterpillar) came off our list was because it came off MSCI’s index,” said a company official, speaking on condition of anonymity under company policy.

MSCI has said it relies on an internal research group and a set of rules-based methodologies for decisions about its ESG indices.

When I wrote to TIAA-CREF as an investor, the received a straightforward response:


I am responding to your June 22 email concerning the removal of Caterpillar (CAT) from all TIAA-CREF Social Choice portfolios. I appreciate this opportunity to be of assistance.

TIAA-CREF continues to stand by our original position on the Jewish Voice for Peace request for divestment, which is that while we acknowledge participants’ varying views on Israeli and Palestinian policies and the Gaza Strip and West Bank, we are unable to alter our investment policy in accordance with those views. Our responsibility to earn a competitive financial return on the retirement savings entrusted to us by 3.7 million participants obliges us to invest in a diverse line-up of companies across all sectors of the global economy.

Our decision to end our investment in Caterpillar within our Social Choice portfolios is due instead to other factors. These include its ESG (Environmental, Social and Governance) rating downgrade resulting from employee health and safety, labor relations, and toxic releases.

Every year we rebalance our portfolio to reflect deletions and additions. The removal of Caterpillar from our Social Choice funds does not impact any other TIAA-CREF funds.

Which does leave the question if in fact other TIAA-CREF funds are indeed still invested in Caterpillar.

Interestingly, as Divest This points out, if you check the MSCI index, you see the countries Burma and Sudan specifically targeted as countries where investment is to be avoided--but not Israel.

The BDS group continues to wait for instances of investments being re-balanced and then jump in to take credit for the change as if it was the result of their actions.

One is reminded of the story of the man who while walking in the forest, noticed tree after tree with a target drawn on it and an arrow in the bulls-eye. When he finally caught up with the archer responsible and expressed his admiration, the archer admitted his secret: he fired the arrow first and then drew the target around the arrow.

UPDATE: Thanks to commenter Empress Trudy, I found that Elder of  Ziyon blogged that now the Palestinian Arabs themselves are using Caterpillar equipment: 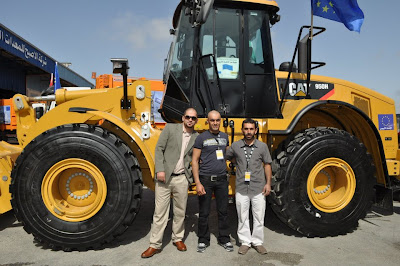 The people at BDS seem to be terribly out of sync with the people they claim they are trying to help.

SECOND UPDATE: Above, in response to the email I received from TIAA-CREF, which ended:


Every year we rebalance our portfolio to reflect deletions and additions. The removal of Caterpillar from our Social Choice funds does not impact any other TIAA-CREF funds.


Which does leave the question if in fact other TIAA-CREF funds are indeed still invested in Caterpillar.

Now a commenter left the following:


A quick review of TIAA-CREF's statement of investments indicates that they own Caterpillar in at least four other equity funds.

Also, as pointed out by the same commenter:


Here's your on-line verification directly from TIAA-CREF's site. Follow this link http://www.tiaa-cref.org/public/performance/retirement/profiles/1002.html
then click on statement of investments on the right hand side of the screen. Open the PDF and search for Caterpillar.

The PA made a big public even of unveiling a large amount of industrial equipment FROM Catepillar late last week.

Thanks for the heads up!
I added it to the post.

A quick review of TIAA-CREF's statement of investments indicates that they own Caterpillar in at least four other equity funds.

Thanks for the heads up!

Here's your on-line verification directly from TIAA-CREF's site. Follow this link http://www.tiaa-cref.org/public/performance/retirement/profiles/1002.html
then click on statement of investments on the right hand side of the screen. Open the PDF and search for Caterpillar.