The Dark Side of Dr. Seuss


There are two ways to interpret "Green Eggs and Ham." The first--to which I do not subscribe--was suggested to me by a colleague with small children. It is as a terrifying torture-and-kidnap story: It begins, famously, with a question, "Do you like green eggs and ham?"--and a proffered platter. In spite of its unorthodox greenness, the ham looks rather succulent. Yet the offer is refused. The Protagonist--a typical Seussian creature with furry exterior and rumpled top-hat--then retreats grumpily to his house, where Sam-I-am harasses him, confronting him first with a rodent, and then with a smug-faced fox.

The Protagonist flees, Sam-I-am pursues him in a car, and then brings on a very forward goat, posing the question that has always amused the schoolboy in me: "Could you, would you, with a goat?" He then runs the car off the road, dumping the Protagonist (along with a bevy of innocent train passengers) into the sea. At this point, in self-defense, the victim adopts the worldview of his assailant and, Patty Hearst-like, becomes a propagandist for Sam-I-am's cause.

Hmmm...I don't know about "Green Eggs and Ham", but I have a bone to pick with Dr. Seuss on another point. I have not read a lot of his books, but I have read enough to have come to the conclusion that Dr. Seuss has definite issues with playing host to unwanted guests.

The "Cat in the Hat" is the sad tale of everyone's uninvited guest. If that was the only such book, that's one thing--but there was a sequel! "The Cat in the Hat Comes Back" (which Dr. Seuss probably thought flowed better than the more ominous: "The Return of the Cat in the Hat"). That's two. Now you can argue that in both cases there is a happy ending, all the mess is cleaned up, and the mother is no wiser.

But how about "Thidwick The Big-Hearted Moose"! Here is your typical nice guy moose who first let's a bug live in his antlers. One thing leads to another and before he knows it he has bugs, birds, and animals (including a bear) living in his antlers--all because he is much too nice to tell them to leave. His fellow moose desert him! Thidwick is left all alone (except for his unwanted guests) when the hunters come. With such a heavy burden on his antlers he cannot run and the hunters chase after him and corner him. They are all set to kill him, stuff him, and mount him on their wall. Thidwick is trapped!

Then, he realizes that this time of year he can shed his antlers. The antlers come free and he tosses them--with the guests--at the hunters and makes his escape as he joins his fellow moose.

But then there is the last page: 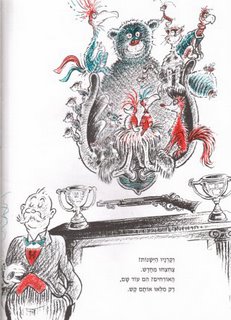 There they are, the antlers on the wall with all of the guests--stuffed and mounted on the wall as trophies. And look at their eyes! (The horror! The horror!) I was honestly surprised to see the story end this way--I expected the guests in the end to come to Thidwick's rescue. I bought the book 2 years ago and when I read it to my daughter, I still end it with Thidwick rejoining his friends...without turning the last page.

After having read Varadarajan's piece, I now know I am not alone in having discerned the heart of darkness behind these books.

I may have to stick to "Curious George"--a metaphorical expose of America's capitalist exploitation of Third World Countries.

Technorati Tag: Dr. Seuss and The Cat in the Hat.
Posted by Daled Amos at 10:52 PM