A stressful but meaningful day. As I left Tsfat with my traveling companion, Yeshivat Chovevei Torah student, Yonah Berman, we met Elliot Chodoff, a major in the IDF reserves, who had just received a Tsav 8 call up notice. He pointed out that Hezbollah is playing mind games with the IDF.

On the way to Haifa, we picked up two soldiers who turned out to be Druze. For a moment I wondered whether this was a set-up for a kidnapping. Such is the power of terrorism. It turns everyone into a suspect. It's almost as if everyone has lost their innocence.

As we approached Haifa, Dr. Jesse Lachter who was to meet me, called and told us the siren was sounding. “Pull over the car and hit the ground,” he said urgently. It wasn’t long till we found out that someone was killed in Haifa today by a direct hit on their car. It reminded us again that what is happening here is real. 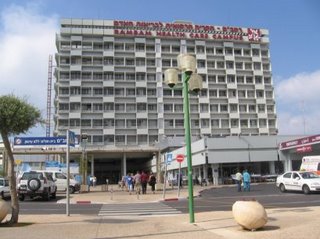 Dr Shraga Barzel, who spent a year in Riverdale in the early 90s and who heads the neo-natal unit at Haifa’s Rambam Hospital met us at the gate.

As we went inside the hospital, ambulances pulled up with the injured from the latest Haifa rocket attack. Outside, we saw rows and rows of cots as doctors and nurses quickly took the injured inside.

Dr Barzel and Jesse brought me to the office of the Director General, Dr Beyar, who pointed out that there's a great need at Rambam to build a unit that will be secure from rocket attacks. In the midst of our conversation, another siren sounded, and we all gathered in an adjacent vestibule for protection.

From there we walked into the dining room that had been turned into a makeshift triage section. A nurse was dealing with someone who looked like a very troubled individual. Jonny was clearly suffering from stress. We were told that he enjoyed soccer, and a smile crossed his face when we discussed Italy’s World Cup victory. 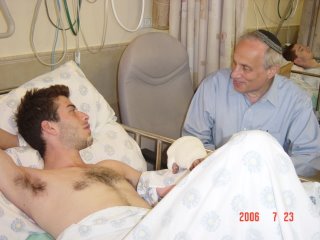 In the hospital we visited a number of injured soldiers. Amongst them was Ronen who had been injured when he left his tank to help a comrade who was hurt. He looked so young and so shell-shocked, all we could do is tell him he's not alone, that our people are with him.

As we left the hospital and started to climb the Carmel to Jesse’s home, I felt overwhelmed by all the pain I had seen. Jesse turned to me and said it looks like you need a psychiatrist. He pulled out a CD of my dear friend, Elli Kranzler, a professional psychiatrist and brilliant soul singer at our Bayit in Riverdale. Elli and his daughter, Ravital were singing the haunting words of the Psalm, Gam Ki Elech-“Even though I walk in the valley of the shadow of death, I fear no evil for You are with me.” On the right side of the car, I could see the blue waters of the Mediterranean Sea. Above our heads, the heavens sprinkled with fluffed white clouds, and on our left, the Carmel housing projects neatly tucked into the mountains, beautifully built by the people of Israel. It all seemed so peaceful, and yet we were walking in the valley of darkness. For the first time during this visit, tears came to my eyes.

Jesse took me to see his rabbi Edgar Nof, who leads the Or Hadash Reform synagogue. I felt a special connection to him. Rockets and katysuhas don’t distinguish between people. They kill all kinds of Jews and for that matter, non-Jews as well.

As I entered Jesse’s home, I reconnected with his wife, Noga. Noga's brother Effie was killed in the 1982 Lebanon War. She recalled my condolence visit to her family. Upon leaving, I recited the traditional Hamakom Yinachem Otach, which I explained to mean, May God comfort you. She reminded me that her father, Mordechai, the head of Zim Lines in New York, looked up at me and said, “Let me tell you the real meaning of Hamakom. Hamakom should be literally translated as ‘this place,’ the land of Israel, it is my only comfort.”

We moved on to the Elisha Hospital. Just as Elisha the prophet brought the dead back to life, this hospital for patients in a vegetative state carries his name, in the hope that somehow they will be revived.

We saw several soldiers at Elisha, but the one I'll always remember is Koby, a man in his 30s, who some 13 years ago was present at a terrorist bombing in Ashkelon. He ran to help the injured and then returned again to help others, only to be seriously wounded. He has been in a coma ever since that day. Seeing Koby reminded us that terror attacks often leave terrible aftermaths that go well beyond the moment of terror itself.

A private nurse sits with each patient at Elisha Hospital. The government provides around-the-clock private nursing for these patients. Most often, these special caretakers are immigrants from Russian-speaking countries. I thought of the countless demonstrations held all over the world demanding freedom for Soviet Jews. Today they are free in the land of Israel, trying to free others from their state of unconsciousness.

We reached out to hold Koby’s hand and the hands of those attending to him and started to sing Rav Shlomo Carlebach’s melody to Am Yisrael Chai, the Soviet Jewry theme song. Somehow, the song seemed much slower and sadder than usual. I looked up and saw Yonah holding the hands of some of the soldiers. I was overwhelmed by his obvious care and gentleness and gratified to see that all the experience and teaching he has received at Yeshivat Chovevei Torah, including the pastoral psychology classes, had made a big impact. Yonah will be an extraordinary empathetic rabbi.

We paid a visit to the Chief Rabbi of Haifa, Shaar Yashuv Cohen. As soon as we walked in the siren went off and we quickly walked into the shelter. I couldn’t help recalling a visit with the Chief Rabbi of Tel Aviv, Meir Lau during the Gulf War in 1991 when we ran through the streets as the Scuds fell. 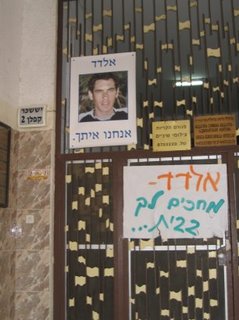 We traveled north to Kiryat Motzkin to visit the family of abducted soldier, Eldad Regev. As we entered the apartment building, we saw a large picture of Eldad with the words, ‘We Are Waiting for You: We Are With You.’

We knocked on the door and were greeted by Eldad's brothers, Eyal and Ofer, and their father, Zvi. We were immediately taken by their graciousness. Despite the immense stress of their situation, they were so hospitable; just normal people in the most abnormal circumstances. As we told them we wanted to do whatever we could for them it became clear that these were very private people. The very idea of beginning a public campaign for Eldad’s release was not compatible with their reserved nature.

Listening to the family speak, especially an aunt, who spoke of her family's history during the Shoah, I sensed that they felt so terribly vulnerable--so helpless. What they are feeling reflects on some level what is happening in the country. The rockets land, no one knows quite where, or where the next one might land. From that instant everyone is exposed. As strong as Israel is, we're not invincible, we're vulnerable. Many Israelis in recent days have expressed the deeply held conviction of “Ayn Lanu eretz Acheret”-We don’t have any other land besides Israel. 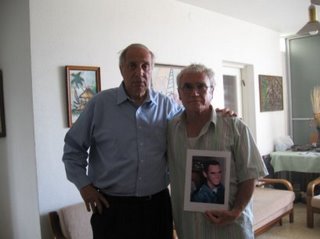 Hezbollah cannot destroy the state. But by instilling fear they are fulfilling their goal of breaking the morale of the people. I see the fear in the eyes of parents as well as children as they run to the shelters. The deserted towns of Carmiel and Tsfat reflect the same fear.

So Diaspora Jewish communities must do all we can to respond by giving strength, lending moral as well as financial support to the land of Israel and its people.

Here in Israel, everyone is doing something. Last Shabbat, Natan and Avital Sharansky spent the weekend at a One Israel camp for kids evicted from their homes in Gush Katif last summer, many of whom are living in southern areas under constant Kassam attack. Natan played chess with the youngsters. Hundreds of Israelis in areas beyond rocket range have opened their homes to house refugees from the north. Volunteers man telephone hotlines, and others collect food and supplies for those confined to shelters for almost two weeks.

As we head back to Tsfat the images of those we have seen today flash through my mind. All we could do is recite a simple prayer: May God be with the people and the land of Israel.

As a resident of Kryat Motzkin, its pretty hard seeing the awkward reality of kidnaps so close to my door. There's always army men no the kidnapped guy's place, as a reminder...