I am referring to the speech Prime Minister Netanyahu gave at Bar Ilan University last night.

Credit: TimesofIsrael
There had been considerable anxiety prior to that talk.  Four years ago, when he delivered a similar talk at Bar Ilan, he first embraced the "two state solution."  In the run-up to his talk this time, the word was that he was going to announce a change in policy.  Rumor had it that it would involve a proposal for an "interim" state, since reaching a final accord would not be possible; but such a proposal would have been a disaster.
Thus were we most pleasantly surprised when no such proposal was advanced. Nor was any suggestion made that we have to give more, sacrifice, etc. etc. in order to make an accord possible.  What a relief!
~~~~~~~~~~
This talk by the prime minister indeed did represent a new policy.  What he has done - which is marvelous and long overdue - is to tell the truth about the situation and put the onus where it belongs: squarely on the Palestinian Arabs.
This was truth that was unvarnished and most definitely not politically correct.  He spoke for the Israeli position.
~~~~~~~~~~

I have been surprised as to how little press this talk has received, for the policy it enunciates inevitably will have considerable impact on the "negotiations," and on the diplomatic climate more broadly.
I had delayed posting last night, in the hope that the text of his talk, in English, would be available this morning. But when it was not, I wrote what follows below as summary -- drawn primarily from my notes taken as he spoke.
Yet now, at this very moment, as I am about to put this out, I have discovered that the full text of the talk is at last available, put out by the prime minister's office and up on IMRA.
I will leave my summary, in hopes that it will be helpful to you -- and provide full links following.  The full speech, needless to say, is more powerful than any summary.
Netanyahu began by reiterating his position on Iran, but I will move directly to what he said about Israeli-PA negotiations, as this is where he charted a different path:
~~~~~~~~~~
We are the exception to the pattern of history.  We were on this land (Israel) 4,000 years ago, and we are here now. This is, at once, our history and our future.
We have achieved a peace agreement with Jordan, and with Egypt - which has not been easy.  And for the last 20 years, without success, we have been attempting to reach a peace agreement with the Palestinian Authority.
To bring about the end of the conflict, we must understand the root of that conflict.
We are told that it is "occupation" that is the root: that "settlements" perpetuate the conflict.
But in reality, the conflict began in 1921, when Palestinian Arabs attacked Beit Haolim in Yafo (Jaffa), which housed new Jewish immigrants.

"Many Jews were killed in this attack, including the well-known writer Y.H.Brenner. This attack was directed against Jewish immigration.

"My grandfather arrived in Jaffa, at that same house, the year before, as did many others. Clearly this attack was not about territory or settlements; it was against Jewish immigration to the Land of Israel."

Then in 1929, there was an Arab massacre in the ancient Jewish community of Hevron, where Jews were "brutally slaughtered."
From 1936-39 there were multiple Arab attacks against Jews.
In 1947, an Arab state was proposed in part of Palestine, along with a Jewish state. But the Arabs refused.  The issue wasn't an Arab state, the issue was a Jewish state.
From 1921 to 1967, the Arabs attacked even though there was no "occupation."
Up until 1967, they [i.e., Arab states] had formed a "loop of strangulation" around Israel.  "There were no territories. There was no 'occupation.'"
And now, attacks continue from Gaza where rockets are launched against us, even though we left Gaza.  They want to liberate ALL of Palestine, they say.  Which means Beersheva, and Haifa, and Yafo...
The Palestinian Authority is not the same as Hamas.  But there is still a problem.
We ask that they recognize us as the Jewish state, and they say, "We recognize Israel."  We ask them to recognize us as the nation-state of the Jewish people, and they say, "No, we recognize the Israeli people, Israel."
They won't even forgo the "right of return," which would bring millions of Arabs into Israel, undermining its Jewish nature from within.
There will be no peace until they recognize the nation state of the Jewish people.
Now, the senior leader of the Palestinians from 1921 to World War II was the Mufti Hajj Amin al-Husseini who actively cooperated with the Nazis and encouraged the genocide of the Jewish people. There is even evidence that he visited the gas chambers with Adolph Eichmann.
These roots must be eradicated: The Palestinian movement still admires the Mufti.
The root of the conflict is the [Palestinian Arab] opposition to the right of the Jewish people to be in the Land of Israel.
We must hear the PA leadership acknowledge our rights before we can proceed to other issues.
And the next issue, first and foremost is security.  We would need arrangements that provided genuine security, without the presence of international troops [something that is often proposed].  That the state would have to be demilitarized is obvious, given our experience.
After generations of incitement [by the PA], we do not have security.  Even if the PA leadership were to accept the concept of a Jewish state, and a Jewish people living in the Land, we do not believe this concept would trickle down to the people. We would still need security [i.e., against continuing terrorism].
For real peace, we would be willing to make real sacrifices.  And let me tell you, it would be hard. We are willing to recognize their nation state, "and that is at great cost - it involves territories, our ancestral lands, which is not insignificant."
But first they have to recognize the nation-state of the Jewish people.

"The political process with the Palestinians...will be deemed successful only if it is built on the foundations of truth, the truth of the present and historic truth and unfortunately, the truth that is under constant attack from our enemies and opponents. They try to undermine the ancient connection of our people with the Land of Israel "

~~~~~~~~~~
Netanyahu did not say, as many would have wished, that negotiations are terminated forthwith.
But he made it clear that they're not going anywhere, and that no one should expect a final deal in the early months of 2014.
He said nothing about obligations Israel has. to make further "concessions," to advance those negotiations.  He's finally got it right: First things first.
He did not say we would be annexing Judea and Samaria forthwith - not even Area C.  But he did say that the Palestinian Arabs are onour ancestral land.  The implication, as he said it, was that under the right conditions he might consider the establishment of a Palestinian state on part of that land (a difficult sacrifice).  That is most regrettable, but he knows, we all know, that we are not going to see the development of those "right" conditions.
What I think is important here, is that he has begun to stand for Israeli rights, including rights to the land.  SAYING that it's our land -- while a given to many of us -- is significant, as Abbas eternally babbles on about the '67 line and is forever denying our ancient connection to the land.  THIS is what the world needs to hear, enunciated first by our head of state.
What is happening here is a beginning of a new time that can move in due course to that annexation - if we are mindful of what needs to be done to stay strong and to promote this.
For so long - since the beginning of Oslo - our rights have gotten lost because support of the Palestinian Arabs was politically correct and because they spoke out their demands loud and clear, while many of our leaders equivocated.  It is a source for celebration, that we should begin to see this turn-around.
I am aware of commentators who are disgruntled because Netanyahu's turn-around was not complete.  Me?  I see a process and greater cause for optimism. I see possibility.
I cannot emphasize enough the importance of all of us staying the course now.
~~~~~~~~~~
Every word Netanyahu spoke about the Mufti is true, but I would add this:  The Mufti was al-Husseini.  Yasser Arafat was from the Husseini family and the Mufti was his mentor.  Arafat referred to him as "uncle."  Mahmoud Abbas, before succeeding Arafat, was for many years Arafat's disciple.
Connect the dots, my friends.  These people have no legitimate claim to anything.
~~~~~~~~~~
As this speech has not received much press, I ask that you share this posting very broadly, so that people can begin to understand our prime minister's new, enunciated position.
The full speech, translated from Hebrew into English, can be found here:
Text: PM Netanyahu speech at Bar Ilan University 6 Oct 2013
The speech in Hebrew can be found here
~~~~~~~~~~
Elder of Ziyon has provided a link to a video of the talk, which was, of course, in Hebrew.  It has English translation voice over, and you will find it more audible if volume is not too high.  The video is of the entire proceedings at Bar Ilan last night -- with a host of introductory goings-on.  The prime minister begins his talk at about 50 minutes.  If you want the content on Israeli-Arab relations that is summarized above, go to almost 1 hour.
It is worthwhile to see his presentation, because he is excellent.


~~~~~~~~~~
You have here an example of precisely what PM Netanyahu is addressing, in several regards:
Noam Glick, a little girl of nine, was shot this week by a terrorist in her own yard, in the community of Psagot, which is in the Binyamin area of Samaria, not far from Ramallah.  She had startled a man who was about to enter her house; he shot her and fled.  Thank Heaven her injury, because of its location, was not serious.
Jabil Rajoub, a top official of Fatah (again: the predominant party of the PA, the party of Abbas), was asked by Kol Yisrael radio if he condemned the attack. His answer (emphasis added):

Read: Fatah Official: Israel is to Blame for Psagot Attack
No further comment is necessary.
~~~~~~~~~~
Rabbi Ovadiah Yosef, former Sephardic Chief Rabbi and major authority in halakha (Jewish law), passed away today at 93 after a long illness.  He has been spiritual leader of Shas since its founding. 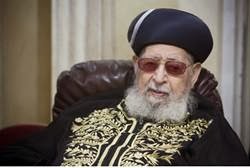 Credit: Flash 90
Over half-a-million people attended his funeral today in Jerusalem.
Defense Minister Moshe Ya'alon had this to day about the rabbi:

“I have known Rabbi Yosef for years. I met with him at his request, in order to present to him my views on security matters and political issues. I also met him several times, when I was IDF Chief of Staff and Defense Minister.

“In all our meetings, the Rabbi expressed great concern for the security of the country. He was very aware of what was going on inside and outside of Israel. The greatness of his personality came out in that he not only was a great adjudicator of Jewish law, but also in that he always listened to different opinions before he took a stand. And he did this with an open mind and with patience."

Read: Ya'alon: Rabbi Yosef Very Concerned With Security Mattters
~~~~~~~~~~
© Arlene Kushner. This material is produced by Arlene Kushner, functioning as an independent journalist. Permission is granted for it to be reproduced only with proper attribution.