It is a role that Congress shares with Prime Minister Benjamin Netanyahu of Israel, who warned the United Nations that Mr. Rouhani was a “wolf in sheep’s clothing,” and urged the United States to ignore his conciliatory words and redouble the pressure on Iran.

“Netanyahu’s speech was widely ridiculed in this town,” Mr. Kupchan said, “but it largely reflects the views of many members of Congress.”

I’m sure that in some Washington circles – those who believe words and meaningless agreements are more important than actions – Netanyahu’s speech was ridiculed. But I’m not convinced that it was widely ridiculed.

That comment was followed up by a fuller attack on Netanyahu, Netanyahu Takes a Lonely Stance Denouncing Iran.


With a series of major speeches — three more are scheduled next week — and an energetic media blitz, Mr. Netanyahu, 63, has embarked on the public-diplomacy campaign of his career, trying to prevent what he worries will be “a bad deal” with Iran. Insisting on a complete halt to uranium enrichment and no easing of the economic sanctions he helped galvanize the world to impose on Iran, Mr. Netanyahu appears out of step with a growing Western consensus toward reaching a diplomatic deal that would require compromise.

But such isolation is hardly new to a man with few personal friends and little faith in allies, who shuns guests for Sabbath meals, who never misses a chance to declare Israel’s intention to defend itself, by itself.

“Netanyahu is most comfortable predicting disaster, scaring people into doing something,” said Mitchell Barak, a Jerusalem political consultant who worked for him in the early 1990s and has watched him closely since. “The problem is now he’s lost momentum. His message is clear, his message is the same, the situation is the same, but everyone else’s perspective has changed. It’s like you’re the only one in a dark room with a flashlight.”

I don’t remember this Mitchell Barak, but he sounds like a one time supporter who soured on his former employer. In other words, he’s not exactly a disinterested observer.

Still how “out of step,” is Netanyahu? 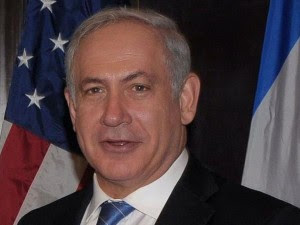 Significantly, in his speech before the UN’s General Assembly two weeks ago, said:


Like everyone else, I wish we could believe Rouhani’s words. But we must focus on Iran’s actions.

And it’s the brazen contrast, this extraordinary contradiction between Rouhani’s words and Iran’s actions that is so startling. Rouhani stood at this very podium last week and praised Iranian democracy. Iranian democracy, he said.

But the regime that he represents executes political dissidents by the hundreds and jails them by the thousands.

Rouhani spoke of “the human tragedy in Syria.” Yet Iran directly participates in Assad’s murder and massacre of tens of thousands of innocent men, women, and children in Syria, and that regime is propping up a Syrian regime that just used chemical weapons against its own people.

Rouhani condemned the “violent scourge of terrorism.” Yet in the last three years alone Iran has ordered, planned or perpetrated terrorist attacks in 25 cities on five continents.

Rouhani denounces “attempts to change the regional balance through proxies.” Yet Iran is actively destabilizing Lebanon, Yemen, Bahrain, and many other Middle Eastern countries.

And just three weeks ago, an Iranian agent was arrested trying to collect information for possible attacks against the American Embassy in Tel Aviv. Some constructive engagement!

Yet everything that Netanyahu said in those paragraphs – about Iran’s involvement in Syria, its sponsorship of terrorism, its destabilization efforts in the Middle East, the attempt on the Saudi ambassador and spying on the American embassy have all been reported by the New York Times. Does the New York Times believe that all it has reported on Iran’s state sponsored terrorism is false or, at least, inconsequential?

The real question is not why Netanyahu is “out of step,” but why people read a few moderate tweets and assume that they mean more than very aggressive and hostile actions?


A year ago, Iran’s growing stockpile of uranium enriched to 20 percent appeared to be the most dangerous piece of its nuclear infrastructure, because that material could be quickly converted to bomb-grade. The enrichment takes place in an underground facility that has little plausible use other than for weapons production. A freeze or shutdown of that plant and the securing of the material already produced, if accepted by Tehran even six months ago, would have eased the threat that Iran could race to produce a bomb sometime soon.

Since then, however, Iran has begun installing a new generation of centrifuges at its largest enrichment plant, in Natanz. Because they can process uranium far more quickly, these new machines create a threat of an Iranian nuclear breakout beyond that posed by the 20 percent stockpile. Meanwhile, a new reactor based on heavy-water technology, in Arak, is due for completion next year and would allow Iran to produce plutonium that could be used in bombs.

Any accord with Iran, even an interim arrangement, must take these new facts into account. No sanctions relief should be granted unless Iran takes steps that decisively push back its potential time frame for producing the core of a nuclear warhead. That means that the advanced centrifuges and the Arak reactor must now be part of any deal.

This might as well have been taken from Netanyahu’s speech. It’s clear that the editors of the Washington Post don’t accept the premise of the New York Times that the goal of negotiations with Iran is not simply to reach an agreement, but rather to reverse Iran’s progress towards the creation of nuclear weapons. It also shows that Prime Minister Netanyahu is neither as ridiculed nor as isolated as the New York Times would like to pretend.


Technorati Tag: Israel and Media Bias and Netanyahu and Rouhani.