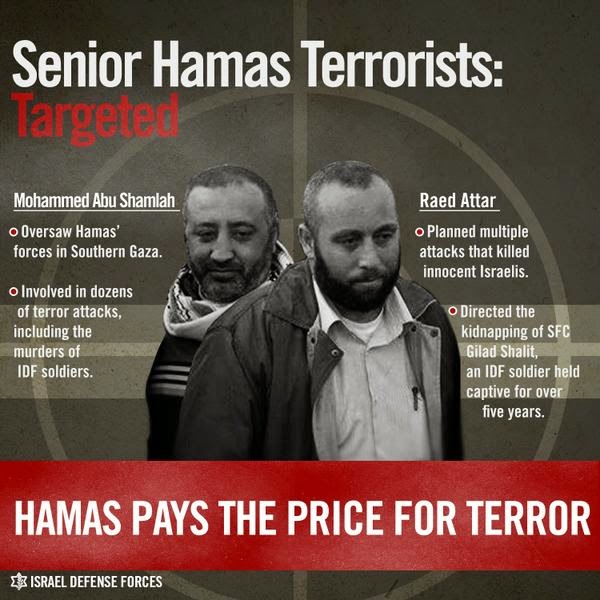 Abu Shamaleh and al-Attar were said to have played central roles in the abduction of IDF soldier Gilad Shalit and in other high-profile attacks against Israelis.

Shalit was released in 2011 as part of a prisoner swap that freed over 1,000 Palestinian prisoners, including at least one believed to have been involved in the killing of three Israeli teens by a West Bank Hamas cell in June. That attack precipitated the most recent round of fighting between Israel and Hamas.

The Shin Bet also named al-Attar as one of the architects of Hamas’s offensive tunnel operations in southern Gaza and as the head of the division that killed Israeli soldier Lt. Hadar Goldin while attempting to kidnap him. He was also allegedly responsible for smuggling weapons into Gaza from Sinai.

Barhoum, also killed in the strike, was a senior Hamas operative in Rafah responsible for smuggling weapons into Gaza from neighboring Egypt, Israel said.

And then there is Mohammed Deif, whose death the day before has yet to be confirmed by Hamas.

Deif has emerged as a key leader inside Gaza blocking ceasefire efforts and extending the war. On July 29 he personally committed - via a prerecorded message - to extending the war until all of Hamas's demands were met.


As Israel presses forward with its ground offensive, Deif is also viewed by some Israeli military analysts as a key obstacle to a negotiated end to the conflict. Al-Qassam Brigades fighters  attacked Israeli soldiers and, according to Israel’s military, abducted an officer —shattering a 72-hour humanitarian truce brokered by the United States and the United Nations. Early  morning, Israel’s military said the officer was killed in battle. The attack and other cease-fire violations by Hamas reflect divisions between the organization’s political and military wings, with the latter wielding greater influence, analysts said.“The decision-maker in Hamas is Mohammed Deif, leader of the military wing, and he is against the cease-fire because he believes every day they continue to fight is another achievement for them,” said retired Gen. Giora Eiland, a former Israeli national security adviser.


Here are some key facts on Mohammed Deif and why he was targeted by Israel
Hat tip: The Israel Project


If you found this post interesting or informative, please