“v'samachta bechagecha”: and you shall rejoice in your festival.  This is it, Sukkot, our season of rejoicing.  My very favorite holiday.  The spirit is in the air, here in Jerusalem.  I look forward to meals in the Sukkah (much larger than the illustration here!), and sleeping in the Sukkah with my grandchildren. 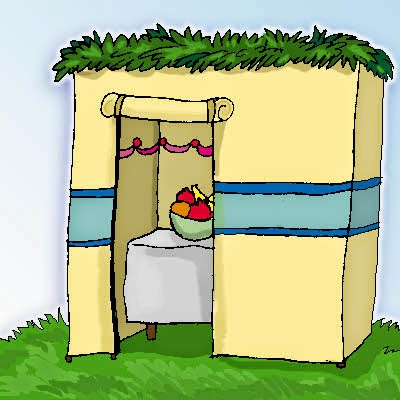 And blessings over the lulav and etrog.

Sukkot starts tomorrow night, and I will post only very erratically, if at all, during the coming eight-day period.  The older I get, and the worse the world seems, the more I understand how important are these moments of joy.  To all celebrating, I wish a Chag Sameach.
~~~~~~~~~~

The Legal Grounds Campaign, which I co-chair with Jeff Daube, had to slow down during the recent war with Hamas.  But we are ready to gear up again after the holiday and we believe there is now a window of opportunity for effect work.
Our ultimate goal of getting the government of Israel to speak in one voice, providing consistent messages to the Israeli public and the international community about our legal  grounds – and then adjusting policies so that they reflect these rights – has not changed.  We believe this is critical to Israel’s future.
Until how we’ve been working in the Knesset.  We are convinced there is still more work to be done there – bringing MKs on board to speak out about Israel’s rights - before we to the next stage.
It is important to emphasize: There are no magic bullets.  We are engaged in a process to turn the situation around.  Little by little.
I have already been in touch with some of you directly.  If you would like to know more about this campaign – what we’ve accomplished to date and where we are headed – or if you are interested in helping, financially or otherwise, please write to me (and put “Legal Grounds Campaign” in the subject line).
~~~~~~~~~~
There is, as always, an unending number of subjects to be discussed.  I will touch here upon just a few of the most critical.
The other day, the new government of Sweden declared intention of recognizing the Palestinian Authority as a “state.”  From the perspective of customary international law, this does not work.  For an entity to be defined as a state, it must:

Clearly, the Palestinian Authority has multiple problems fulfilling these criteria.  The whole matter of government control is very complex in this situation.  One Palestinian Authority as a unity government?  Or two authorities, one in Judea and Samaria and the other in Gaza, no matter how it is papered over?  Because of this complexity, there is confusion over what population it has.
But most significant is the issue of a defined territory over which it exercises control.  Were Abbas seeking to declare a state on the area that the PA now administers in Judea and Samaria, that would be one thing. But he is defining his state as encompassing everything over the Green Line (the 1949 armistice line, sometimes called the 1967 “border”), which enfolds all of eastern Jerusalem as well a host of Jewish communities.  He is not in control of this area and never will be.

~~~~~~~~~~
Then, there is yet another problem.  The PLO is obligated to a final status for the PA via the Oslo Accords, which call for negotiations.  European nations profess support for Oslo, but unilateral recognition of a state sabotages the process.
I will note here that Oslo does not specifically define a sovereign Palestinian state as the end goal of negotiations.
What is more, the General Assembly resolution that accorded the PA the status of a non-voting member of that body did not legally confer statehood upon the PA either. The UN cannot confer statehood.
~~~~~~~~~~
Yet Sweden, for purely political reasons, declared itself prepared to “recognize” this “state” that does not exist.  The danger is that it could motivate other nations to do the same.  While this “state” still would not fulfill all of the traditional criteria, by some measures, a state is defined in part by the recognition of other nations. Thus is it imperative to nip this in the bud. Sweden hasn’t actually taken the step yet.
~~~~~~~~~~
Foreign Minister Avigdor Lieberman was furious about Sweden’s announced intentions, and the Swedish ambassador to Israel was summoned for a reprimand.
http://www.ynetnews.com/articles/0,7340,L-4578329,00.html
Swedish prime minister Stephen Lofven was apparently startled by the reaction his announcement (during his inauguration speech, yet) elicited, and has backtracked a bit. Now he has explained that he is friends with both parties and was not trying to attack Israel.  He was trying to help, because if the PA is recognized as a state it will advance the peace process.  Unmitigated nonsense.  Hopefully in the end this will not happen.
~~~~~~~~~~
Sweden’s announcement stimulated similar talk in London. But in England this was not expected to have legs.  If a vote were to be held in the parliament, it would be purely “symbolic.”
~~~~~~~~~~
Now our eyes are on the north, where the situation is enormously unstable.  (Actually, the situation is unstable everywhere, but this area is considered most worrisome.)
On Sunday, a small group of Lebanese soldiers moved across the border from Lebanon into Israel.  The IDF shot at them and one soldier was lightly wounded; they all turned back into Lebanon.
At that point UNIFIL – the “peace keeping” UN troops in Lebanon – got involved, and had some harsh words for the shooting of the Lebanese soldier.  This struck me as ironic but not terribly surprising: For us they have reprimands. But this force that was supposed to keep Hezbollah from being re-armed after the 2006 Lebanon war totally failed in its mandated mission, as Hezbollah now has some 100,000 rockets.
~~~~~~~~~~
The concern being voiced here is that there has been a shift in the situation, with the Lebanese army and Hezbollah cooperating. In theory this was not supposed to happen. As far as I know, it has not happened overtly until now.  Although I will note that UNIFIL works under the direction of the Lebanese army.  The thinking is that this group of Lebanese soldiers was actually a cell intent on a terrorist attack.
http://www.jpost.com/Arab-Israeli-Conflict/Report-Concerns-mount-that-Hezbollah-Lebanese-army-could-cooperate-against-Israel-378138
~~~~~~~~~~
Repeatedly over the last several months, I have read reports that Hezbollah, which is headquartered in Lebanon, was not likely to turn its sights on Israel, as it was mired down in the Syrian civil war, where it had been depleted by the loss of hundreds of troops.  This is what I have been reporting.
But now there is a new assessment: Hezbollah has actually gained strength as the result of experience fighting in Syria: It has greater confidence and has new offensive capabilities.
The IDF has thus made “dramatic changes” in its plans to defend the north of Israel in all eventualities.
While no war with Hezbollah is expected in the immediate future, it is expected that such a war will come and it will be two-pronged.  There will be aerial attack by rockets and missiles that are far more sophisticated than anything Hamas has. And there will infiltration into the north of Israel, in the Galil, with an attempt to seize areas or communities.
There is confidence in the IDF that Hezbollah forces that entered Israel’s north could be repelled in short order.  The far greater concern is those rockets and missiles.
I’ve heard it said many times by our military commanders and defense personnel that a war with Hezbollah would not be like a war with Hamas, and I can only pray that from the perspective of our defense they mean it.  We would have to preempt. Hezbollah follows exactly the same pattern of hiding rockets in civilian areas. But in Lebanon, there would be no time to warn civilians to move out of the way.  Attacks on sites where the key weaponry is stored would have to be swift and massive to prevent launching of those destructive rockets.  In order to defend ourselves we would have to concentrate on speedily eliminating the threat, rather than worrying about accusations from the world community or a count of how many civilians got in the way.
~~~~~~~~~~
And while we are talking about the north, there is also the presence of radical jihadists on the other side of the Golan, in Syria, who at some point in the future may decide to move down into Israel.  Different groups are represented there, none nearly as strong as Hezbollah or armed with rockets as Hezbollah is, but requiring extreme vigilance all the same.
~~~~~~~~~~
All of this, I must add, provides strong rationale for not having gone into Gaza to totally take down Hamas. This would have drawn on too much of our resources, occupied too many of our soldiers – all of which may, on short notice, be needed elsewhere.
~~~~~~~~~~
On Sunday, a powerful blast tore into Iran's military facility at Parchin. At least two people were killed. It is not yet known if this explosion was the result of sabotage or a work accident.  But such news is always welcome.  I will not know anything more before Sukkot begins. But after the holiday, there is a great deal to write about concerning Iran.

~~~~~~~~~~
Tensions remain high between Netanyahu and Obama, over the issue (which is a non-issue!) of our plans to build in eastern Jerusalem.
What is pleasing from the perspective here is that Netanyahu has about had it – he’s standing strong, unapologetically.
~~~~~~~~~~
An interview of Prime Minister Netanyahu by Dovid Efune appears in the Algemeiner.  In it he explains that his determination not to transfer any territory to the PA without extensive security arrangements (read: the continuing presence of the IDF inside this territory) has “only become firmer,” in light of current situations.
“We don’t just hand over territory, close our eyes and hope for the best.”
http://www.algemeiner.com/2014/10/06/netanyahu-says-stance-on-security-requirements-has-become-%e2%80%98firmer%e2%80%99-%e2%80%98we-don%e2%80%99t-just-hand-over-territory-close-our-eyes-and-hope-for-the-best%e2%80%99-interview/
~~~~~~~~~~
This non-appeasing stance by our prime minster is most welcome.  He is couching his position in security terms, and indeed the concerns in this regard are very real:
"’[Some] have said Hamas wants to create an Islamic emirate in Gaza,’ says senior Hamas official Mahmoud al-Zahar... ‘We won't do that, but we will build an Islamic state in Palestine, all of Palestine.’

“If Hamas manages to establish a foothold in the West Bank, it would be able to wipe out Israel and establish an Islamic state in its stead, senior Hamas official Mahmoud al-Zahar told Palestinian news outlet Al-Ayyam on Wednesday.” (Emphasis added)

http://www.israelhayom.com/site/newsletter_article.php?id=20609
What this indicates is not only that giving a state to Abbas would be incredibly dangerous and foolish, but that the notion of a unity government is a farce, a pretense: If Hamas and Fatah were truly united, Hamas would not be talking this way.
~~~~~~~~~~
But in the end, Netanyahu’s concerns translate to: No two-state solution, folks.  Elsewhere I read that Netanyahu says the definition of “sovereignty” would have to change with regard to what was meant by a “sovereign” Palestinian state.
Abbas will not have this. But there it stands.  The world is going to be angry at us and we had better learn to live with it.  To give the world what it wants of us would be suicide.
A very good time for making our case about our rights in the land with full vigor.


Technorati Tag: Israel and Sweden and Hezbollah and Iran.