Does Kerry Think that 18 Million Muslim Refugees Are Irrelevant to ISIS? 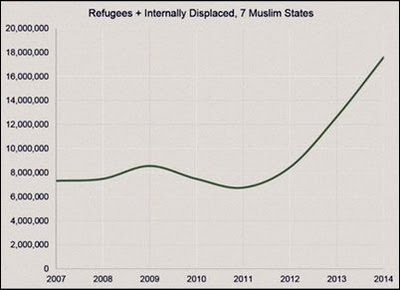 There are now nearly 18 million refugees and internally displaced persons in seven Muslim countries (Afghanistan, Iraq, Libya, Pakistan, Somalia, Syria, and Yemen), up from slightly over 7 million in 2011, according to the UN. That doesn't count more than 2.5 million Afghani refugees from the continuing war in their country. Much of the population of Syria has left their homes, including 3 million who have left the country due to the civil war and an additional 8 million internally displaced.

That is cause for desperation: unprecedented numbers of people have been torn from traditional society and driven from their homes, many with little but the clothes on their backs. There are millions of young men in the Muslim world sitting in refugee camps with nothing to do, nowhere to go back to, and nothing to look forward to. And there are tens of millions more watching their misery with outrage. Never has an extremist movement had so many frustrated and footloose young men in its prospective recruitment pool.

Israel has nothing whatever to do with any of this suffering. It is all the result of social and political disintegration in the Muslim world itself. To blame ISIS' recruitment of young Muslims on the refugee problem of 1948, as Secretary of State John Kerry did last week, boggles the imagination. It is one thing to ignore the elephant in the parlor, and another to pretend it is not there when it is standing on one's toe.

To be fair, the secretary of State did not assert as a matter of fact or analysis that the Israeli-Palestinian issue was the cause of rising extremism. What he said was this:

"As I went around and met with people in the course of our discussions about the [anti-Islamic State] coalition … there wasn't a leader I met with in the region who didn't raise with me spontaneously the need to try to get peace between Israel and the Palestinians, because it was a cause of recruitment and of street anger and agitation that they felt they had to respond to. And people need to understand the connection of that. And it has something to do with humiliation and denial and absence of dignity, and Eid celebrates the opposite of all of that."

It is quite possible to imagine that some leaders in the region cited the Israel-Palestine issue. They face social unraveling on a scale not seen in the region since the Mongol invasion. They are submerged by a human tsunami, and might as well blame the Jews. Or the bicycle riders.
David P. Goldman is Senior Fellow at the London Center for Policy Research and Wax Family Writing Fellow at the Middle East Forum.