...on the unanimous vote in the Senate Foreign Relations Committee to advance the bill, sponsored by Senator Bob Corker (R-TN), which would give Congress the right to review the deal currently being worked out with Iran.

Yes, as I wrote last week, it is a step in the right direction, as Senators are beginning to insist upon their right to be involved in this critical deal.  But it falls short in a very critical respect.

“...By treating it as a normal act of legislation, the president will be able to veto the measure. That sets up a veto override effort that will force Iran deal critics to get to 67 votes, a veto-proof majority. If that sounds reasonable to you, remember that in doing so the bill creates what is, in effect, a reverse treaty ratification mechanism. Instead of the president needing a two-thirds majority to enact the most significant foreign treaty the United States has signed in more than a generation, he will need only one-third of the Senate plus one to get his way.

“By allowing pro-Israel Democrats a free pass to vote for Corker-Menendez the president is giving them a way to say they voted to restrain the president before also granting them a path to back him by either voting for the deal or failing to vote to override the president’s veto. That gives plenty of room for inveterate schemers such as Democratic Senate leader-in-waiting Chuck Schumer to make sure the president gets his 34 votes while giving some Democrats, including perhaps himself, impunity to vote against him.

“What has happened here is that despite furious effort and hard legislative work all critics of Obama’s pursuit of détente with Iran have accomplished is to allow him the opportunity to legally make a historic and disgraceful act of betrayal of Western security with the least possible support. They may have had no better options and I’ll concede an ineffectual vote on an Iran deal might be better than no deal at all, but please spare me the praise for Corker’s bipartisanship or the chortles about how the White House was beaten. What happened yesterday actually advanced the chances for Iran appeasement. And that’s nothing to celebrate.”

Keith Koffler, in his article, “The Corker Cave-in,” agrees with this analysis and takes it one step further (emphasis added):

“’The Unified States Senate just capitulated to Obama,’ radio host and Constitutional scholar Mark Levin said Tuesday night. ‘The Unified States Senate just rewrote the Treaty Provision of the Constitution.’
“...It’s true, international agreements have increasingly, over the decades, been done by executive action. But an agreement such as this – negotiated over the course of years and involving nuclear weapons for our most pernicious adversary and therefore the possible destruction of the United States – must by its nature qualify as a treaty under the Constitution, or there is no Constitution at all.

“The Founders are very clear on the need for a co-equal role in such critical matters for the Senate, which was originally entrusted not just with approving treaties, but helping negotiate them too...

”With the Corker bill, he [Obama] now has Congress in his pocket as he joins Iran in shredding the Constitution over a Swiss negotiating table. And in ten to 15 years, when Iran conducts its first nuclear test, Congress will have had a ‘role’ in the tragedy.”

http://www.whitehousedossier.com/2015/04/15/corker-cavein/
~~~~~~~~~~
Let’s look briefly at some other commentary about the Iran deal, and some of the latest news updates:

“Iran could collect up to $50 billion in oil revenue if sanctions are lifted, according to congressional officials briefed by the Obama administration.

“If negotiators are successful in brokering a deal with Iran this summer to suspend its nuclear program, officials say the country could receive between $30 billion and $50 billion after signing an agreement, the Wall Street Journal reported....”

“Unfreezing billions of dollars worth of Iranian assets...will have the effect of exacerbating Iran’s ‘systematic, 35-year campaign of regional meddling, destabilization, and extension of … influence’ that threatens the Middle East.”

“As UN nuclear inspectors arrived in Tehran [last] Wednesday, Iranian President Hassan Rouhani said the Islamic Republic will not accept a comprehensive nuclear deal with major powers if all sanctions imposed on Tehran are not lifted.

“’If there is no end to sanctions, there will not be an agreement,’ Rouhani said in a televised speech in the northern Iranian city of Rasht.

"’The end of these negotiations and a signed deal must include a declaration of cancelling the oppressive sanctions on the great nation of Iran.’"

And – as you grapple with this horrendous situation - factor this in, as well (emphasis added):
“Even if Congress rejects his final Iranian nuclear deal, President Barack Obama could use his executive pen to offer Tehran a hefty portion of sanctions relief on his own. ...

“The president could suspend some existing US sanctions with his waiver authority. He could issue new orders to permit financial transactions that otherwise are banned under current law. And he could simply take certain Iranian entities, including nearly two dozen Iranian banks, off US target lists, meaning they no longer would be subject to sanctions.

“Only Congress can terminate its legislative sanctions. And those are some of the toughest penalties against Iran because they target its energy sector, central bank and key segments of its economy. But experts say Obama can neutralize the effect of some of those sanctions, too, and work with the Europeans to neutralize others....

“Says Tyler Cullis, legal fellow at the National Iranian American Council, which favors an agreement: ‘Some have expressed doubt whether the president can provide Iran significant sanctions relief solely on the basis of his own authority. Such doubt should be put to rest.’

“He said the president ‘could almost gut’ an entire segment of sanctions...”

“North Korea supplied several shipments of missile components to Iran during recent nuclear talks and the transfers appear to violate United Nations sanctions on both countries, according to U.S. intelligence officials.” (Emphasis added)

“A senior commander in Iran's Revolutionary Guard said Sunday that inspectors would be barred from military sites under any nuclear agreement with world powers.

“Gen. Hossein Salami, the Guard's deputy leader, said on state TV that allowing the foreign inspection of military sites is tantamount to ‘selling out.’

"’We will respond with hot lead [bullets] to those who speak of it,’ Salami said. ‘Iran will not become a paradise for spies. We will not roll out the red carpet for the enemy.’"

http://www.dailystar.com.lb/News/Middle-East/2015/Apr-19/294948-iran-guard-rejects-inspection-of-military-sites.ashx
Just how much will Obama tolerate?  Is this a deal at any cost, so that he can claim a deal?
~~~~~~~~~~
This is heavy information, as I am well aware, my friends.  But we dare not ignore it.
~~~~~~~~~~
And now for the good news, which we so badly need. Today I include a couple of sites – the first and last items - that may be of interest to tourists.
Israel’s Beit Guvrin-Maresha National Park has earned its certification as a UNESCO World Heritage site.  Located in lowland south of Beit Shemesh and east of Kiryat Gat, the Park – which is five sq. kilometers - is within a larger area referred to as the “land of the caves.”
http://www.jpost.com/Israel-News/Israels-Beit-Guvrin-celebrated-as-UNESCO-World-Heritage-site-398074
The park contains thousands of ancient underground man-made caves, and also encompasses the ruins of Maresha, an important town of Judah of 2,000 years ago.  Here you see the “Bell Cave” and below it, a cave with dovecotes. 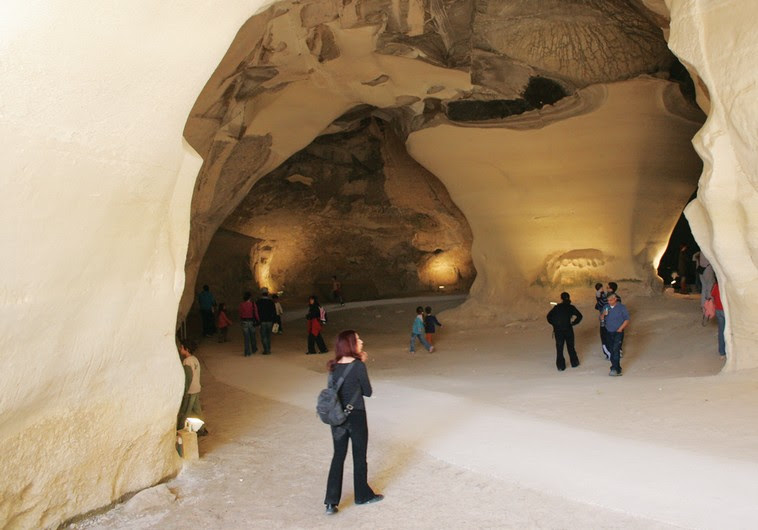 Credit: S. Aronson
~~~~~~~~~~
In the face of its lowest levels of available water ever, Brazil has hosted a delegation of 13 Israeli water companies who came to help the Brazilians address their water crisis.
http://israelnewtech.com/2015/03/israeli-water-delegation-on-mission-to-help-brazil-solve-water-crisis/
~~~~~~~~~~
Professor Zvi Bentwich, 78, a member of Ben-Gurion University of the Negev’s department of microbiology, immunology and genetics, heads the university’s Center for Emerging Diseases, Tropical Diseases and AIDS.  In the 1990s, he did groundbreaking research that uncovered a link between intestinal worms and immune system deficiencies – deficiencies that contribute to Africa’s AIDS and tuberculosis epidemics.
Now the professor has been named the recipient of a grant from the Bill & Melinda Gates Foundation for his project in Ethiopia to wipe out parasitic worm infections.
http://www.israel21c.org/news/gates-grant-for-public-health-hero/ 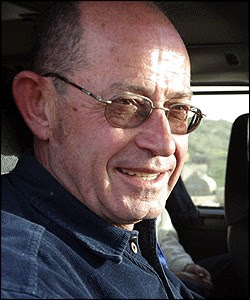 “Can you name 15 varieties of cherry tomatoes? What about four types of carrots? Have you ever tasted an Uri Kaduri orange? And do you know the difference between the seven varieties of mint leaves?

“A three-hour visit to the Salad Trail, a unique touch-and-taste farm in the Hevel Habesor region of the northern Negev, will turn you into an expert grower for the day.

“Pick-your-own produce farms are commonplace. But agronomist Uri Alon (pictured below) has upped the ante with his complete senses-and-learning experience at his farm in the northern Negev.

“’If you want to see how the real vegetables grow, and taste the best vegetables in the world, that’s reason enough to come visit,‘ Alon, the brains behind this blossoming oasis in the middle of the sandy desert, tells ISRAEL21c.

“’If you want to see the real Israel and see how you can take a desert and change it and make it bloom, it’s enough reason to drive 1.5 hours from Tel Aviv.’” 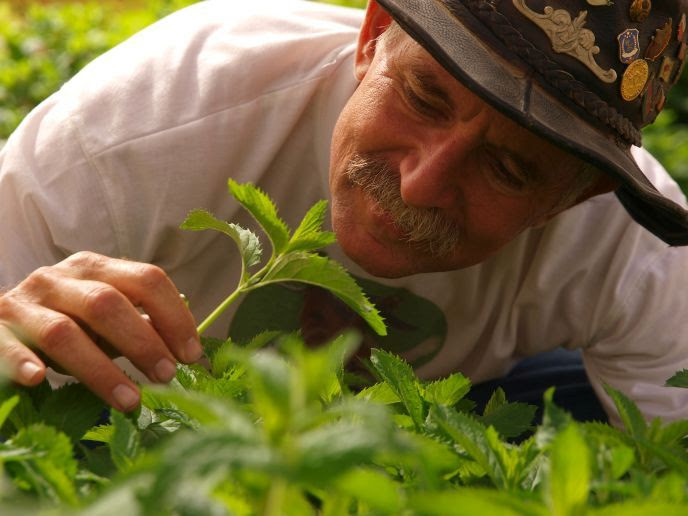 If it is reproduced and emphasis is added, the fact that it has been added must be noted.
http://arlenefromisrael.squarespace.com/current-postings/2015/4/19/april-19-2015-the-bottom-line.html


Technorati Tag: Israel and Iran and Obama and Corker.