The following by David P. Goldman is reposted here with permission of The Middle East Forum: 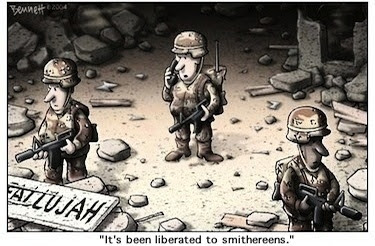 Riddle me this, fellow Republicans. An NBC survey April 9 reports that a huge majority (70%) of Americans doubt that Iran will abide by any agreement to limit its nuclear arms–but a majority (54%) still think Obama will do a better job than the Republicans in dealing with Iran!


A majority of Americans – 54 percent – trust Barack Obama to do a better job handling an agreement with Iran over its nuclear program, compared to 42 percent who say they trust the Republicans in Congress. But nearly 7 in 10 Americans say that Iran is not likely to abide by the agreement that has been reached.

Fifty-three percent think Iranian nukes are a "major threat," and only 37% think they are a "minor threat." Most Americans, in short, think Iran is a major threat to American security and think that Obama's nuclear deal is a joke–but they still want Obama in charge of the negotiations, not us.

Maybe NBC made the numbers up. Maybe a proofreader got the numbers reversed. And maybe pigs will sprout wings.

There is a much simpler explanation: Most Americans don't trust Republicans on matters of war and peace. Not after the nation-building disasters in Iraq and Afghanistan, that is. Why should they trust us? Our leadership has never admitted it made a mistake. Sen. Ted Cruz, to be sure, had the gumption last fall to say that "we got too involved in nation-building" and that "we should not be trying to turn Iraq into Switzerland"–and was excoriated for his trouble by the Bushies. The Republican mainstream is too busy trying to defend the Bush record to address the distrust of American voters.

One gets weary and grows shrill sounding the same note for a decade. I wish the problem would go away. A couple of weeks ago a friend who served in senior defense positions in the Bush administration remonstrated, "Why do we have to worry about what mistakes were made back then?" The American public doesn't remember a lot, but it does remember the disruption of millions of lives after the deployment of 2.6 million Americans in Iraq and Afghanistan–not to mention 6,000 dead, 52,000 wounded in action, and hundreds of thousands of other injuries.

That's why Obama still has the upper hand, and is likely to succeed in selling out American and allied interests to the mullahs. His trump card is the repeated statement: "The alternative is war." That may or may not be true; over at Asia Times' "Chatham House Rules" blog, several former senior officials of the Reagan administration are debating the merits of a military strike. But an air strike on Iran's nuclear facilities surely is an option.

Former Israeli prime minister Ehud Barak had it exactly right: an airstrike on Iran's nuclear facilities isn't war. It's half a night's work, a pinpoint operation comparable to the killing of Osama bin Laden. But our leaders won't say this, because the prospect of military force conjures up fears of a million Americans going back to war.

Republicans need a clear and simple policy about the use of force: We will use force only when we and our close allies are under threat. We will use the kind of force that least exposes Americans to harm. We will not sacrifice the time, let alone the lives, of American soldiers to fix the problems of other countries. I recommend that Republican candidates read Angelo Codevilla's 2014 book To Make and Keep the Peace, and then ask Prof. Codevilla to design a bumper sticker for them.

It's hard to know whether to laugh or cry, or both, and in what order. Here we have the least competent president in American history bungling a decisive foreign policy matter in full view of the public, and bungling so badly that 7 out of 10 Americans think that any agreement we make with Iran will be a piece of garbage–and Americans still want Obama to handle the negotiations! That is not only injurious. It is humiliating.

How much more humiliation at the hands of the public do we need before we straighten out and fly right?

David P. Goldman is Senior Fellow at the London Center for Policy Research and Wax Family Writing Fellow at the Middle East Forum.


Technorati Tag: Republicans and Iran and Iraq and Afghanistan.