The blog Life Inside a Chicken has his own version of "You know you're a Zionist when"--a rehash of a variety of myths, slanders and wasted imagination accusing "Zionists" of any of a number of things.

With a different perspective I offer my point-by-point response, illustrating how you really know you're a Zionist.

You truly know you're a Zionist when...


o Due to a scarcity of knowledge, common sense--or both--people use the terms Jews and Zionists.

o Everybody wanted to historically kick you out of their empire for obvious reasons--such as take advantage of what you have to offer and then get rid of you.

o You seek refuge in a land that has never served as a homeland for anyone else except the Jews, ask to share it since there is so much unused space, and then when those Arabs declare war threatening to destroy you--and fail--they whine and claim the world has an obligation to financially support them.

o You show pride in your past and current accomplishments--and your pride in the unbroken chain of Jews living in the land even after the destruction of the Second Temple.

o People conveniently claim that being a Jew is not an ethnicity but only based on religious practice.

o People claim they "justifiably criticize" you while applying double standards and hate-filled rhetoric and then whine when you call them on it.

o People revel in calling you Nazis when you apply international law to defend yourself from Arab terrorists.

o You have nuclear weapons for self-defense without ever threatening to use them, but when Iran is on the verge of getting them while claiming they will wipe Israel off the map, the world is lackadaisical in responding to that threat while demanding Israel bring in the same inspectors that Iran refuse access to.

o Superpowers like Russian and China use their veto to let Arabs off the hook so they can continue to kill each other--not to mention the Arab control of the UN Human Rights Council where the focus is on Israel while Arab vs Arab violence in Sudan and Syria is ignored.

o You still have people using The Protocols of the Elder of Zion, while priding themselves that they are making insightful comments.

o You are accused of violating international law when you establish an embargo to prevent weapons allowing terrorists to bomb your civilians. Then, when you defend your right to enforce that embargo, you are attacked by people trying to kill you--and condemned from defending yourself.

o You can still prosper consistently by following sound economic measures--some painful--while those who don't, deal with the consequences. (That would includes the Arab countries that lecture the rest of the world how Sharia law brings financial stability.)

o People make the same reused accusations over and over while claiming they are facts.

Example: you use false rigged maps like this one 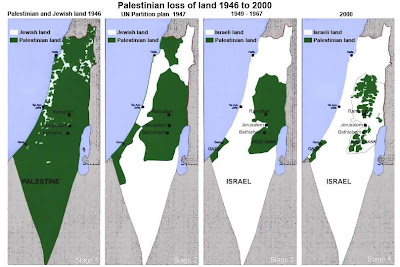 which are so full of distortions that it requires a blog post to go through and debunk them all.