Much is being made of the anti-Muhammed video, to the extent that the initial attack on the US embassies in Cairo and Benghazi, the murder of US ambassador Chris Stevens and his staff -- and the continuing wave of anti-US protests are all being blamed on that video.

Thus the chant of "Obama, we are all Osama" is not supposed to be a reflection of anti-US sentiment, but just a reaction to an insult to Muhammed.

But if these protests are in fact due only to the video and are not a reaction to the US in general and the Obama administration in particular -- why is it that Muslims were already chanting "Obama, we are all Osama" 4 months ago back in May?

The fact is the Muslim world has been less than pleased with Obama for a while.

Daniel Pipes documented Obama's declining approval rating in a post back in 2010, and has been updating that post ever since:

Here is the post by Daniel Pipes, reposted here with permission:

Barack Obama entered with high hopes of improving the U.S. image among Muslims worldwide, hauling out his middle name, giving his first interview as president to Al-Arabiya television, quoting hadith, giving major speeches in Istanbul and Cairo, and talking ceaselessly of "respect" for Muslims. Where has this got him?

The Gallup Poll conducted face-to-face interviews with 1,000 adults aged 15 and older in each of Mauritania, Algeria, Egypt, the Palestinian Territories, Lebanon, and Iraq (a curious collection of places). It asked the same question once in 2008, twice in 2009, and now for the first of two times in 2010: "Do you approve or disapprove of the job performance of the leadership of the United States?" The margin of error ranges from ±3.1 percent to ±3.9 percent. 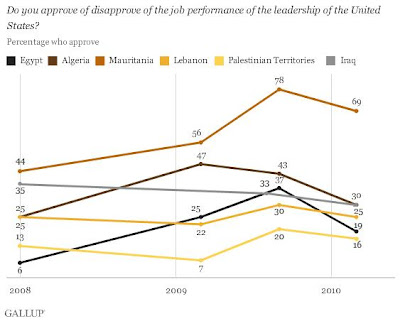 Also noteworthy is that Obama's current standing has declined among all six of the populations from what it was in mid-2009. The smallest drop (3 percent) was in Iraq and the largest (18 percent) in Egypt.
Comments: (1) These polls register a highly unimpressive showing for someone who placed so much emphasis on improving U.S. standing among Muslims. (2) The graph of Arabic-speakers' attitudes toward Obama differs from that of Americans' views: the former went up and then down, while the latter went down and then flattened out. That said, both at present share a downward trend. (3) Fouad Ajami already anticipated this decline in November 2009, when he wrote:


'He talks too much," a Saudi academic in Jeddah, who had once been smitten with Barack Obama, recently observed to me of America's 44th president. He has wearied of Mr. Obama and now does not bother with the Obama oratory.

He is hardly alone, this academic. In the endless chatter of this region, and in the commentaries offered by the press, the theme is one of disappointment. In the Arab-Islamic world, Barack Obama has come down to earth.

He has not made the world anew, history did not bend to his will, the Indians and Pakistanis have been told that the matter of Kashmir is theirs to resolve, the Israeli-Palestinian conflict is the same intractable clash of two irreconcilable nationalisms, and the theocrats in Iran have not "unclenched their fist," nor have they abandoned their nuclear quest.

There is little Mr. Obama can do about this disenchantment. He can't journey to Turkey to tell its Islamist leaders and political class that a decade of anti-American scapegoating is all forgiven and was the product of American policies—he has already done that. He can't journey to Cairo to tell the fabled "Arab street" that the Iraq war was a wasted war of choice, and that America earned the malice that came its way from Arab lands—he has already done that as well. He can't tell Muslims that America is not at war with Islam—he, like his predecessor, has said that time and again.


The last pillar of President Barack Obama's Middle East policy, his alleged popularity in the region, has gone bye-bye. All the apologies, distancing from Israel, the Cairo speech, the Istanbul speech, the engagements with Syria and Iran, the ban on using the word "Islamism," and all the other apparatus of the new, non-strategic strategy have availed him—and U.S. interests—not.

Aug. 5, 2010 update: The Brookings Institution and Zogby International today issued a "2010 Arab Public Opinion Poll" covering Egypt, Jordan, Lebanon, Morocco, Saudi Arabia, and UAE. It goes further than prior surveys in documenting the collapse of Arab support for Obama.
With dreary predictability and perfect-pitch obsession, the conductor of this poll, Shibley Telhami, commented that "the data leaves little doubt that the deciding factor in the shift of opinion toward the Obama administration is disappointment on the Israeli-Palestinian issue."


in key Arab nations and in other predominantly Muslim countries, views of the U.S. remain negative, as they have been for nearly a decade. Indeed, in Jordan, Turkey and Pakidstan, views are even more negative than they were one year ago. With the exception of Indonesia, Obama remains unpopular in the Muslim nations polled, and most disapprove of the way he has handled calls for political change roiling the Middle East. Moreover, many of the concerns that have driven animosity toward the U.S. in recent years are still present – a perception that the U.S. acts unilaterally, opposition to the war on terror, and fears of America as a military threat.

And in countries such as Jordan, Lebanon, and Pakistan, most say their own governments cooperate too much with the U.S.

As the accompanying charts indicate, other than a microscopic up-tick in favorability toward the United States among Palestinians, regard for both the country and Obama have declined among Muslims everywhere since 2009, with Turkish views toward Obama having trended the most negatively.

July 13, 2011 update: Two months later and Zogby International finds an even more dramatic collapse in favorable attitudes toward the United States in six Arabic-speaking countries. In five of the six, Obama initially scored much higher than Bush and in five of the six, a huge fall off took place between 2009 and 2011. Morocco and Egypt are particularly dramatic: in both countries, Obama more than doubled Bush's favorable, then his crashed to less than half of Bush's.


Aslo noteworthy: Recep Tayyip Erdoğan's Turkey has emerged as the most popular outside state.


May 27, 2012 update: Thousands of supporters of Ansar Al-Shari'a in Tunisia (AST), an extreme Salafi group, rallied in Kairouan, Tunisia, on May 20, MEMRI reports. A video clip includes the crowd yelling out: "Obama, Obama, we are all Osama" and the speaker referring to "Obama the ape." 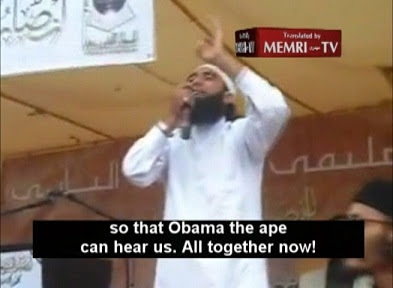 Email ThisBlogThis!Share to TwitterShare to FacebookShare to Pinterest
Labels: The Disaster of Obama's Policy In The Middle East

The White House already spins this as a victory for democracy and self determination in the Mideast. Arson and murder are the White House version of the Muslim Bill of Rights.

I have not seen this being spun by the Obama administration as a victory for Democracy -- only that the video is the sole cause.

As far as self-determination, the "Arab Spring" has not shaped up that way.

I saw quotes of Obama praising the Arab Spring last year -- specifically in Cairo and Benghazi.