Are The Saudis Now Accommodating Iran Under US Pressure? 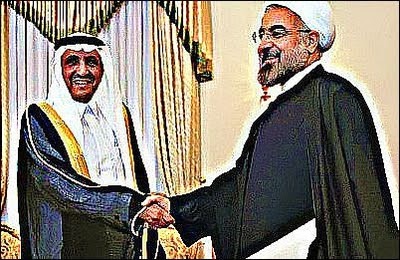 A number of recent Saudi moves and official statements have led to speculation regarding a possible shift on the kingdom's stance toward Iran.

The Saudis appear to be moving, at least on a declarative level, away from a position according to which Iranian ambitions are a threat to be resisted – toward an attempt to accommodate Tehran.

Shehri demonstrably kissed Rafsanjani on the forehead during the meeting. In addition to displaying the depth of the ambassador's patriotism, this act was held by some commentators to portend a renewed Saudi determination to set relations with Iran on a new footing.

The second was the Saudi announcement of an invitation to Iranian Foreign Minister Mohammad Javad Zarif to visit the kingdom.

The third element that many analysts have pointed to in asserting a change in the direction of Saudi policy is the recent replacement of Prince Bandar bin Sultan from his position as head of the Saudi intelligence services.
Bandar had been associated with a proactive Saudi policy in Syria, Lebanon, Bahrain and other points of Saudi-Iranian tension. His replacement by Muhammad Bin Nayef was seen as portending a less activist regional policy.
This was accompanied by the replacement of deputy defense minister Salman bin Sultan. Bin Sultan is the half-brother of Bandar, and like him was associated with a policy of activist resistance to Iran's regional advance.

These Saudi gestures should be placed in a context of clear US pressure on their Gulf clients to get "on board" with Washington's regional diplomacy, close to the center of which appears to be a desire to "flip" Iran from foe to friend.

According to a report on the Intelligence Online website, both US President Barack Obama and Secretary of Defense Chuck Hagel stressed this matter in their recent visit to the Gulf. Obama reportedly raised the matter in his meeting with King Abdullah bin Abdulaziz.

As the nuclear negotiations with Tehran stumble on, and Iran's clients hold their own or emerge victorious in Lebanon, Syria and Iraq, the US apparently remains convinced of its strategy to normalize relations with Tehran through meeting it halfway.

Saudia Arabia, along with Bahrain and the United Arab Emirates, has hitherto remained similarly convinced that Iranian ambitions cannot be accommodated, without Saudi and Western surrender of vital interests. It is for this reason that they have regarded the current US push for rapprochement with Tehran to be a fool's errand.

According to Intelligence Online, Gen. Khalifa bin Ahmad al-Khalifa, the Bahraini chief of staff, bluntly articulated the concerns of the Gulf Cooperation Council countries with regard to the Iranian threat and the current US response to it.

The Gulf countries, he said, were "profoundly concerned about Iran's ambitions to destabilize the region, via its sponsorship of terrorism from the shores of the Mediterranean to the provinces of southern Yemen… Your [US] intelligence services have proof of this terrorism enterprise. What are you doing to halt its spread?" Khalifa went on to accuse the US of "backing down" over Syria and letting President Bashar Assad's "chemical attacks go unpunished."

Gulf concerns are not hard to understand. The goal of ending the presence of foreign (i.e. US) forces in the Gulf is a core Iranian strategic objective. Tehran regards its own domination of the Persian Gulf as a "natural" state of affairs reflecting Iran's greater demographic and societal strength compared with the fragile, energy-rich Arab monarchies on the other side of the Gulf.

Iran has also shown skill and determination in pursuit of its goals further afield, over the last turbulent decade in the region.

How, then, to explain the Saudis' apparent about-face and attempt to get behind US policy? The Saudis are aware that the US remains the main physical guarantor of Gulf security, whatever the problems with its current strategy. Other Gulf countries are aware of this, too.

There are no indications that the current administration has any intention of reducing the US military presence of 35,000 personnel in the Gulf, including the Fifth Fleet and a number of advanced missile defense systems.

Indeed, Hagel went out of his way during his visit to the Gulf to stress the continued US commitment to this presence and to Gulf security, regardless of the differences over Iran policy.

It has also long been the contention of the most astute Gulf analysts that it would be mistaken to imagine that Saudi Arabia will constitute an unyielding bulwark to Iranian ambitions, if it becomes clear that the US and the West prefer to accommodate the Iranians.

The Saudi kingdom is simply too fragile an entity to play such a role. Rather, if Western weakness in the face of the Iranian advance becomes apparent, Riyadh is likely to accommodate itself to the new situation.

The shifting Saudi strategy in Syria – which over the last three years has gone from supporting Islamist and jihadi groups to seeking to offer limited support to the rebels, largely within the definitions and dictates of US policy – may offer a window into the current broader direction of Saudi policy toward Tehran.

This runs along clear lines of basic disagreement toward the regional strategy being pursued by the Obama administration, a pragmatic awareness of the need to appear to accommodate Washington's declared direction, and energetic efforts to prepare as best Riyadh can to cope with the challenges of a Middle East in which a continued Iranian advance seems to be a given.

Are these, on the evidence available, likely to produce a changed Saudi policy with regard to Iran? The answer is yes. Increased direct or mediated dialogue between the two is, at the very least, likely.

It may also be that the shift will produce concrete policy results in specific regional "files" of contention – such as Yemen, Lebanon or even Syria – as the Saudis seek to avoid confrontation with the advancing Iranian power.

The lesson of all this is that there is no simple regional substitute for US leadership in the effort to hold back the advance of Iran – both on the nuclear track and with regard to Tehran's broader regional ambitions, of which the nuclear drive constitutes a crucial component. The problem is that the current US administration is embarked on a course which is producing Iranian victories.

Saudi Arabia, because of perceived necessity, appears for now to be adjusting its own course to follow this path.
Jonathan Spyer is a senior research fellow at the Global Research in International Affairs (GLORIA) Center and a fellow at the Middle East Forum.