It took a long time in coming, but it’s very serious now.  The military action, called Operation Protective Edge, was announced in the wee hours of Tuesdaymorning.

As I write, well over 140 sites in Gaza have been hit by the Israeli Air Force and some 14 people have died, including an Hamas official, and some 80 have been injured.


But Hamas has apparently decided to go for broke and says it has no interest in a ceasefire.  The barrage of rockets has continued with some 70 launched today: Rocket alerts sounded in Tel Aviv, Givatayim, Gedera, Be'ersheva, Ashkelon, Ashdod, Ofakim, Merhavim, Ramat HaNegev, Eshkol and elsewhere.  In some instances, notably in the Tel Aviv area, the Iron Dome intercepted the rockets.  But the fact that rockets are now being aimed at Tel Aviv, a major population center at the heart of the country, is a mark of escalation by Hamas. 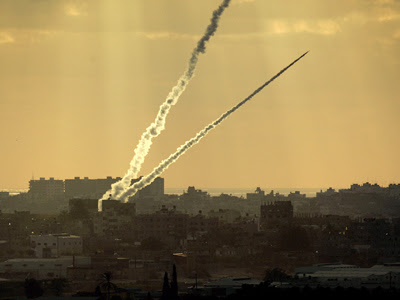 Forty-thousand reserve troops have now been called up for the Southern and Central Command.  They will replace regular army in places such as Judea and Samaria, allowing these troops to move to Gaza. The ground operation has not yet begun, but barring some incredible change in circumstances, it will start before long.

Reports are that Netanyahu has told the army, which says it’s ready for anything, to “take off its gloves.”
According to Interior Security Minister Yitzhak Aharonovich, “The IDF has a free hand to operate, within a set of predefined steps. The political echelon has given the IDF everything it has requested.” (Emphasis added)

The nation has been advised by several officials, including Netanyahu and Ya’alon, that this will not be a short operation of days. They are asking us for patience. Guidelines have been provided on how to act if a rocket warning sounds.  Hamas has rockets that can reach across the country, and cautions apply to all of the country.

There is the question now of what the final goals of this operation will be.  I am not certain if they are clearly defined within the top political and military echelon.
Netanyahu today said:

“...we must stand together as one -- united and sure of the justice of our cause. We are acting with determination and assertively to return the quiet, and we will continue to do so until the quiet is restored.”
But this is not sufficient.  It would allow Hamas, as has been pointed out here often enough, to continue to build its arsenal and to hit us again at a time of its choosing.

Chief of Staff Lt.-Gen. Benny Gantz has said something quite different (emphasis added):

“We will now activate all of our force and take all the time that is needed in various stages in order to reach victory.

"There may be surprises; there might be rocket fire here or a terror attack and difficulties there. We must be prepared for all possibilities...We must continue the mission, for as long as necessary... the public is resilient and stable. It trusts the military and expects it to act.

"We will accomplish goals against Hamas, hurt it badly, remove its capabilities, defend our civilians and our country, and we will exact from Hamas the full price for the strategic mistake that it has made."

There are those – notably Foreign Minister Avigdor Lieberman (head of Yisrael Beitenu) and MK Ze’ev Elkin (Likud), Chair of the Knesset Foreign Affairs and Defense Committee  - who are recommending we retake Gaza.

That it was a terrible error to have pulled out as PM Sharon did in 2005 is clear, and there is a great longing on the part of many to correct that painful mistake.  It would solve the problem of having rockets launched at our civilians by jihadists of any stripe, and it would prevent other radicals from assuming power if Hamas is brought down.

There are two downsides to this that immediately spring to mind, however. First, that it would require a protracted military campaign with a large number of casualties among our troops.  And then that Abbas would demand of the international community that it force us to turn Gaza over to the Palestinian Authority (which had it before the Hamas coup of 2006).

I doubt we will move that far, but who knows???

NOTE: I just had to take a break from this posting.  A rocket alert sounded here in western Jerusalem!  I have not yet accessed any information about anything landing here although I heard explosions, as did a friend I checked with.

They are showering the country with rockets.  I hope we bomb the heads off of Hamas leaders.

What I am gleaning from the various reports shines a somewhat different light on the apparent reluctance of our government to start an action against Hamas sooner.  All that talk about quiet.  The readiness to stop attacking on Friday even as rockets continues to be launched  What is being said now is that this gives Netanyahu an edge within the international community. For it will demand - as it always does once civilians are hit (as inevitably they will be) - that we stop our operation.

The fact is that Obama is already doing this:  He has defended our right to defend ourselves (isn’t that nice?), but that defense is qualified.  We should practice “restraint.”

I will not dignify this with a comment, which is about as much restraint as Obama is going to see.
The idea, now, is that Netanyahu will be able to say that we tried everything to bring quiet – that the war is on the heads of Hamas.

It may work for a while, and it may well be that this was intended from the start.  But what is most important is that we resist that international pressure because we have a right to do what we are doing now.

Arutz Sheva has put up on its site the prayer for the IDF soldiers that was written by Shlomo Goren who was IDF Chief Rabbi:

Please, bookmark this or print it out, and say it every day.  A portion of the prayer:

“May the Almighty cause the enemies who rise up against us to be struck down before them.  May the Holy One, Blessed is He, preserve and rescue our fighters from every trouble and distress and from every plague and illness, and may He send blessing and success in their every endeavor.

“May he lead our enemies under our soldiers’ sway and may He grant them salvation and crown them with victory. And may there be fulfilled for them the verse: For it is the Lord your God, Who goes with you to battle your enemies for you to save you.” 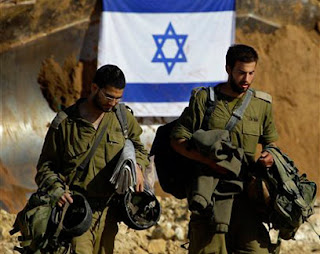 I have other information that I will share in my next posting – including information about proportionality, which is poorly understood.

Here I want to present a few videos, to provide a clearer, more potent picture of what Israel has been dealing with.  These videos reflect previous bombing experiences, not just the current one. But it’s the same thing.  We’ve been dealing with it off and on (between times of “quiet”) for some time now.  The south of Israel, and especially Sderot and communities close to the border with Gaza, have suffered the most.  But now the reach of Hamas rockets is greater.


The term is “tzeva adom,” which means “color red,” but less literally, “code red,” the warning that a rocket is coming.  In the communities near the Gaza border, the time between the sounding of the warning and the arrival of the rocket is 15 seconds.


Save these and share them. When the world starts to complain about what Israel is doing to the poor people of Gaza, show them how Israel has suffered – in a way no other country would tolerate, while everyone has ignored our situation.