Palestinians Dislike Hamas -- But Not Their Methods

According to a Pew Research Poll, Palestinian Opinion of Hamas Declines

Overall, most people surveyed have an unfavorable impression of Hamas, a militant Palestinian organization that is in control of the Gaza Strip and designated a terrorist organization by the U.S. This includes people who live under its rule.

More than half in the Palestinian territories (53%) have an unfavorable view of Hamas, with only about a third (35%) expressing positive views. Negative views are higher in the Hamas-led Gaza Strip (63%), up from 54% in 2013. In the Fatah-led West Bank, 47% have an unfavorable opinion of Hamas.


Opinions of Hamas have been deteriorating in the Palestinian territories since it took control of the Gaza Strip in 2007. Then, 62% of Palestinians had a favorable view of the extremist group, while a third had negative views. Now, only about a third have positive opinions and more than half view Hamas negatively. 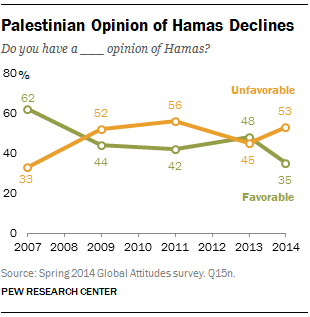 In the Middle East, support for suicide bombing is highest in the Palestinian territories, where 46% of Muslims say that it is often or sometimes justified in order to defend Islam. Support is particularly high among Muslims in Gaza (62%) versus those in the West Bank (36%). 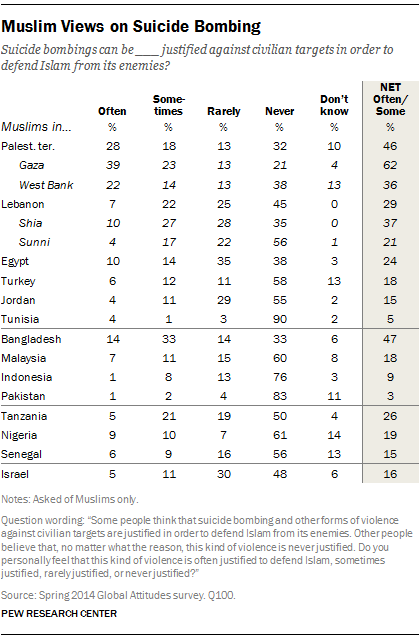 This goes hand in hand with a post by Elder of Ziyon that notes that 60% of Palestinians Arabs say five year national goal is to destroy Israel:

The Washington Institute for Near East Policy recently commissioned a survey of Arabs in the West Bank and Gaza. The results prove yet again that Palestinian Arab attitudes towards Israel are anything but peaceful.

The clear majority of Palestinians polled - 60%, including 55% in the West Bank - say that their five year national goal should be "to work toward reclaiming all of historic Palestine from the river to the sea."

Yes, despite the insistence of biased "experts" who claim that Palestinian Arabs support a two-state solution and only want peace with Israel, the fact is that a convincing majority explicitly say that the real goal is to eliminate Israel altogether.

But these facts will probably not stop the Obama administration from pressuring Israel from making more unilateral concessions in order to bring the "moderate" Abbas back to the negotiating table.


Technorati Tag: Israel and Gaza and Hamas and Suicide Bombings.